From Grand Rapids to Chicago to Manchester to York

I have arrived in York, England safe and sound. Let me back up a bit and tell you how we got here. We flew from Grand Rapids to Chicago, which was short and painless. I’ll skip over most of the 5-hour-layover-in-Chicago part, but I will mention that many of us played 3 great rounds of telephone pictionary–a hilarious game, which made the time pass really fast, and before we knew it, it was time to board. Most of the plane ride was dark, but we finally came upon the English coast. It was still early in the morning and the sun had not risen. The city lights on the coast were absolutely gorgeous. We turned over Manchester and the winding streets and twinkling lights of the city were magical. We arrived at Manchester International Airport at 6:40 AM, a little earlier than scheduled, which was good. Customs did not take long at all. They simply asked why I was coming to live in England and how I would support myself financially in the country. But arriving at such an early hour meant we had a full day ahead of us. Let me just tell you now, it was a weird day.

When I heard the customs lady’s accent, I had to remind myself, “Holy cow, I’m in England. They speak English like that here.” It wasn’t long after that that we got our luggage from the carousel and headed out to meet our professor. We boarded a coach to York. The journey took a little over 2 hours. I felt like sleeping, but couldn’t for the excitement.

Green winter in England, near York (on coach ride)

This country is so green, even in winter. Although the views from the highway were not all that spectacular because the highway–or should I say “dual carriageways”–that we were on twisted and turned quite a bit through what I can only describe as “valleys.” But when we did come upon open space, it was gorgeous. The buildings and homes in the villages and cities seem to be scattered among the hills, randomly popping out of the earth. Everything has a wet, rusty look from a distance, and there was still snow drawing down some of the hilltops like mini-glaciers. Tall, white wind turbines turned in the distance. It was a sunny and warm day with scattered white clouds, supposedly the first day like it in about 2 weeks. Gorgeous.

When we finally neared York, it seemed as though we circled the whole city first. I could spot the York Minster–the tall cathedral in the center of the city–in the distance, but I wondered why the coach driver wasn’t driving directly into the city. But as soon as we entered the city, I fell in love. We drove past rows of quaint houses, through narrow streets, and by old walls and hedgerows. Everything seems like it’s falling apart, though in a good way–giving a strong sense of history and character.

The half of us Calvin students that were to live in the Grange (apartment grounds) were dropped off first. We filled out a few housing contracts, then were told to go to our individual rooms. I was placed in 3 Cruse House, Room 3. My flatmates opened the door before I could even knock. They had seen me coming. They all greeted me quite noisily, and after I had settled in my room I went to talk with them for a while. Their names are Jack, Lee, Dan, and Luke–and I met a George from next door–I still don’t have all their names straight. They were pretty funny, although I had a lot of trouble deciphering what they were saying at times. They all had very thick accents. When I met George, I thought he said his name was “Josh,” for example. One of them, Dan, looks freakishly like one of my cousins–Justin D.O.–at least I thought so in my tired state (if you are reading this, you probably know who he is). My flatmates told me they expected me to be Norwegian or Italian, but not American. I told them I was from Michigan, but they didn’t seem to have a clue where it is, even when I did the dorky “hand thing” (you Michiganders will know what I’m talking about). 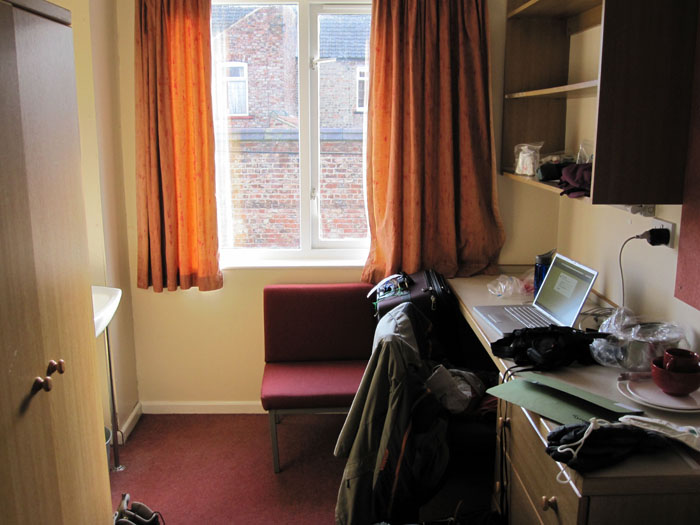 We didn’t have to do anything until later that afternoon, so I just went up to my room and finally slept for a good hour and a half. Then we had a IT session where I finally got to check email and send word home that I had made it. I also got instructions to take back to my apartment on how to set up the wireless connection there. I really didn’t pay much attention at that session because I was so out of it at that point. It got even worse near 6 PM when we had a reception for international students. I could barely stay awake, not to mention talk to other people from all over the world. Prof. Ward walked all of us “Grangers” back and pointed out the best routes to Sainsbury’s and Morrisons (both grocery stores)–and the York Minster–along the way. After I got into my room and settled again, I slept. All night. A full 12 hours. Thank God for sleep! 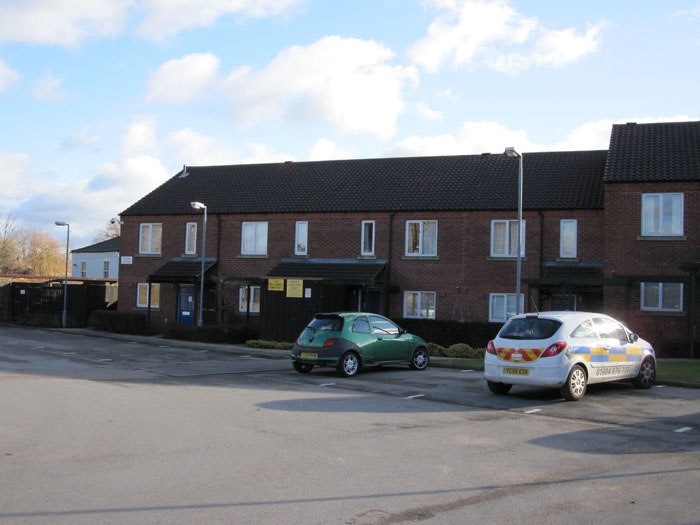