Day two was much better than day one in York. I was finally rested and it actually felt like morning in the morning. I walked to campus and found the dining hall. I guess I had half of a full English breakfast. I had eggs, sausage, and beans. Yum. We had to attend a few short and scripted sessions before noon, one on how to use the library and another about campus activities. The latter ended quite hilariously when some girl yelled out to the VP of student activities, Gary Milner, “Are you single?”

At lunch I had a frittata, vegetables, and milk. (I hadn’t had milk for a couple of days, and some of you know how much I like to drink milk.) I led a few friends who live in the Lord Mayor’s Walk residence halls to the Grange, for they had not yet made their way back there. It usually only takes 5 minutes, but we made it a leisurely walk, taking pictures of the row houses and cool alleyways along the way. … By the way, there are many houses and buildings with the sign TO LET, meaning “for sale or for rent,” but I keep reading it as TOILET. I think it would be a great prank to go all around the city adding the letter “I” to all the TO LETs. 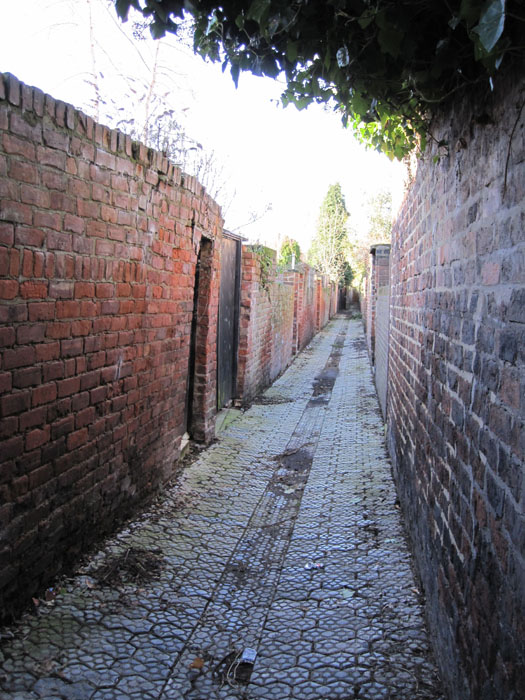 Alleyway on the way to the Grange

We mustered into a larger group and went shopping at Morrisons, apparently one of the larger stores in the area. It’s a lot like our Meijer, I guess. I got a few essentials for my room and stamps for postcards. When I asked for stamps, the cashier woman said “Stomps?” (that’s what it sounds like to me) “Would you like 6 by firsts, 12 by firsts, or 18 by firsts?” Uhh… I went with 6. I had no clue what the phrase “by firsts” meant, but found out soon enough that they were first class stamps (“stomps”) for the Royal Mail. It was getting dark fast, but a few of us headed into the City Centre to do a bit more poking around in shops later that day. I got my postcards at Boyes, and got a taste of the pedestrian life of York. It’s pretty busy downtown–all the time.

For dinner I had a bread and butter pudding (not like the American pudding) with custard. It was more like a casserole made of, well, bread and butter, with raisins in it. I also had a huge roll that was delicious. When I paid for my food, I fumbled with the coins because I did not know (and still don’t quite know) all the different denominations. Their paper money makes sense because the bills get smaller as the denominations do, but their coins are all wacky sizes that have not correlation with their value. The cashier ended up picking out the right coins from my hand.

That night most of us went over to our professor’s house. We met his wife, made conversation, and played Bananagrams (almost like Speed Scrabble). I went back to the Grange pretty exhausted, but found my family online and had a good first video chat with them. So far I am satisfied with the Internet connection here. There’s nothing like coming back from long days out in the city to an inbox full of emails from home and news from America. We live in a wonderful age.

This is going to be a long post, so stick with me if you want to read about day 3. I don’t know if I’ll be able to keep up this day-by-day account in the future, but since a lot of this is new to me and I haven’t started classes yet, I have quite a bit of time to sit down and write. Here it goes.

I didn’t wake up to my alarm clock, so either I slept through it or the darned thing didn’t work. I made a note to go out and find a new one. It was just a cheap battery one I bought back in the States. I opened my curtains and found that it had frosted/snowed lightly during the night. I bundled up and headed outside, only to find the Blue Gate (the entrance to the Grange) locked! It was 9:30 in the morning, but the Gate is supposed to be opened everyday at 7. I turned around to find one of my fellow Calvin students, Melissa L. So we headed the long way around to campus, down Ramsay Close and Huntington Road, instead of taking the “shortcut.” 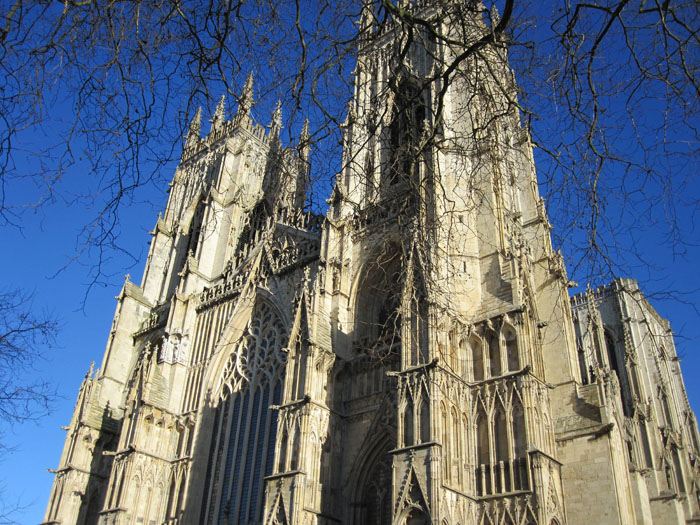 York Minster in all its glory

I didn’t have anything in particular planned for this day but to see more of the City Centre and the York Minster. I headed downtown with Melissa and Jenica. We stopped by the gorgeous York Minster along the way. (I’m definitely going back there again and again.) Then we browsed through several book, antique, and novelty shops. (There was one crazy shop where they sold swords and armor!) At Barbican Bookshop I found a nice detailed map of the city. (Let me just say this, but I am bad at directions in this city. Hardly any of the streets run parallel, and there are many alleyways and shortcuts that are not even mapped, it is easy to get lost. Hopefully that will change by the end of the semester.) A festival was going on celebrating the residents of York, and there were many open air markets of fresh vegetables and meat, candy, antiques and novelties–you name it. The sights, sounds, and smells were wonderful. We also saw several street acts, including a Punch and Judy puppet show and a man balancing a ladder on his chin. I love York. 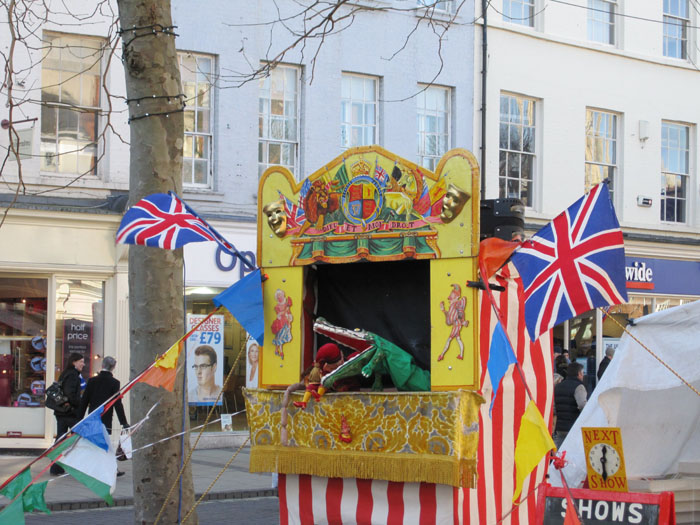 We came upon a platform on the River Ouse. (Actually, at this point I’m not even sure if that was actually the Ouse, but I’ll say it is.) There were some geese in the water, and they looked so peaceful… until they attacked us! They flew up out of the water and surrounded us. Jenica and I retreated up the steps, but Melissa was paralyzed. The marched after us threateningly and gave us an evil eye. 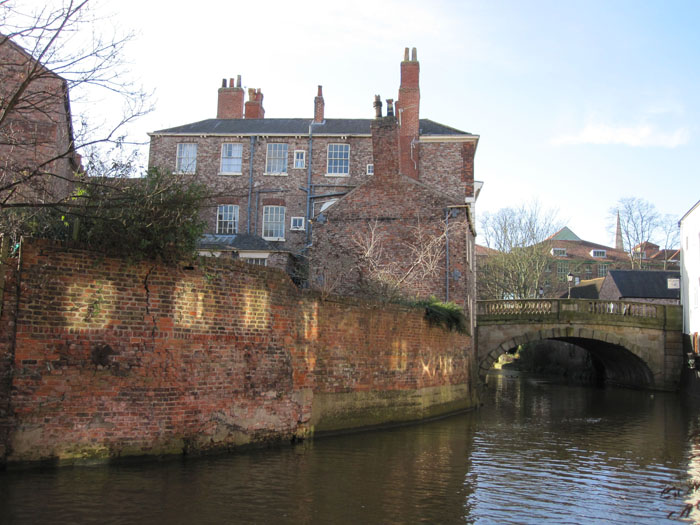 Bridge over the River Ouse 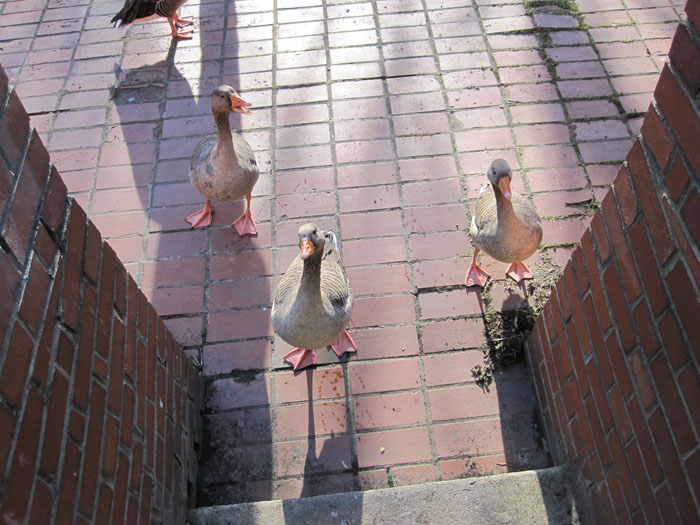 After we escaped that we found (or went back–we passed through it so many times) the Shambles, a narrow winding street with loads of shops. It was the inspiration for Diagon Alley in Harry Potter. The buildings look as if they are going to tip in on each other. We ate at a great sandwich shop (more like a closet in the wall) called Mr Sandwich. It was only a pound per sandwich. I had a orange Fanta with my bacon and sausage sub. (It’s comparable to–maybe even better than–Jimmy John’s in the states, but I think this was a one-of-a-kind, not a chain.) 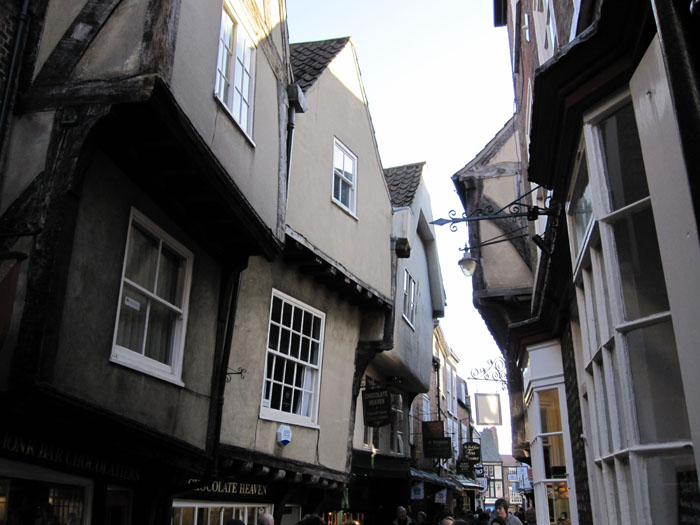 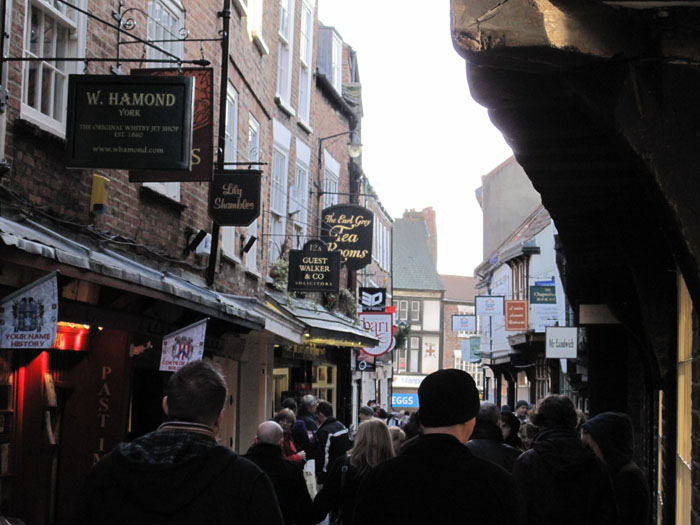 The Shambles, inspiration for Diagon Alley in Harry Potter

After returning to our residences to rest our poor aching feet for a while, six of us out for dinner. The dining halls are closed on weekends, and I don’t feel much like cooking for myself (not this week at least). We were going to go to a place called Keystones, but it was too crowded. We couldn’t find a table. So we walked up Monkgate (that’s the name of the street, I think) and found an Indian food restaurant called The Viceroy of India. I did not know most or any of the food’s names, but luckily we had Melissa L. with us, who had eaten Indian before. My personal favorite was the “nan” bread that we dipped into the spicy sauces (sort of like pita bread). 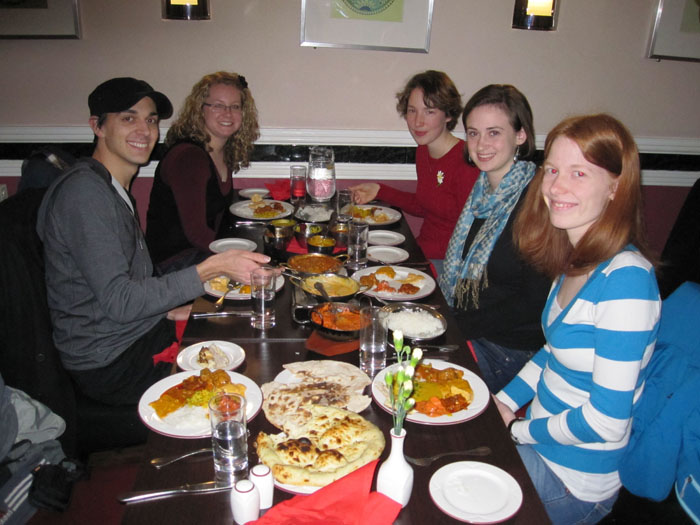 Eating Indian food at the Viceroy of India

A great meal in our bellies we headed to our professor’s house again. We played a hilarious game of “What If?” Basically, one person reads a previously written question on their paper (given to them at random from someone else in the room), and the person to their right reads the answer to a completely different, but corresponding (number-wise) question. We got many funny responses, but the best of the night by far was when John read the question, “What if we were all shipped back home on Monday?” and our professor’s answer was, “No sex ever.” (which was actually the answer to some question about men getting pregnant or something). We were rolling on the floor laughing. We also played a great game of “Fishbowl” that involved elements of Catchphrase, Taboo, and charades, but I won’t go into details on that one. All I have to say is great times in York.