First Week of Classes in York

My schedule here in York is pretty front-loaded. I have 3 classes on Monday: both of my York St John University classes and one of my Calvin College classes, British Literature. That means I have a relatively light schedule class-wise for the rest of the week. Tuesday is British Culture class, and Thursday is the second half of my British Literature class. That means I have Wednesdays and Fridays off. It’s not all easy though. We do have a lot of reading and writing assignments for my Calvin classes, and between figuring out how to live here in York and getting used to British Culture and all the class excursions (which will normally be on Wednesdays and Weekends) there’s always something to do around here. Not to mention, it is essential that I make time for fun, too. It would be impossible to be away from home for this long if I did not have fun. 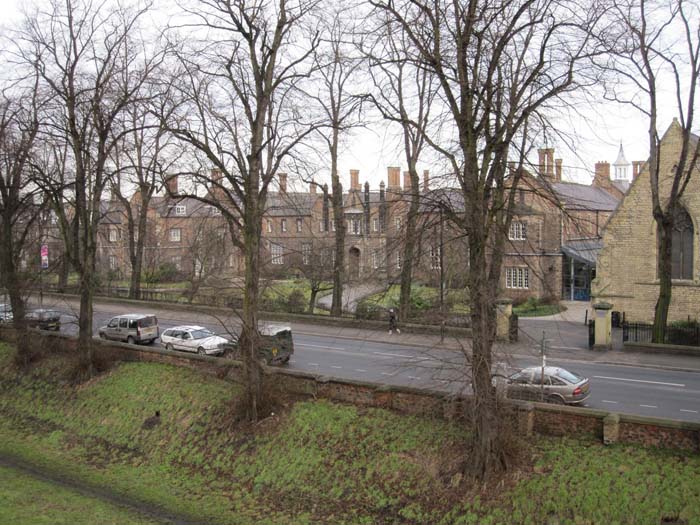 I haven’t written for a few days so that I could get a better picture of the typical school week. Let me start at Monday. I woke up earlier than I had to because I wanted to explore the campus and find out where all my classes were. York St John University is very small and confusing. Imagine Calvin’s Seminary but with a complex jumble of buildings sprawled here and there on that small plot of land. (It may be actually a little bigger than Calvin Seminary’s plot of land, but you get the picture.) But YSJ has a much more modern campus than Calvin College. You’d expect to see old, decrepit rooms inside the old buildings, but actually most of the buildings are quite updated on the inside. It’s very deceiving. DeGrey Court, of all the buildings, is very contemporary. Just about every other wall is painted a different bright color. Green, orange, yellow, blue. And the furniture has a very industrial look and feel. … Granted, I do not have a class in the Quad–apparently the oldest part of the campus, a square block of buildings with a courtyard in the center–and have yet to go inside it.

My Roads to Revolution class should be very interesting. My tutor (by the way, the professors here are not called professors; they are called tutors), Bob Whiting is very nice and engaging. But when I see his name I can only think of Russel from the Pixar movie Up, imitating the bird, “Bob white! Bob white!”  The module is about what happened to cause the civil war in England in the 1600s, covering the reigns of Queen Elizabeth I and Kings James I and Charles I.

I didn’t know what to expect with my second YSJ module, the Medium is the Message. I thought it would be more like an Art History course mixed with a Communication course–and it is–but it’s more like a Media Studies course. The tutor is Alan Clarke. He seemed nice and helpful too. Both tutors said they’d help me figure out the British system. What they often do in “uni” (that’s what all the students call it) is give you two or three big assignments on the first day and say “Complete these by the end of the semester.” The lectures and sessions are merely there to help you write a paper or prepare for an examination. Therefore, studying here requires a lot more self-motivation. They give a suggested reading list, but you don’t have to buy the books. They have a library here with several copies of each book you need to read or peruse and you can check them out for a month at a time with free renewals (unless the books are on hold). We’ll see how the YSJ classes go…

But I know I’m going to enjoy most the Calvin classes with Dean Ward–Tracking British Literature and British Culture. Right now we are studying William Wordsworth and Samuel Taylor Coleridge in Literature, and we are starting our commonplace books in Culture. … I’m skipping ahead a bit, but today, Thursday, before class, I bought a blank sketchbook from the Student Union campus store to use for my commonplace book. Basically, it’s a scrapbook/journal/memory book of the semester. I’ve drawn a few drawings and taped several receipts, wrappers, and brochures in it already. It’s going to be a piece of art when I’m finished. …

On Tuesday after class I headed with a group of people to the York Railway Station to get a Young Person’s Railcard, which will allow me to get discounted prices on train tickets. It was £26, but well worth it. I also got to see more of the city and the River Ouse along the way. It was raining outside–the first time that it rained that much during the day the whole time we’ve been here. (Although I think it rains during the night quite a bit. I wouldn’t know. I’m sleeping.) 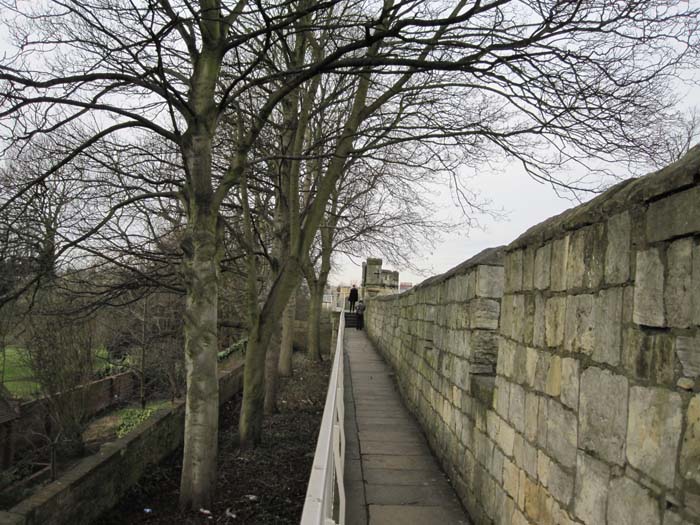 Wednesday I had no class. Having finished my reading the night before, I had nothing but fun things planned for the day. I gathered a group of people and we walked the old City Wall from Monk Bar (a city gate) to Bootham Bar (another city gate). The wall is a fabulous way to see the city. We saw dormant gardens in the backyards of houses inside the walls. I can only imagine how beautiful and colorful the gardens will be in the springtime. The grass here is very green, even in winter. How much greener will it be in the spring? 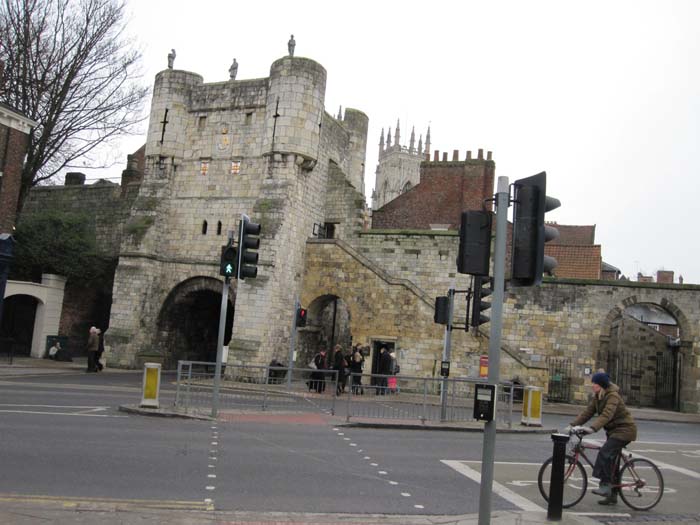 Bootham Bar, across from the City Art Gallery, an entrance to the City Wall

We got off at the City Art Gallery, a stately building on Gillygate. Admission was free. It was a relatively small gallery (I think over half of it was under renovation or getting ready for a bigger exhibition), but had some great portrait and vanitas paintings–interestingly, quite a fair number by Dutch painters. For lunch I had a chicken supreme pasty at the Cornish Pasty Bakery, a neat yellow and blue store (there’s at least 2 in the city). We sat in one of the city’s squares while pigeons swarmed at our feet, rushing to peck at the tiniest crumb that fell from our pasties. 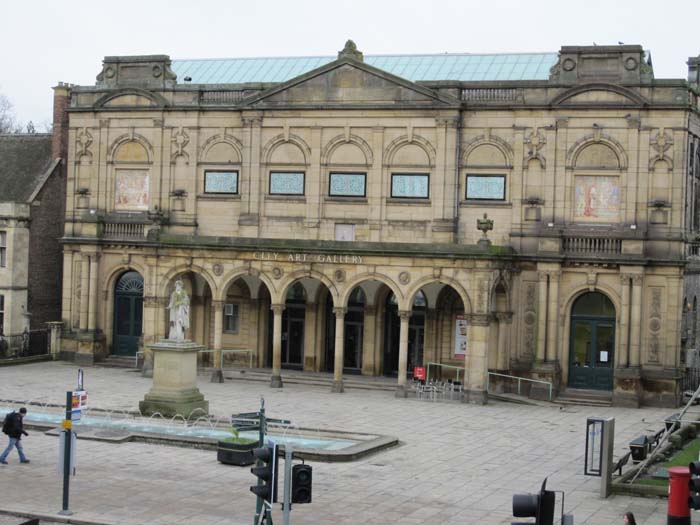 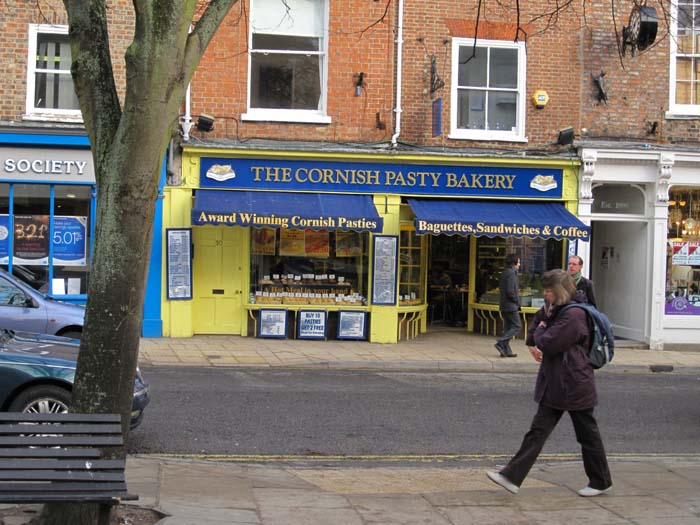 That night we played a great game of Quiddler (with several hilarious moments) at Melissa L.’s house in Boyle. (Quiddler is a card game that is sort of like Speed Scrabble, by the way.) We then went to the Spar (a convenient store near campus) and bought a bunch of junk food. I got a cheap chocolate bar called YORKIE: IT’S NOT FOR GIRLS and some Haribo gummies. We then watched Robin Hood: Men in Tights in the dorms. Classic.

It was pretty late when I walked back to the Grange with Melissa and Sanna. It had been snowing quite a bit, and the ground was covered in slush. It was eerily silent, no one was about, and the streetlights glowed a soft orange-yellow. We had to take the long way around because the Blue Gate that is the entrance to the Grange was locked at 11 PM. York is supposedly one of the safest cities in England, but I’m not used to dark alleyways and cobblestone streets at night, making it a bit creepy.

My last class of the week was today, Thursday. I had a toasted scone for breakfast, and after that I went to work on my commonplace book in the library. (I previously mentioned that I bought it in the campus store today.) It was the second half of Brit. Lit. We talked more about Wordsworth and got deep on the nature-side of our selves. We also got our allowance for week two. I then spent the rest of the afternoon working on my commonplace book with others. I worked on it till dinner–breaded chicken and corn. Tonight people are going out to the Three-Legged Mare, supposedly one of the best pubs in York. I think I’ll join them. … So it turns out that even days that we don’t have excursions can turn out to be quite eventful.