Railways and a Sojourn in Wales

I started off my second week of class with a full English breakfast. Recipe: sausage, bacon, poached egg, beans, tomato, and hash browns. Needless to say, it was scrumptious. The tutor of Roads to Revolution class continued his lecture on the paths to the English civil war, my Medium is the Message tutor talked about technology, and, in Tracking British Literature we wondered about Wordsworth. We also heard the sad news that one of the 27 Calvin students left for home. I don’t know the full reasons why as of yet, but I hope that person is doing well, and I hope that they know they will be missed here as well! (I’ll leave them unnamed for their privacy.)

On Tuesday in British Culture class we shared our commonplace books in the works and began our tapestry of British Culture through the ages. I am in the “Sciences” group. There wasn’t much for our group to say since science, as we think of it, is a relatively recent phenomena. I gave a “weather forecast” for our group, talking about the 4 main weather systems that affect Britain’s climate, drawing a map of the island on the board with sunshine, wind, and snow symbols. After lunch, I went to chapel with Melissa A., Jenica, and Mary. There we meditated on Luke 12:1-3, and met the chaplains Jem, Sharon, and Chris. They were very amiable and were glad that we came (seeing we were the only students that did come). After chapel a group of us headed to Sainsbury’s for a few needed items (and some not-so-needed items!). Let me just say that Sainsbury’s Basics brand is a godsend. I got 12 snack bags, 3 bars of soap, 24 Jaffa cakes, 80 tea bags, a cup of soup, and a bag of salted peanuts all for 1 pound 87 (£1.87)! I vowed to shop for Sainsbury’s Basics brand as much as I could in the future. That night (and I’m almost embarrassed to admit this) I went to watch the TV mini-series version of Pride and Prejudice with some girls. I mostly worked on my commonplace book while the girls gushed about how much they loved this version and hated Keira Knightley in the new version and gave me advice on the “dos” and “don’ts” of proposing. Need I say it was a hilarious time? … Before bed I read Samuel Taylor Coleridge’s “Rime of the Ancyent Marinere.” (Not sure it was such a good idea to read a nightmarish poem before bed, but hey.)

Finally I’m starting to get at what the title of this post hints at: Wednesday’s excursion to the National Railway Museum. It was cool and all, but trains can only be so interesting. There are two things of note, to me, that stick out in my mind as the best parts of the museum. First, I learned about “Railway Collecting Dogs,” dogs that would make their way through rail stations with tins strapped to their backs, collecting money for charities and orphanages. Second, they had a full scale cross-section of the “Chunnel” (the Channel Tunnel) between England and France with a Eurostar train running through it. I was amazed at the immensity of it. Other than that, there were a few trains that reminded me of Harry Potter. … That night we continued watching Pride and Prejudice, and Christina gave me a “Euro-hawk,” much to the amusement of the other girls. But that is what happens when you are on a semester where the female to male ratio is 4:1. 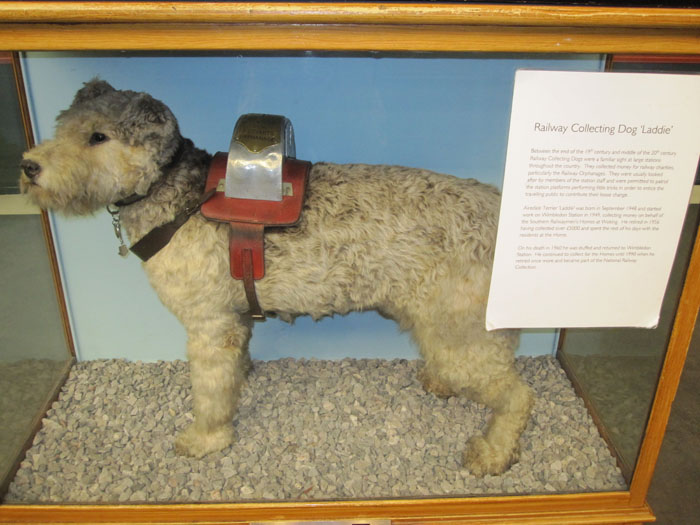 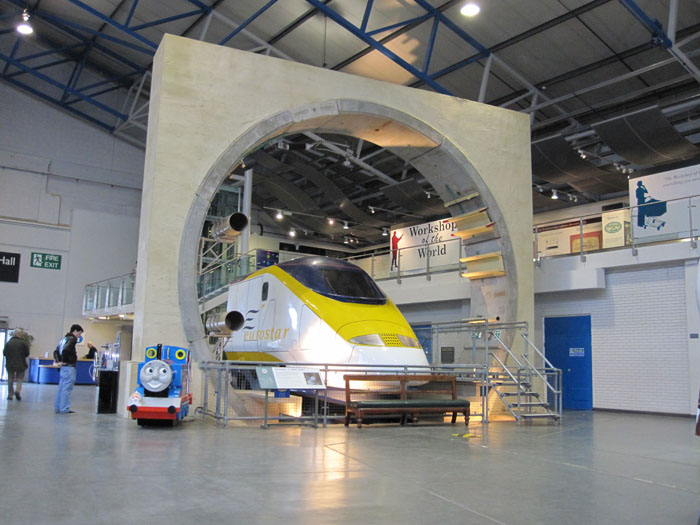 Cross-section of the Chunnel

Thursday I read more Wuthering Heights during the day, had Irish lamb stew for lunch, and Toad-in-the-Hole for dinner. Toad-in-the-hole comprises of sausage baked into Yorkshire pudding, a bread-like, elephant-ear-esque substance that isn’t anything like American pudding. Absolutely yummy. I went to bed at 8 PM in anticipation of waking up at 1 AM to meet with my group at 2 to depart for Wales at 3. I couldn’t really sleep most of the night. Knowing I have to travel always makes me too anxious.

Melissa L., Erin, Teresa, John, and I boarded the train from York to Manchester Piccadilly at approximately 3 AM. Whe the conductor came around and checked our tickets, he told us we were on the wrong train! Ah! Of all things, we had gotten on the train an hour earlier than we were supposed to! When we bought the tickets online, we thought we were getting the 3 AM tickets, but in fact, our printed tickets were 4 AM tickets. That’s what we get for not double-checking. But it was not so bad. The conductor let us off at Leeds without charging us a fine, and we hopped on the Manchester Piccadilly train there.

We arrived in Llandudno (it is pronounced somewhat like “tchlon-DID-no”), Wales, around 9:30 AM and waited at a very greasy Molly’s Cafe for the second group of us (Melissa A., Jenica, Mary, Joel, and Jennifer) to arrive. After their arrival, we found our hostel and were greeting by an affable hostess. She allowed us to put our bags in our rooms for the day so we didn’t have to carry them all around. It was a big hostel, but felt very cozy and comfortable. We then headed to the Library/Information Centre to see what we should do for the day. After a lunch of pasties and baps (I had a ham and coleslaw bap/sandwich), we decided to hop on a bus to Conwy, to the south of Llandudno, and explore the castle and city walls there. All the signs in Wales are bilingual, as Welsh and English are both official languages in Wales. Here are some examples: ysbwriel = litter, swyddfa’r post = post office, siopwyr = shoppers, dim parcio = no parking, bagiwch a biniwch = bag it and bin it, safle bws = bus stop… 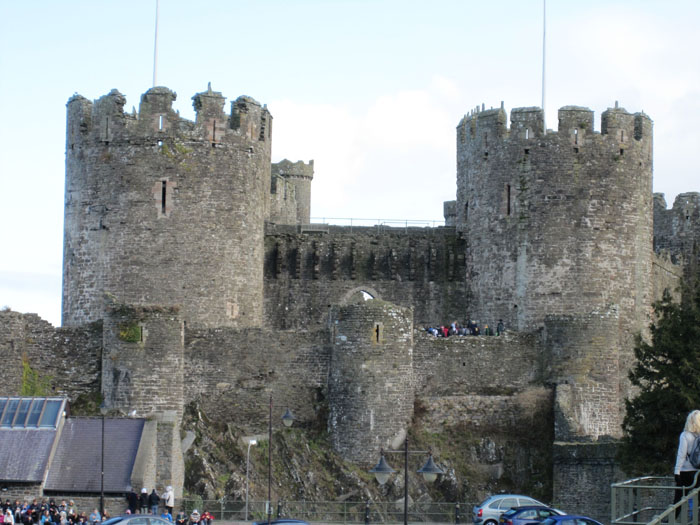 The sun was brilliant, giving us the perfect afternoon to stroll along the city walls and up and down the castle towers. It had to be one of the most intact castles I’ve ever seen. We had lots of fun climbing the winding stairs and peering down into the castle innards. The views of the landscape were spectacular and we could see the harbor of Conwy lined with boats and the mist hanging low in the valleys of Snowdonia. I’ll let some of my pictures speak for themselves here. … After dinner at a local pub (which incidentally had the same exact menu as Cross Keys in York), we had a night of fun and games. We all bought junk food and candy at Poundland and played Quiddler and the “Ha!” game, lying on our stomachs and making guttural “ha” noises much to our merriment. … I slept a full 12 hours that night, and soundly. (We all went to bed around 10 PM and woke up at 8 AM.) 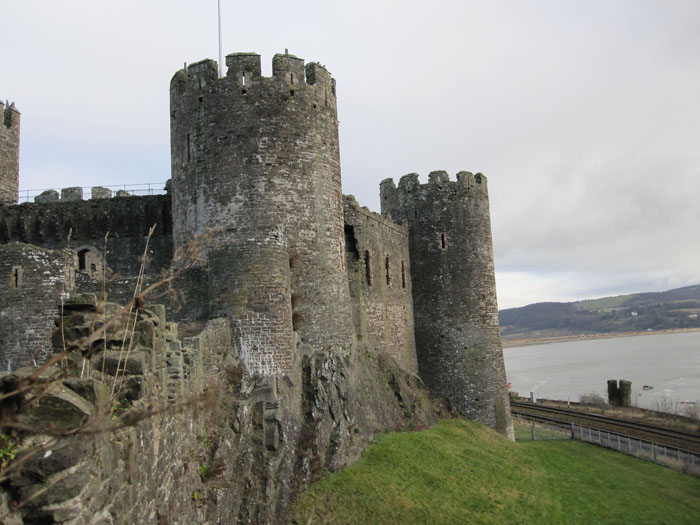 Conwy Castle from the city walls 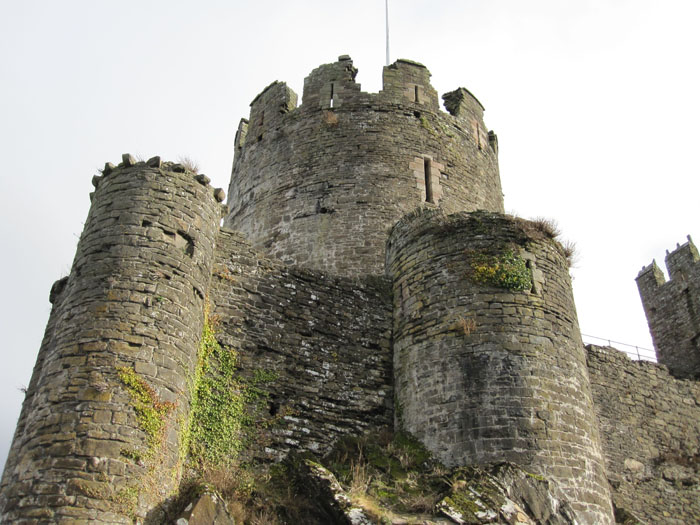 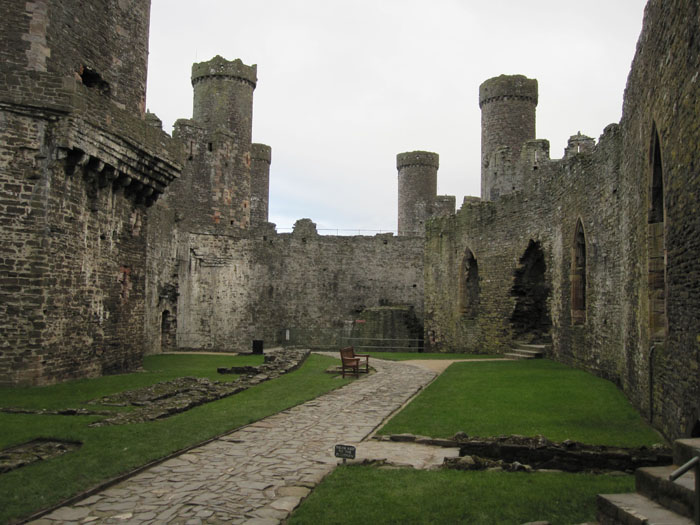 Innards of the castle 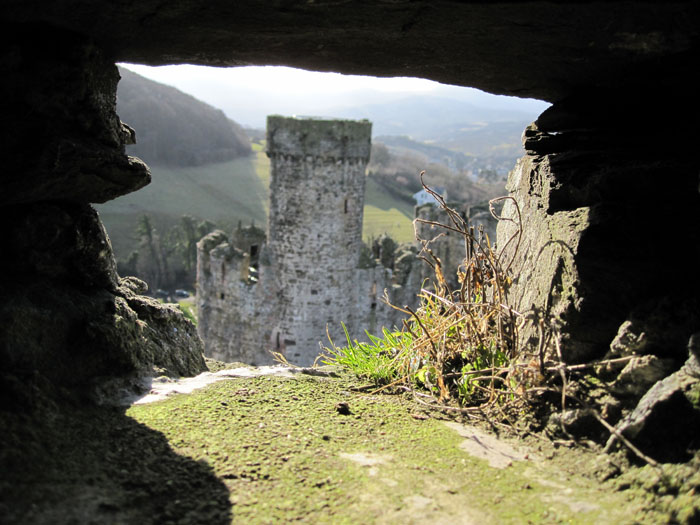 View through a tower window 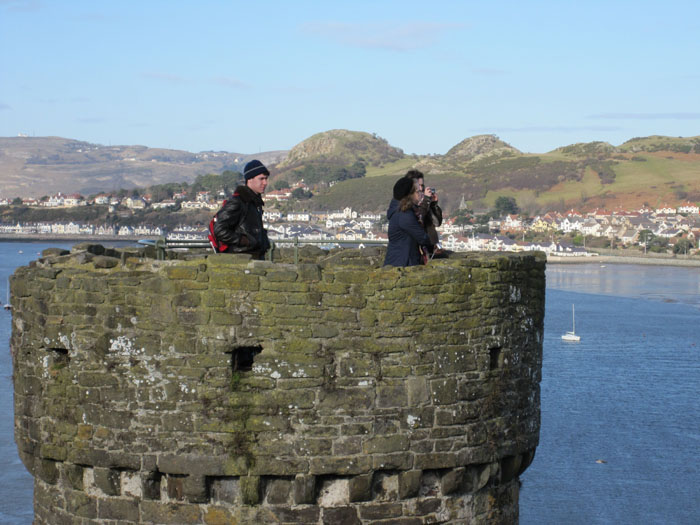 John, Jenica, and Melissa A. on an adjacent tower 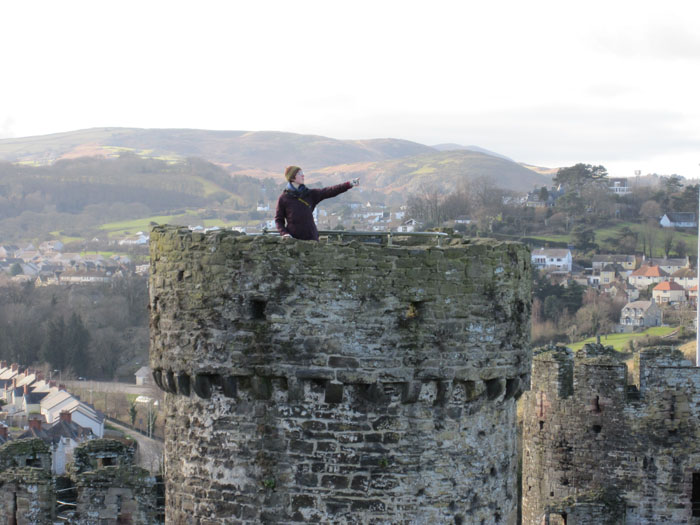 Melissa L. surveys the land from the castle tower 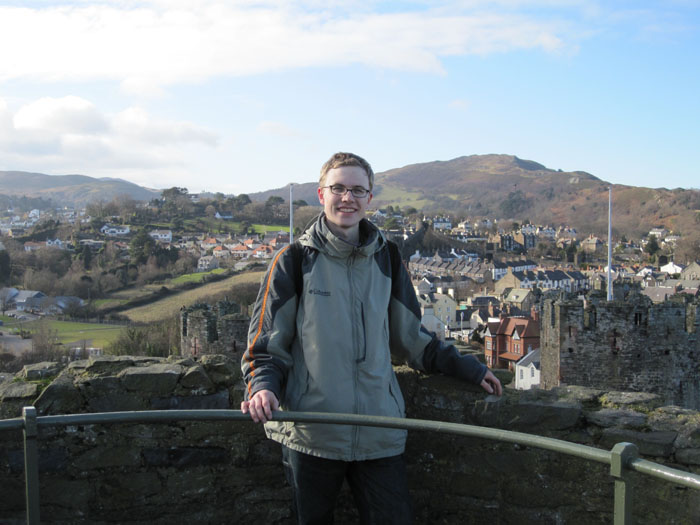 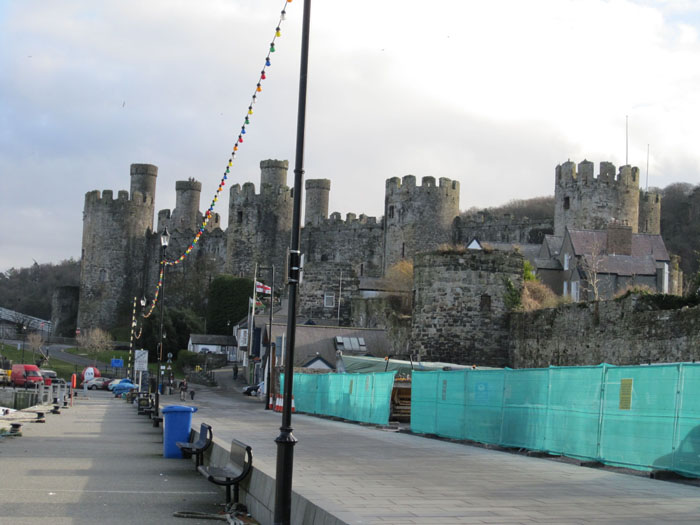 The castle from the beach walk

The next day we awoke to a continental breakfast of tea, toast, and cereal. We discussed our plans for the day and Melissa A., Mary, and I decided we wanted to explore more of the interior of Snowdonia National Park. The rest of the group went off the explore the Great Orme of Llandudno, shop, and visit a pub to watch the Wales v. France rugby game. Our little group of three took an hour-long bus ride to Betws-y-Coed, Wales, in the heart of Snowdonia. (It’s is pronounced somewhat like “bet-OOS-e-could”) A guide in the visitor centre told us about a nice 2-hour hike up to a mountain lake called Elsie Lake (Llyn Elsi in Welsh). We decided we would have a picnic lunch at the top, so we bought sandwiches, drinks, and snacks at the local Spar (they’re everywhere!) and hiked up a steep trail. 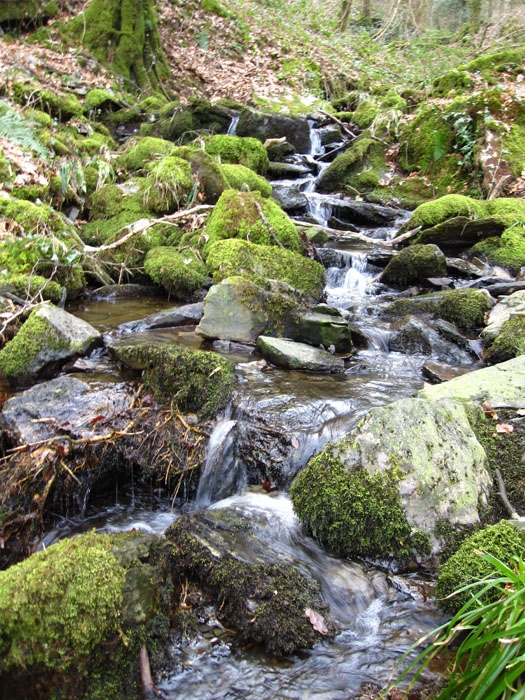 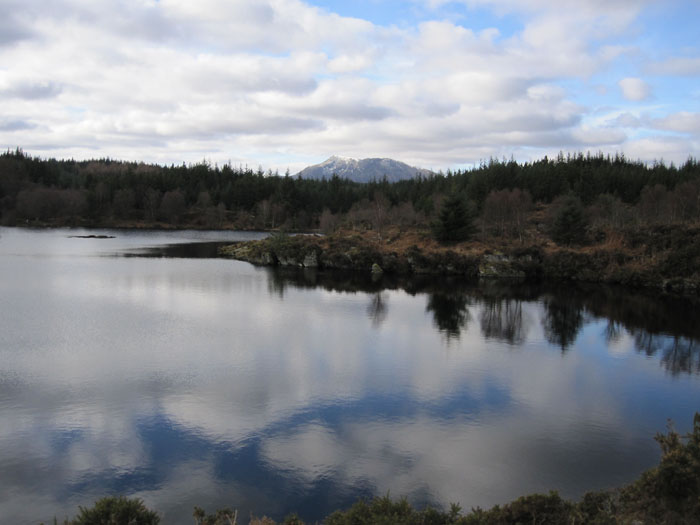 Everything was covered in green. Moss carpeted the forest floor and ancient stone walls and houses were in the process of being reclaimed by nature by vines and moss. We stopped at several babbling waterfalls and looked to the distance where horses and sheep grazed on hillside pastures. Soon enough we came over a ridge and saw the most gorgeous view of landscape I have seen yet on this trip. The snow-capped mountains of Snowdonia rose in the distance over a wintertime forest, while white birds swooped over Elsie Lake, set deep in the plateau of Betws-y-Coed. When we came to the highest point around the lake, we had our lunch by a monument–one of the best picnic lunches ever–and the sun decided to burst behind the clouds at that moment to warm us up. 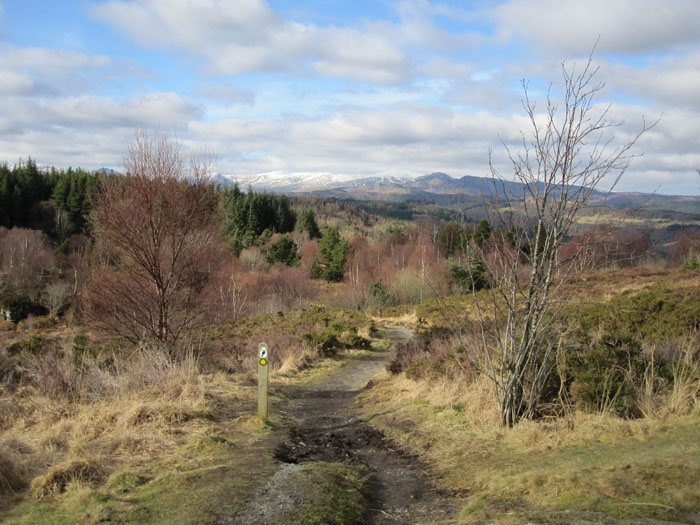 The colors of Snowdonia, even in winter, are hardly describable 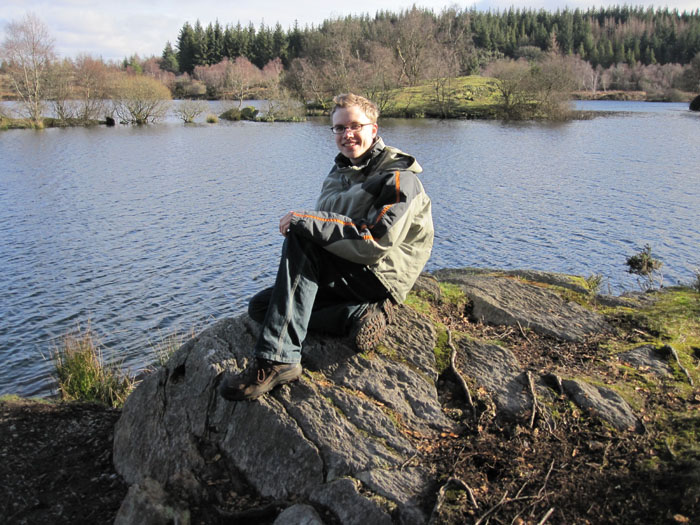 Me sitting on a rock at the edge of Elsie Lake 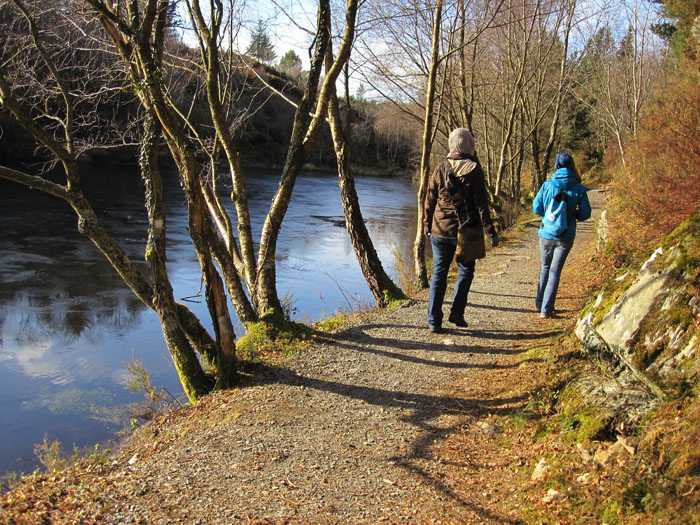 Melissa A. and Mary walking ahead on the trail in the brilliant sun

Our return was faster with gravity on our side, but I spotted a British robin and horses in an adjacent pasture came to us. They licked Melissa and Mary’s hands, but one bit Mary. That was the end of that. Back in town, we had coffee and hot chocolate at Caffi Caban, and then explored the minute town. We went inside St Mary’s Church and a few shops and walked along the river. As it was getting dark, we boarded our return bus. We met back up with our group and we split into two groups again: the early train and the later train. I was on the later train. We later train people had dinner at Tribells. I ordered a pizza for three of us, but it was quite small, so Joel and John gave us some fries to supplement our meal. 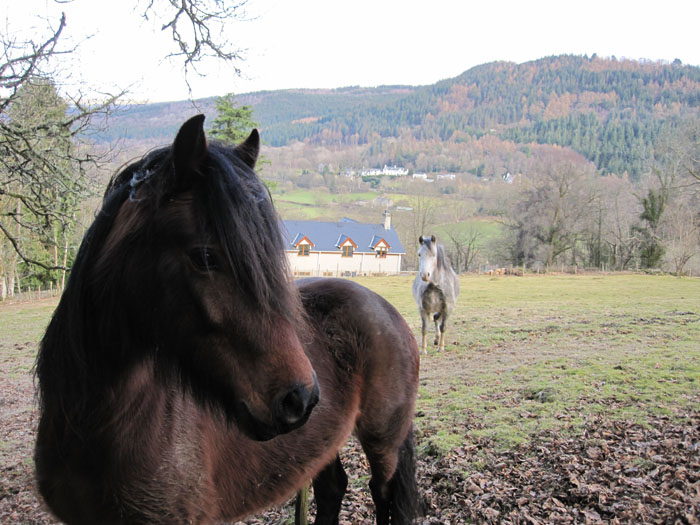 Horses in a nearby pasture came to greet us (and bite Mary!) 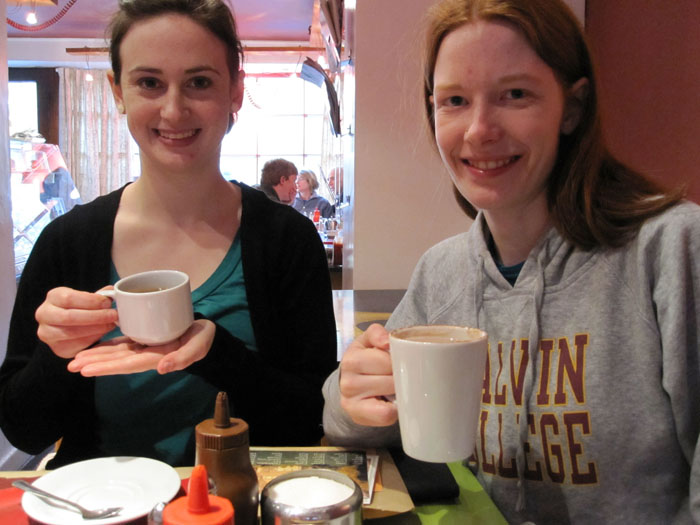 Melissa A. with her Ethiopian coffe and Mary with her hot chocolate in Caffi Caban, Betws-y-Coed, after a long day of hiking

The train ride back to York was interesting. Drunkards in the back of the train were being boisterous, but hilarious at times. One kept repeating the line, “This is an announcement from the BBC. We’ll be stopping at Dixie’s for a cup of tea… and crumpets.” We also had clueless young girls blasting loud music and putting make-up on behind us, making it next to impossible to read more Wuthering Heights. The train after Manchester was much more peaceful. We got back around midnight. I was tired, but very glad I had made the trip. It was “Wales” worth it.