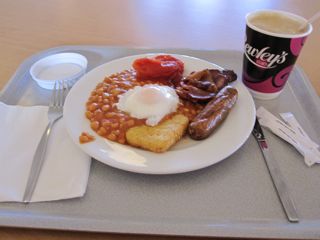 The following article was written for my British Culture: Tapestries and Networks class, one of my Calvin College courses here at York St John University. Therefore, it’s a little different than my typical blog post. Enjoy.

Bangers and mash. Bubble and squeak. Toad-in-the-hole. Spotted dick. No doubt the British sometimes have an odd way of naming their food, but while that list may just sound silly to an American, other food names may just seem like misnomers. Take chips as an example, as in “fish and chips.” In the U.K. chips are what an American would call fries, but crisps are chips. Take pudding as another example. While pudding usually refers to a sweet dessert in the States, pudding in the U.K. has a much broader definition and can be anything from a pastry bread-like substance (like Yorkshire pudding) to sausage made of congealed blood (black pudding) to a lumpy fruitcake-like matter (Christmas pudding). Confused yet? 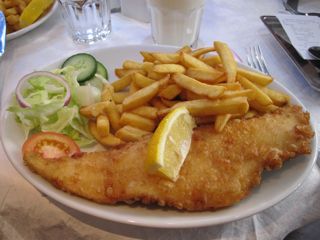 Perhaps the most internationally-recognized British food – fish and chips!

I don’t want to give you the impression that British food is bad. In fact, that’s exactly what I don’t want to do. In America and other parts of the world, it seems just as common to joke about Britain’s bad dental health (which is an topic for another day) as it is to joke about how bad British food is. I want to debunk that myth. The truth is that British food is good. I have yet to find any food here utterly objectionable, yet you should know that, to begin with, I am not that picky. I find that, in general, traditional British food tends to be heartier, but not without variation. Countless influences from around the world have shaped British cuisine, most universally of which, Indian dishes. This is good news for those who are not big meat-and-potatoes fans: you won’t starve in Britain because there is plenty of options for everyone.

By no means am I a connoisseur of British food, but in my 2 months here so far, I’ve tried to try as many foods as possible that are thought of as quintessentially British. I realize taste is subjective, and that not everybody would agree with my likes and dislikes of British cuisine, so I’ll try to stick to my personal experience with British food to date. Now I’m going to have to make some generalizations about the food culture in the U.K, as I don’t have exact numbers on how many people consume, say, fish and chips everyday, but join me as I dig in to some of my favorite British meals. 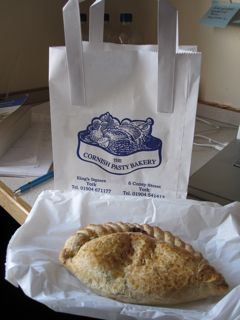 The full English breakfast usually consists of a full platter eggs, sausage, baked beans, bacon, hash browns, and tomato. This is not the only combination, as other foods and ingredients can be added or subtracted from this menu, including mushrooms and toast, but this is more or less the standard. Americans may at least be wondering what the baked beans and tomato are doing in the mix. The answer is that baked beans seem to be eaten with twice as many or more meals here in Britain than in America. If you go to a grocery store like Sainsbury’s, or even a convenience shop like Spar, you’ll always find a full stock of baked beans. As for the tomato, I really don’t know–perhaps it is thrown in for flair? The Brits don’t skimp on the full breakfast, making for a very hearty start to the day. Yet I don’t want to give the impression that they eat full, hot breakfasts everyday. Cereals, tea cakes, scones, and toast with jam or marmalade are probably more common breakfasts on any given day of the week than the smorgasbord that is the full breakfast. 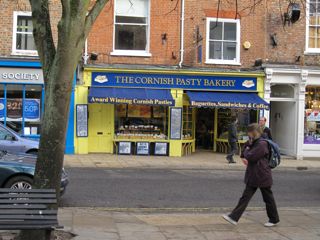 The Cornish Pasty Bakery – one of my favorite pasty shops

Fish and chips, although not popular in Britain till the 19th century, perhaps is the food that first pops into most peoples’ heads when they think of the U.K. The fish part is usually deep fried haddock or cod, continuing in the tradition of the Brits’ love for fried food. As already mentioned (and is widely known), the chips part are what Americans would call French fries. Fish and chips is popular as takeaway (fast food to Americans) and is usually accompanied by salt and vinegar. (Personally, I’ve grown to love a brown sauce called HP sauce. I’m not sure if it’s culturally correct for me to be putting brown sauce on fish and chips, but, hey, it tastes good.) If you are Catholic and it’s Friday, you’re in luck!  One can hardly go anywhere in Britain without finding some kind of fish and chips takeaway place. (Even if you’re not Catholic and it’s not Friday.) On a nice day, it’s not hard to find people walking about the streets or sitting on a bench or low wall eating their fish and chips.

Pasties (see picture for pronunciation) are another essential British treat. Pasty shops are nearly as ubiquitous as fish and chips takeaways. A pasty is a semi-circular pastry stuffed with filling–the filling can be just about anything: ham, chicken, turkey, potatoes, carrots, onions, tomatoes, spices–usually it’s a combination of many ingredients. Thus there are vegetable pasties and meat pasties and pasties with both. The Cornish pasty is perhaps the most renowned. The traditional Cornish pasty is filled with potato, beef, and swede (Swedish turnip), and onion. My favorite pasty shop in York is the Cornish Pasty Bakery, where most pasties are sold for under £3! Pasties, like fish and chips, are another one of those meals you can eat-as-you-go, as I often see people chowing down on a pasty in the city. 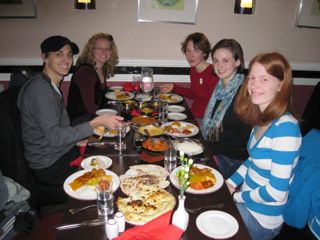 Let me not forget to explain the foods I listed at the beginning. Bangers and mash simply means sausages and mash potatoes. Bubble and squeak, which, unfortunately, I have not had the honor to try yet, is potatoes and cabbage left over from a roast dinner. Spotted dick is a type of pudding (remember, British pudding means something different!) with dried fruit and custard. (Maybe it’s a good thing I haven’t tried spotted dick yet.)

Now I haven’t forgotten toad-in-the-hole. I saved it for last because I absolutely LOVE toad-in-the-hole. (If you’re picturing an amphibious created in some kind of hollow place in the soil–that’s a toad in a hole, not toad-in-the-hole.) Toad-in-the-hole is sausages cooked in Yorkshire pudding batter. By now you may have noticed a trend: the British love their meats and their starchy foods–stuff that makes you feel good on a rainy day (like toad-in-the-hole, Sunday roast, and steak and kidney pie)–and there are many rainy days in the U.K. (Never fear, vegetarians and vegans, there are plenty of options for you, too! Even though I am not one myself, I find that the Brits cater very nicely to vegetarians and the like, even labeling food products in the stores with “vegetarian safe” stickers.) 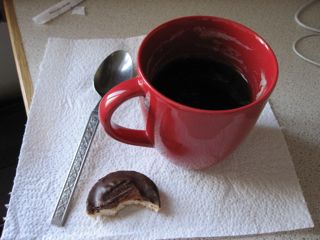 Tea and a half-eaten Jaffa cake

I’ve been focusing on foods that have been born and bred on this island nation, but British cuisine is as diverse and expansive as the nation’s former global empire. British tastes buds have been heavily influenced by the foods of the countries where they formerly held a strong colonial presence. I won’t go into every international delicacy, but focus on just one: Indian food. Indian food has by far had the most impact on British gastronomy, with the introduction of the curry, for example. Indian food is known for being strong and spicy. I will readily admit that I personally had never tried Indian food before coming to Britain. But as a novice, I can already recommend stopping in almost any Indian restaurant in England and trying out the nan and roti bread with your meal. Spicy Indian food defies the myth that all British food is bland and boring–and I have not even gone into Chinese, Turkish, or Mediterranean–even American–food in Britain!

Like a meal, I’ll end with dessert. Spotted dick and Christmas pudding were already given as examples of desserts in the U.K., and just as there’s no shortage of “afters” there’s not shortage of confectionery–sweets, candy! Americans may be used to buying their candy out of bulk bins at supermarkets like Meijer, but the one delightful thing about Britain are its numerous open-air markets and hole-in-the-wall candy shops with an infinite variety of sweets. … On a similar vein, tea and cakes and biscuits (cookies) are still big in Britain. My personal favorites are Hobnobs (an oat cookie) and Jaffa Cakes (cakes with orange filling and covered with chocolate). 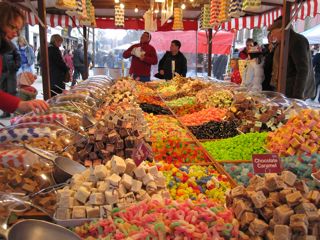 Confectionery – sweets abound at this candy stand in York

Tea (or coffee) time is a time of leisure and relaxation, a time for conversation or reading, to take a break. That perhaps summarizes best British food to me. Not only do many (I would say most) British foods taste good, but they also make you feel good because they can be enjoyed in a wide variety of atmospheres: on-the-go, in a pub, in an international restaurant, on the bench, on low wall, in a park, in a quiet tea room, in a buzzing coffee house–with friends and family or by yourself. In some ways, the context of where the food is eaten and the history and traditions behind the food are just as important here as the food itself.

(If you’re still not convinced that British food is for you from my descriptions of it, let it be known that you can never go wrong with “Nightly Bile Beans” which “Keep you healthy, bright-eyed, and slim!”) 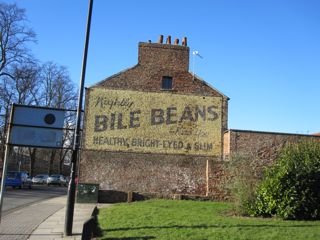