After having heard so many good things about St Thomas with St Maurice Church on Lowther Street (near the Grange, where I live), and even meeting some of its members as a result of my Oral Histories project interview with Mr and Mrs Nye, and attending Tea and Toast (their youth group) at the beginning of the semester, I finally actually attended a Sunday morning service at the church. It was as delightful as I always imagined it. The congregation there is among the friendliest I have met yet, and I got a chance to talk a bit again with the Nyes. It’s a small church, and by no means were the pews full, but they were glad to have me and the other Calvin students there, even though we will be gone in May. I hope to make it back to St Thomas’ after spring break a few more times.

For lunch and dinner I had two Cornish pasties from the Cornish Pasty Bakery: tomato basil and veggie. I enjoyed them as I chugged away at reading Middlemarch. Most of the day I read (a theme this month for sure). Later that afternoon I video chatted with the family. My sister Jessica was home for spring break, so it was nice to see everyone on the same webcam again! … My concentrated reading of the afternoon took a turn for the worse later that evening when I picked up my book again. I became engrossed in watching the U.S. House of Representatives debate the Health Care Reform bill. I don’t usually watch C-SPAN-esque broadcasts, but it’s a strange feeling watching your government deliberate from afar. While Internet makes the world seem smaller, at the same time, I was strangely conscious of the distance. I am in the U.K. They’re in the U.S. I really don’t know a lot about British politics, but apparently an election is going to happen soon and there’s a lot of rumblings that David Cameron and the Conservatives are going to take over. Perhaps, needless to say, I got my politics fix for the night, rendering me scatterbrained and less done with my Middlemarch reading than I would have liked.

In the morning when I woke up, I found out that the Health Care Reform bill passed, and I was actually surprised how much I heard about it hear. Of course, almost everyone in my Calvin group mentioned it or asked about it in some form, but even one of my British classmates brought it up. I won’t go into political perspectives or whatnot because that usually just gets people upset or confused or turned off. I just found it enjoyable to listen to the variety of opinions on the matter throughout the day.

Wondering what were the hectic happenings of this week? My rail and sail deal tickets had not come yet for my ferry from Scotland to Ireland (for spring break). I have my ferry e-ticket, but the problem was that I did not have my rail tickets from Glasgow Prestwick Airport to Stranraer Harbour, where my ferry departs for Belfast. So I had to call Stena Line and ask them what to do. I am leaving Friday after all, and won’t be back in York till mid-April. In the process of calling Stena, being put on hold, and talking to the agent, I used up the rest of my minutes on my pay-as-you-go phone. The phone hung up in mid-conversation! Ah! Fortunately, the agent called me back (for which I am not charged) and was able to finish up details for sending me a new set of tickets by special delivery. Still, I needed more minutes on my phone before spring break, so I hurriedly went to the Londis to top-up. It’s these unforeseen things that take up all my time. I stayed up till 2 AM trying to finish all the homework I failed to do because I was making stupid phone calls. (Just to note, I think my tickets came today–Wednesday, but more on that after I quick mention what happened Tuesday…)

In Tuesday’s British Culture class, we had Prof. Ken Bratt from Calvin visiting. He’s the director for the Semester in Britain for 2011, which will have a Classics focus. (The Semester in Britain program rotates from department to department year after year. For example, last year’s Semester in Britain was History-based, and the year before that, Philosophy-based.) My presentation for our Sciences group was on Britain’s involvement in the development of the atomic bomb. I talked about the German-British and Austrian-British scientists Otto Frisch and Rudolf Peierls, who made an important discovery about the critical mass, the minimum amount of fissile material needed to maintain a nuclear chain reaction. Their work at the University of Birmingham had big implications for the atomic bomb projects that were going on in the U.K. and the U.S. during World War II. Eventually they joined the Manhattan Project in Los Alamos, New Mexico and were directly involved in building the first nuclear bomb. Sometimes I think the amount of stress and homework I’ve had this March has reached a critical mass and is ready to explode–into spring break that is! My reading of Middlemarch exploded as I near the end of the book. I stayed up till 2:30 AM reading. I couldn’t help it. The ending was so good. I had my doubts when I was in the thick of this thick book, but Eliot wrote one of the sweetest endings to a book I’ve ever read. (Dean, many props to you for picking a good book. I now know why you like George Eliot so much.)

A Parcel is Waiting for You

I must backtrack a bit to explain that Tuesday afternoon I got a slip in my mailbox saying “a parcel for you is awaiting collection at domestic office.” I was elated. I knew this would either be my rail tickets for Scotland or a package from home. The stupid thing is, the Domestic Office of the Grange closes at 2:30 PM, and it was already past that time, so I had to wait till 8:30 AM to get my package! Argh!

I woke up bleary-eyed and very tired, but forced myself to stay up. Two nights in a row of staying up past 2 AM was not good for me. But I went to get my package in the Domestic Office! It was a package from my mom, dad, sister, and brother! YAY! It made my day, week, even semester, for that matter. I was so happy. I did know it was coming, but I was glad it came before I leave for 3 weeks. This care package was (and is) kind of a boost to me as I am about halfway through this semester and about to embark on great adventures on the Continent (and Ireland). Inevitably, it made me quite homesick, too, but I can’t go back now. I have many more things to look forward to yet this semester! It has been the best and worst time of my life in many ways. When I say worst, it’s not like anything horrible has happened to me, but being away from home this long is hard no matter how many cool things you do. That’s just the truth. …

Castle Howard time now. After the excitement of my morning, the effects of not going to bed on a timely manner started to kick in, so I had a bad headache most of my time at Castle Howard, but I still enjoyed it immensely. Castle Howard is not really a castle, it’s more like a palace. It is home to the noble Howard family, who still live in the house (just the East Wing these days), and have lived there for over 300 years. You may recognize the name “Howard.” They are relatives of both Anne Boleyn and Catherine Howard, wives of King Henry VIII. You can imagine, the Howards didn’t have very rosy relations with the king after he executed Anne and Catherine. 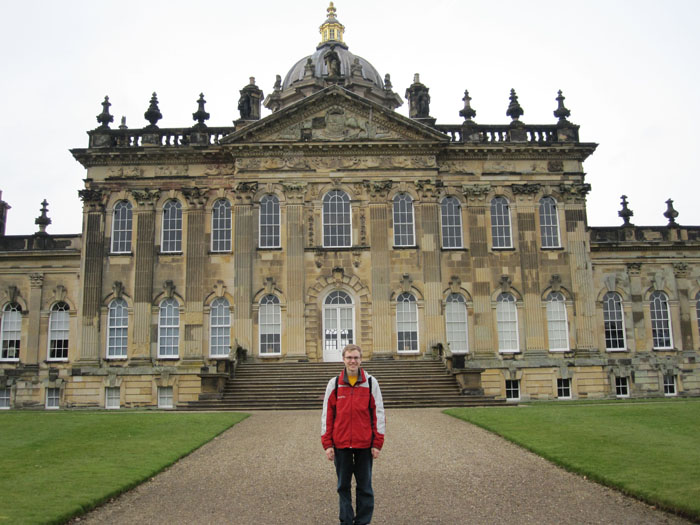 Me at Castle Howard

The grounds of Castle Howard were large and expansive, filled with gardens and great lawns. Not many flowers were in bloom, but the daffodils, crocuses, and other early spring flowers were starting to open. Peacocks roamed the grounds and made strange mournful (mating?) calls from the woods. Along one particular walk a great patch of daffodils made the hill look like yellow polka dots. 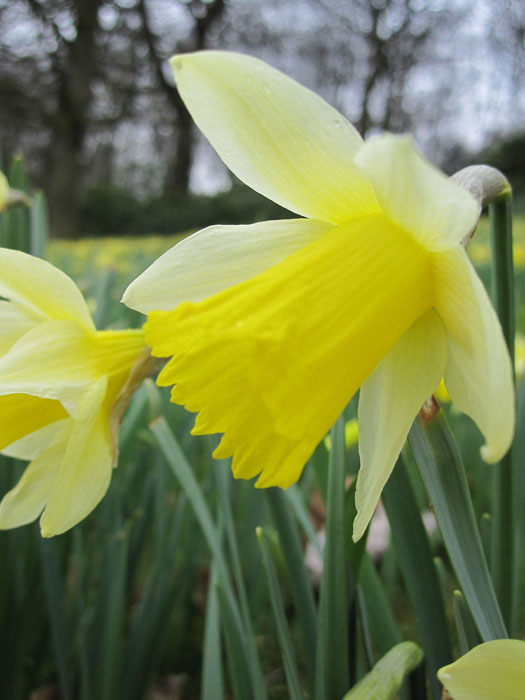 The daffodils are in bloom 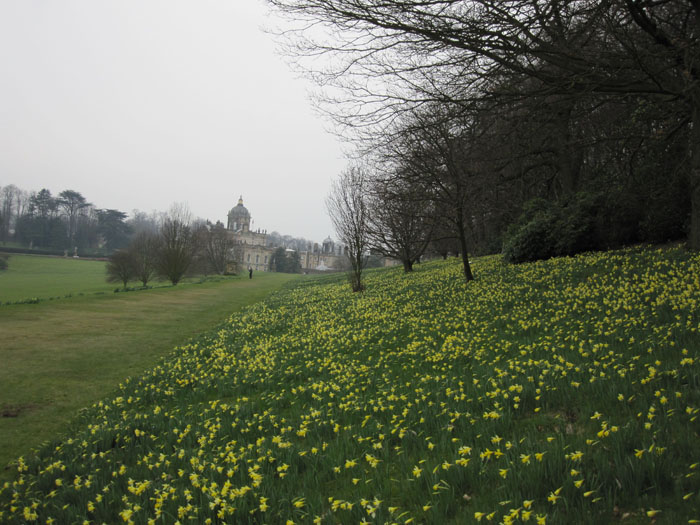 A carpet of yellow daffodils on the grounds of Castle Howard

A small building overlooked the vast landscape at the east end of the property, called the Temple of the Four Winds. It was one of the many pieces of architecture on the grounds that was built in the classical tradition. Statues peppered the landscape like white beacons in the spacious gardens. Ray Wood, a small forest, was even incorporated into the property. 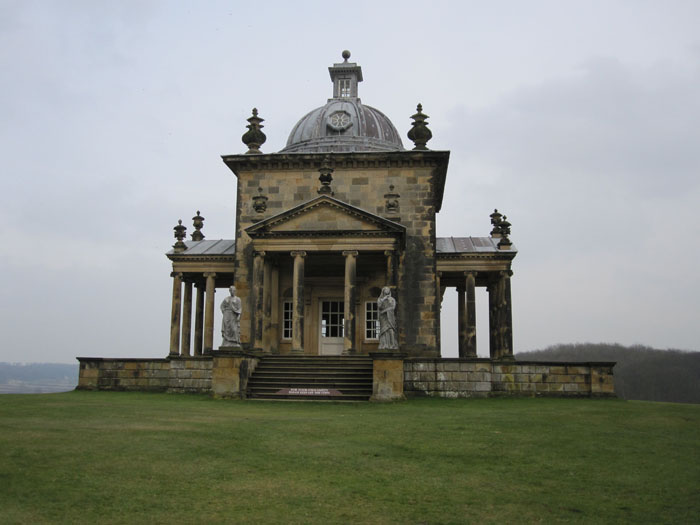 Temple of the Four Winds at Castle Howard 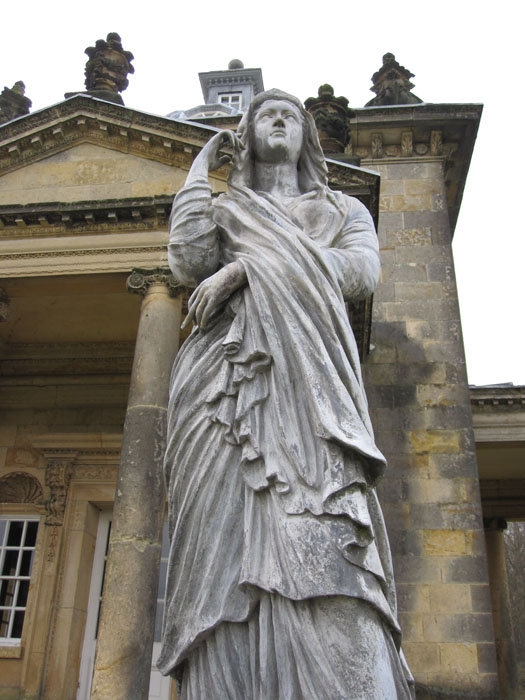 Statue at the Temple of the Four Winds, Castle Howard 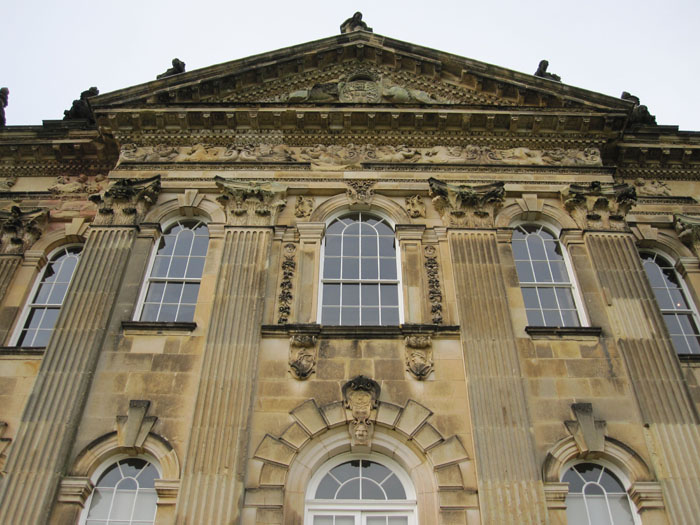 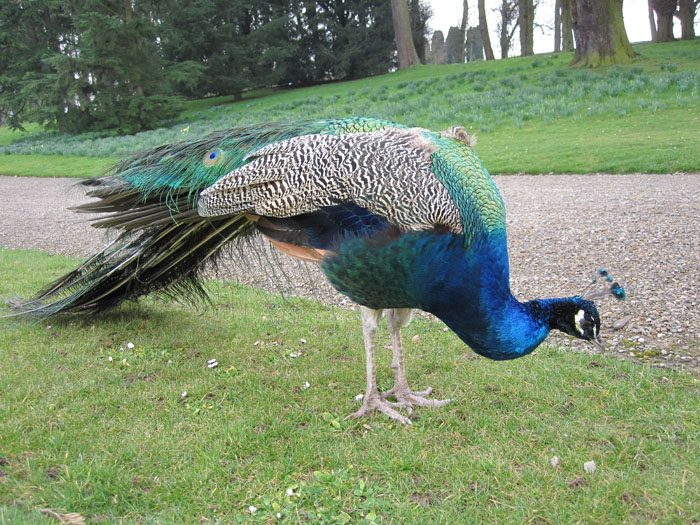 Peacocks peck away on the mansion grounds

Castle Howard has twice been used as a movie set, both for the adaptation of Evelyn Waugh’s novel Brideshead Revisited. The first was in the 1980s for a TV miniseries of the book. The second was in 2008 for a feature film starring Emma Thompson and Michael Gambon. You can watch the trailer for the 2008 movie Bridshead Revisited on IMDb. Almost all of the inside and outside shots in this trailer show parts of Castle Howard. 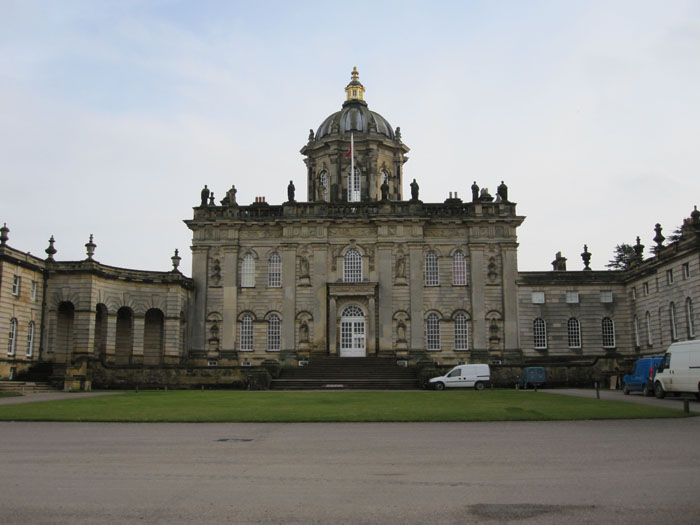 Front facade of Castle Howard–can’t you just imagine fancy carriages driving up to the font?

The interior of Castle Howard is magnificent, a mini-Versailles of sorts. Many great pieces of artwork, originals and copies of the greats, portraits of the family, chandeliers, marble busts, and trinkets and heirlooms of the prestigious Howard family from many years. The exhibit/museum portion of the house in the west wing is still occasionally used. The family closes it off when they have visitors and people actually still sleep in their ornate bedrooms and use the grand ball rooms and hallways. The house even has its own chapel. The dome on the top of the house is enormous (for a residence) and is painted with great frescoes. It wasn’t gaudy or garish like some homes of the wealthy, but done with great taste. The family even had recent photos of their kids and portraits of the Hon. Simon Howard, the current occupant of the house with his wife and kids, Merlin and Octavia. 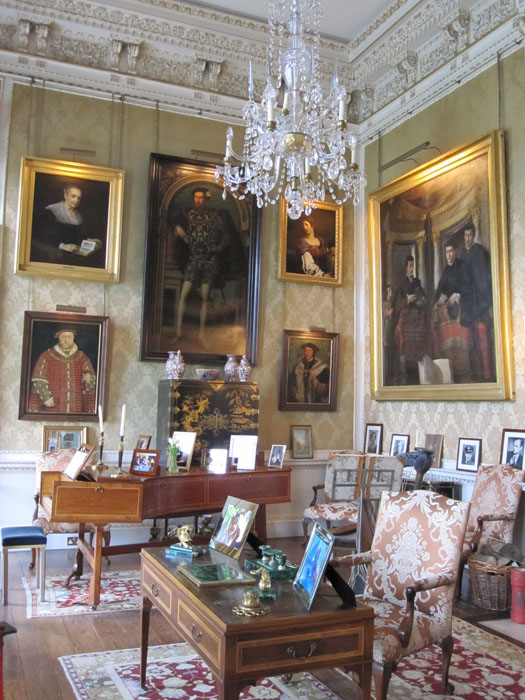 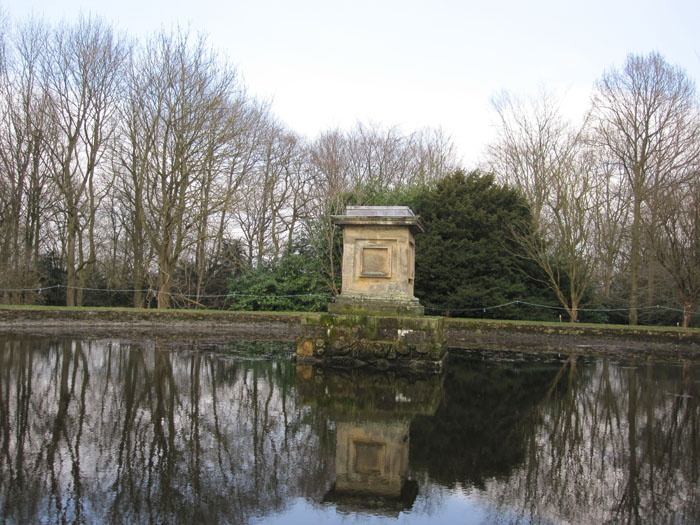 I think Castle Howard would be a spectacular place to visit again later in the spring or summer, when, for instance, the Rose Garden, is in full bloom. It had the potential to be a botanist’s heaven. I walked around in the Rose Garden, and even it its winter/early spring barrenness, it was easy to get lost–it felt a bit like Alice in Wonderland. But it was also easy to see how beautiful it would be in the summer. The visit to Castle Howard was the epitome of that vision of high society England that I had before coming, but it is a whole different experience actually being in the gardens and walking the halls of a beautiful home yourself instead of just imagining it. I think I even spotted (and say hi to) one of the members of the Howard family who was walking his dog on the lawn as I came down from the Polar Bear Walk (don’t ask me why it was called that). Probably the closest to royalty I’ll see in England. At least I’d like to think so. 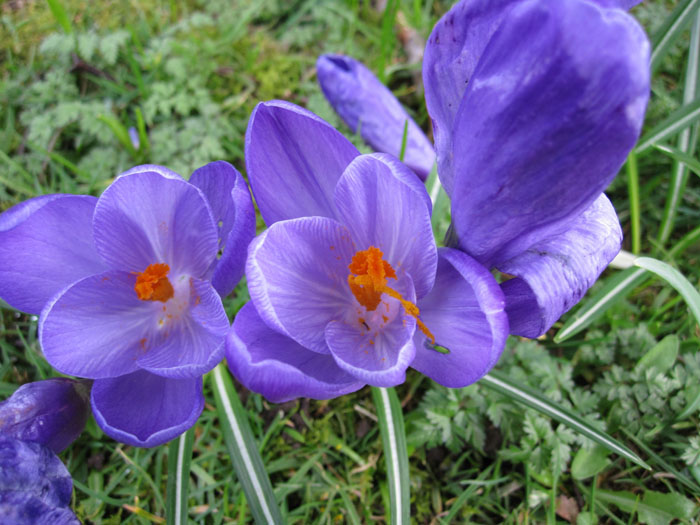 Spring is under way – the crocuses are in bloom!

Now it’s going to be a hectic few days as I make final preparations for the spring break of a lifetime. Pray for my heart to remain calm and enjoy it, and hopefully not too many troubles will arise. Wish me godspeed!