Spring Break: Dublin to Galway, The Burren, & The Cliffs of Moher, Republic of Ireland

From Newgrange, I boarded the bus back to Drogheda. At noon, I headed out from there to Dublin. It turns out I needed two extra euros to get to the Dublin Busaras (main station), but the driver let me get away with 83 cents. I had accidentally bought a ticket to get me to the Dublin airport, not the Busaras. The ride was about 1.5 hours.

Dublin was a hopping city. Clean, big, and busy. I thought it was quite cool. I had not heard very many good things about it, but I found it to be quite pretty. I texted Erin and said I’d meet her at Trinity College. I asked a man outside a bank for directions to Trinity. Even though it was a Dublin landmark, I didn’t have a clear map of the city. 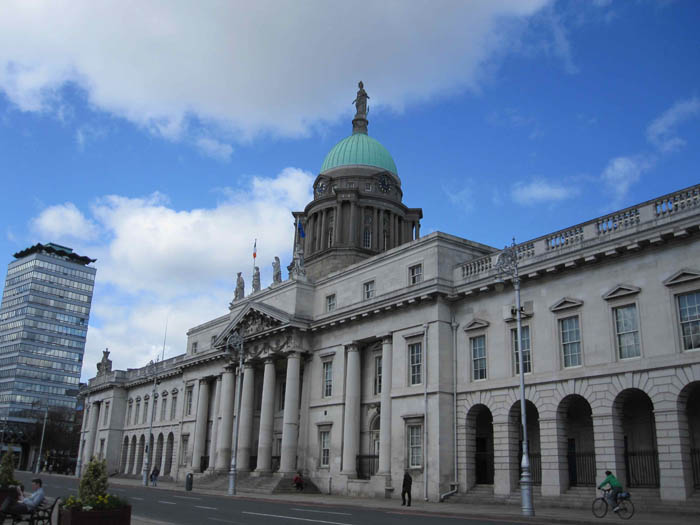 Soon enough, I found Erin, Melissa A., and Jennifer K. waiting outside the gates of Trinity. It was such a strange and wonderful feeling to see them, especially after being alone for a while, and before that, with my Italy group. We talked a bit, but couldn’t linger too long. Jennifer and Melissa had to catch their flight back to England. Unfortunately, I did not get to roam the campus of Trinity. Instead, Erin and I helped the other two with their luggage, and saw them off on the bus to the airport.

We couldn’t roam around much longer ourselves, for we had to catch the 4-hour bus to Galway. We ended up taking the 16:00 bus to the western side of Ireland so we’d get there shortly before nightfall.

In Galway, we stayed at the Snoozles Hostel. Since it was dark outside when we got to Galway, we didn’t spend too much time roaming around. Instead, we popped into a Quizno’s for dinner. It felts sort of like giving in (to fast food chain restaurant food), but we were hungry. Back at the hotel desk, we discovered that we could get to the Burren and the Cliffs of Moher for much cheaper than we had been anticipating. Tours were going for 20 euros. The tour would include a lot more than just a stop at the Cliffs, which would cost about 14 euros by bus. We didn’t mind paying the extra 6 euros to see a bit more. Erin and I were in separate rooms the first night because the hostel was quite full, and they couldn’t place us together. I was in a room with 4 or 5 Brazilian women. That was interesting to say the least. The bathroom was grimy and very wet. The shower did not have a graded drain, so the water went all over the bathroom floor. I slept fairly well though. Traveling this much was making me tired. 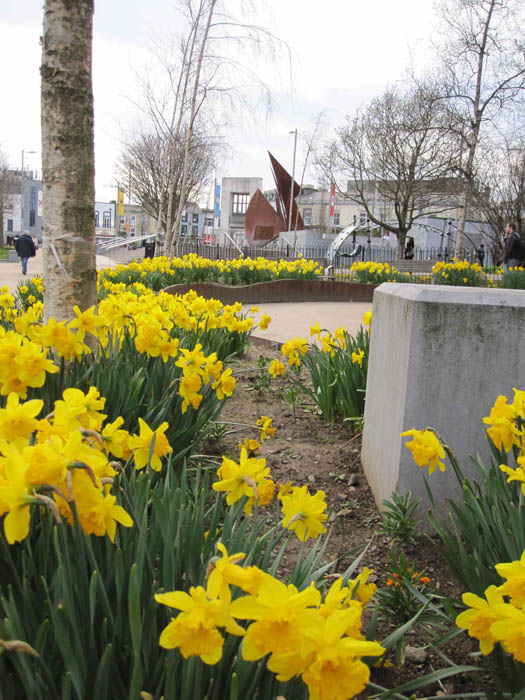 The breakfast at Snoozles sucked. It was just toast and jam. A big disappointment after my glorious breakfast at Newgrange. Erin and I both got up fairly early so we could board the tour bus. Our drive was a sweet, old man named Desmond Murray. He was hilarious. A local, he knew a wealth of information about the Burren and the Cliffs of Moher. He took us past several castles, and we stopped at one: Dungaire Castle. There, I spoke with an elderly Irish woman who said she loved touring her own country, but that she also love Americans very much. When I told her I was from Michigan, she said one of her sons had attended the University of Michigan back in the day. If I may generalize, Irish people were some of the most friendly people I’ve ever met. First the old man on the bus to Donore, then Desmond Murray, and now this lady. She suggested that Erin and I visit Kinsale, when I told her that we were off to Cork next. We ended up taking her advice (but more on that later in my Kinsale post). 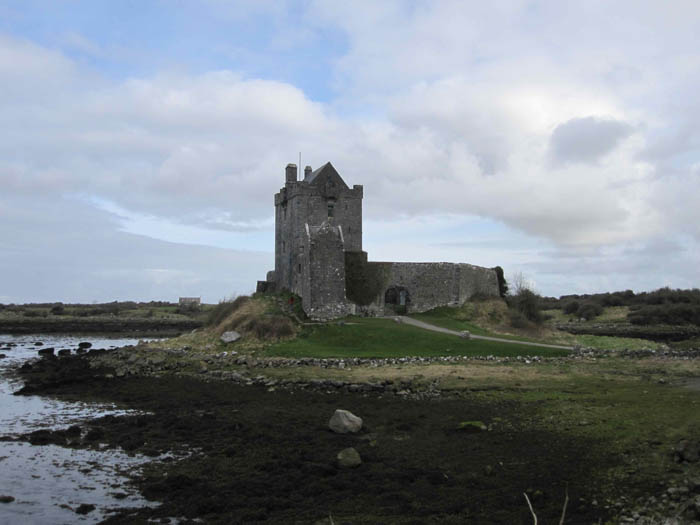 Desmond showed us the Ballyalban Fairy Fort. It was a circular mound of mysterious origins, ringed by trees and shrubbery. Desmond would run up behind girls on the tour, including Erin, and act like a leprechaun or fairy climbing up their pant leg. Hilarious. A carved, wooden leprechaun was even placed in a hollow of a tree. I wonder if Desmond put it there. 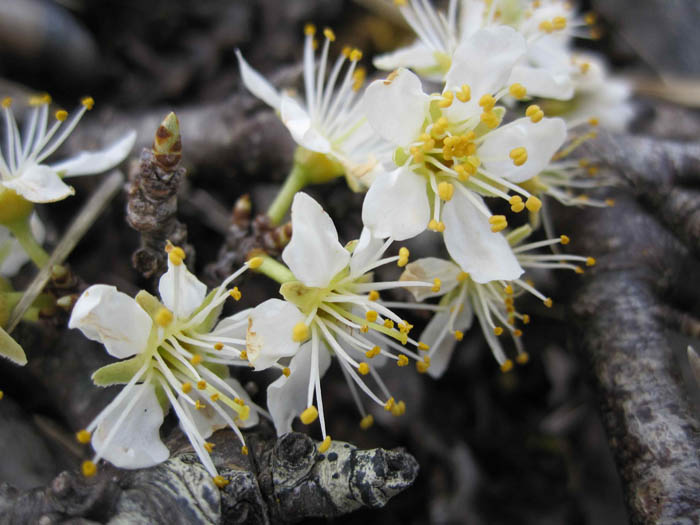 Next, Desmond took us to the top of the Burren, a barren limestone landscape. You know how I was raving about all the green in Ireland in my last post? Well, this part of Ireland was definitely not green. I looked it up later, and this type of landscape is called karst. We stopped at one particular site, the Poulnabrone Dolmen. The Dolmen is one of several portal chamber tombs all throughout the Burren. The limestone cairns and rockpiles were unlike anything I’ve ever seen before, with their cracks and mini-canyons–a grey pallette, smoothed out from thousands of years of erosion. The flora were small and delicate and often thorny. 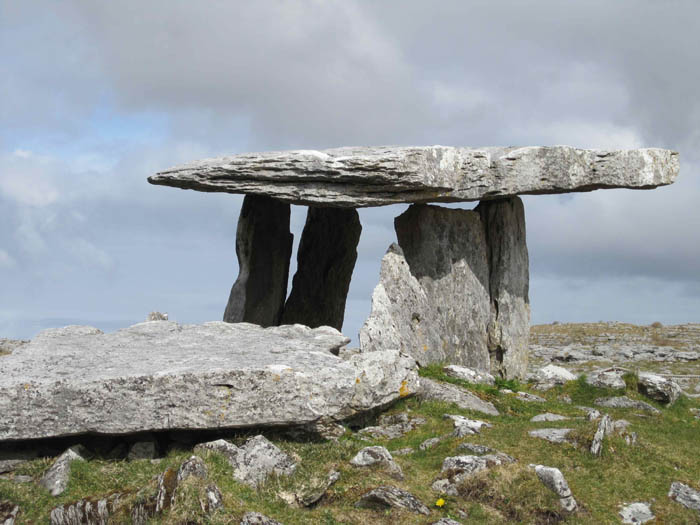 We explored a graveyard at Kilfenora, a site full of traditional Celtic crosses, and we passed the Matchmaker Bar in Lisdoonvarna. (That’s a topic you can Google.) Desmond took us to his favorite pub in Doolin for lunch, called Gus O’Connor’s. Erin and I had the vegetable soup and brown bread. We shared a basket of chips (reminder: I mean fries when I say chips). 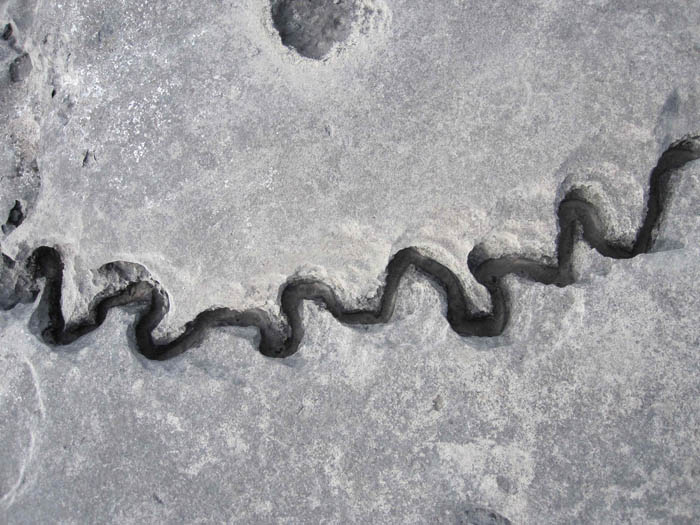 Mini-canyons in the karst landscape of the Burren 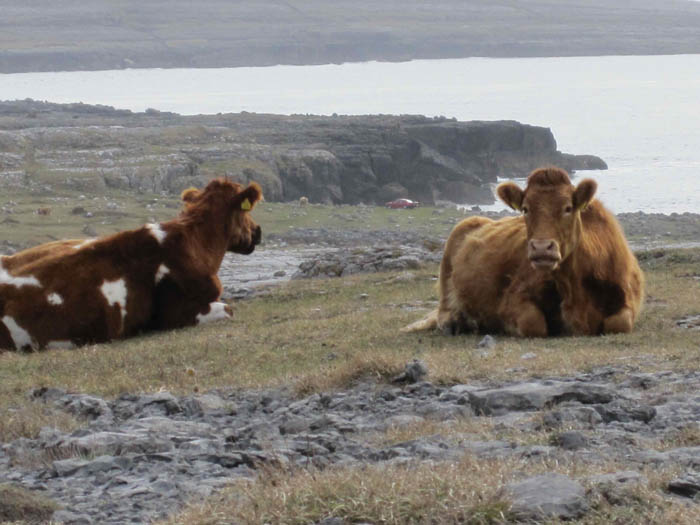 Free range cattle in the Burren

The Cliffs of Moher

The Cliffs of Moher were not far from Doolin. It was actually amazing to see them come in view as the bus made its way closer and closer to the edge. The visitor center is built right onto the cliff, so it blends well into the natural environment. And we couldn’t have asked for better weather. The weather had been a bit grey in the morning. While we didn’t exactly get a blue sky, the temperatures were wonderful. We had stunning views down the 270-meter cliffs (nearly 900 feet), and a splendid sight of the Aran Islands: Inishmore, Inishmaan, and Inisheer. 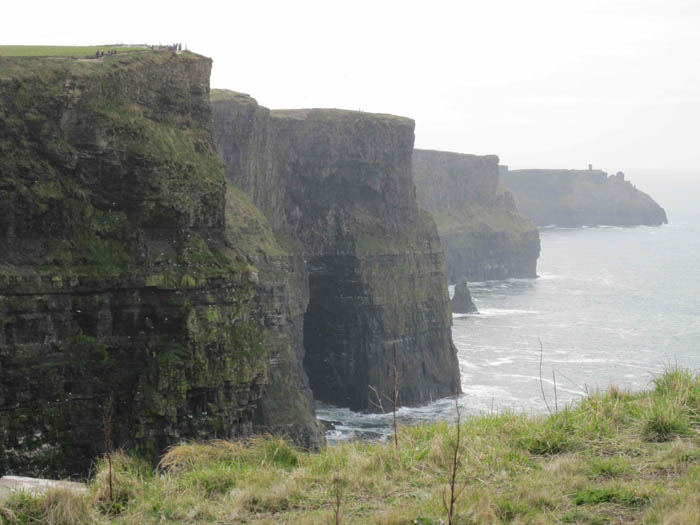 The Cliffs of Moher, looking toward Hag’s Head

I loved it all, even though I have a slight fear of heights. (Well, maybe not so slight, my brother and sister would tell you, after my experience at the Grand Canyon of the Yellowstone in 2009.) A sign warned not to go past the barrier, but Erin and I did, like most people who were there. Desmond joked that he was not responsible if anything happened to us on the Cliffs. It was funny, but deaths really do happen at the Cliffs, and the signage shows stick figure men falling off with crumbling debris falling after. 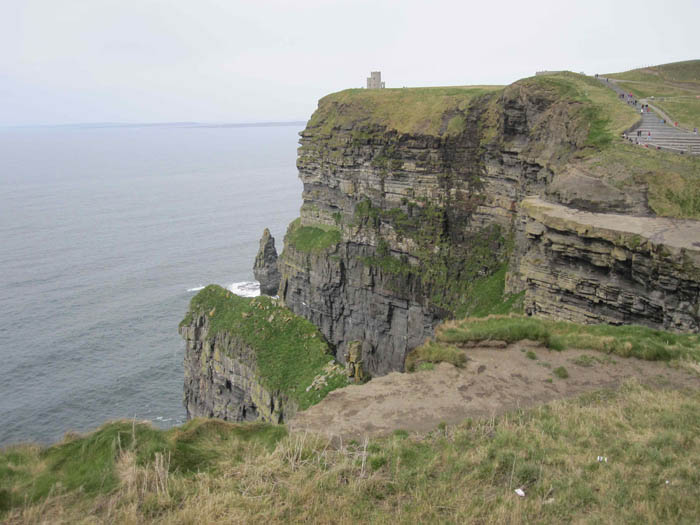 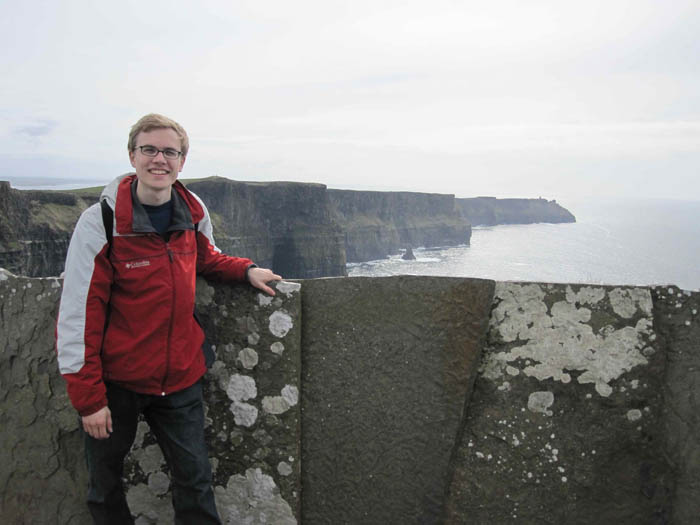 We didn’t walk down to Hag’s Head, the southern end of the Cliffs, for time’s sake, but we did hang around O’Brien’s Tower for a while, taking in the views. No matter how many pictures I took, none of them captured the beauty of the Cliffs. (I feel like I have to say that for a lot of my semesters’ photos.) It was hard to leave after our allotted time at the Cliffs. 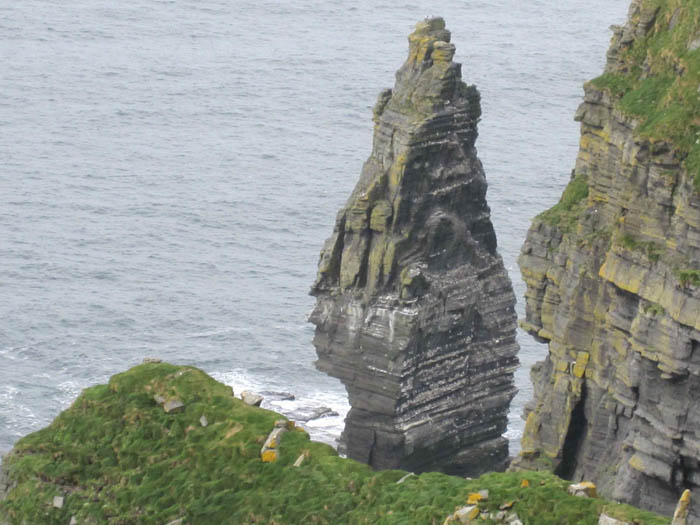 Don’t you think this rock looks like a lady’s face?

Desmond expertly drove us back into Galway. He played a video of and Irish céilidh (pronounced like kee-lee), othe bus television screens, which featured Irish folk music and dancing. He had it on repeated, so it got kind of annoying, but it was hard not to love Desmond.

Back in Galway, Erin and I decided to meander down Shop Street. We gave into chain food again: McDonald’s. But Galway didn’t have a lot of good pubs open. It was a nice city, but it seemed like a lot of places were closed past 5 or weren’t worth the money. Granted, we didn’t have a ton of time to explore better options.

I had a minor ordeal with the hostel moving my backpack out of my room when we returned. Apparently a new group of girls had moved into my room after the Brazilians had left. So they moved my bag to the front desk. I moved it back up to the room, but the girls brought it back down later. In the process, the hostel staff accidentally threw my towel into the bedding laundry. I guess I couldn’t complain about that part–free laundry!–but it gave me a minor panic attack when I did not find my bag in my room. Luckily, the receptionist was a nice Finnish woman, about our age. Erin and I ended up have a very nice conversation with her for the rest of the night, talking about such matters as the difference between the U.S. customary system of measurements and the metric system. She was an intern studying tourism. I had never heard of a position like that before, maybe because those kind of jobs are so obvious that they’re easy to forget about. Duh, William.

For all the trouble I went through with the girls moving my bag in and out of my hostel room, the Finnish woman moved me into the same room as Erin. It was a bigger room and much nicer. Ironically, I did not sleep as well because someone grabbed my foot in the middle of the night! We still have no clue how 2-3 strangers got into the key-card-access room in the middle of the night (about 1-2 AM), and thought they could just start sleeping on top of me. Luckily, the one who grabbed my foot was scared away and I slept more peacefully the rest of the night. Who knew that wouldn’t be my worst hostel experience yet?