I slept surprisingly OK for having my foot grabbed in the middle of the night at the Snoozles Hostel in Galway. After the laundry staff returned my towel and washcloth, Erin and I had breakfast. Before boarding our coach to Cork, we stopped in a Centra to buy food for our lunch. I bought 2 loaves of bread, 2 clementines, and a bag of Taytos crisps. Our bus to Cork left at 10 AM. The ride was long, but I spent the hours catching up on my journal and listening to Enya. Listening to Enya in Ireland? I know. Sweet.

We arrived in Cork city, and our hostel–above the Bru Bar–was a short walk across the River Lee. Cork is actually a pretty sizable city–and busy. I say “actually” because I didn’t expect it to be as big as it was/is. Our room was 3 floors above the pub level. We found a map, and discovered that the city center of Cork is on an island of sorts, in the middle of the river. 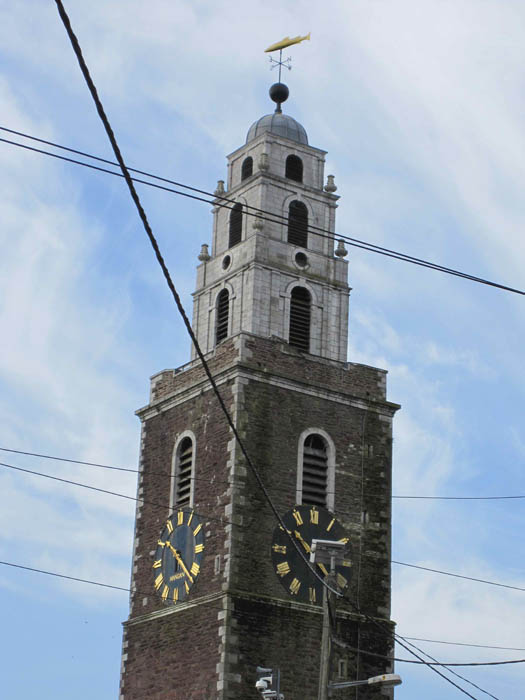 The tower of St Anne’s Church, in Shandon, Cork — notice the fish weathervane at the top

Our friend Melissa had told us about a really good fish and chips place called Lennox’s. We walked all around the city trying to find it. It’s tucked away in a residential area on Barrack Street. When I heard good fish and chips, I didn’t expect that to also mean LOTS and LOTS of fish and chips. Lennox’s serves absolutely ginormous pieces of fish and so many chips, if you eat them all in one sitting, your face will go blue. Don’t get me wrong. It was delicious, but almost too much. Erin and I should have split one order instead of getting individual pieces. 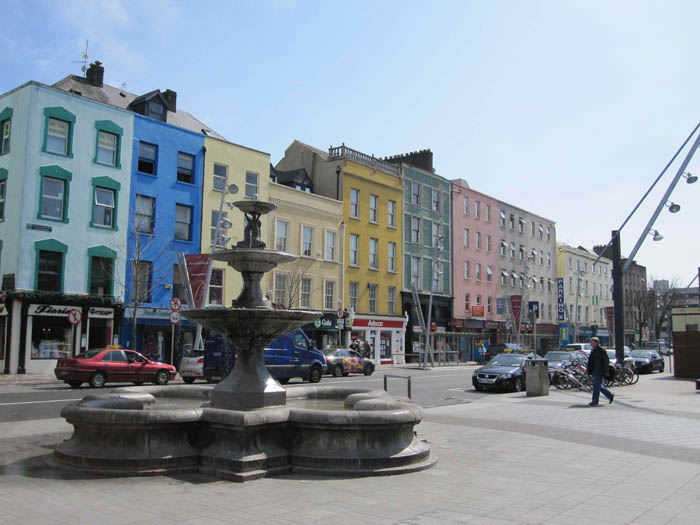 Colorful buildings on the Grand Parade in Cork

We sat in an old park–which appeared to be a former abbey or church grounds–people watching and digesting. Since we had already arrived late in the afternoon, it was getting late. But we didn’t bother to have dinner. We returned to the hostel and decided that the next day we would explore Cork’s historic points of interest, and the following day take a day trip to Kinsale for Erin’s birthday. That night, I wrote in my journal, “I think I need a vacation from vacation.” Living in hostels was getting a bit old. Such a paradox: I was having the time of my life, but getting sick of it at the same time.

I’m going to be honest about Cork. It is big. It is grimy. It has a few historic points of interest. But it’s nothing spectacular. Though, keep in mind that I was sort of vacationed out and hostel weary. But we decided to make the most of it. We took the self-guided “Cork Walk.” A brochure laid out a nice path through the city that would take us past buildings and landmarks. The map wasn’t always clear, and it didn’t spread very far beyond the city center, so we got lost a few times, but at least information signs were posted here and there to get us back on track.

Cork has a few interesting churches, including St Anne’s Church in the Shandon neighborhood of the city. Visitors can ring the bells of St Anne’s themselves at any time of the day the church is open. Erin and I did not, because I think there was a fee. I learned, to my amusement, that Cork was known for butter and shipping. They even had a Butter Museum. Didn’t seem worth the euros to visit, especially when living on a small budget. I don’t know if this is true, but it’s supposedly the second largest port city int he world after Sydney, Australia? Can someone confirm or deny that?

One of the most interesting stops of our self-guided tour was the Vision Center, an old church that has been converted into a local art and history gallery. Inside a vast miniature 3D model of the city was laid out on a table. Local schoolchildren had made drawings and written reports on their great city. It was neat to see the city and its pride through the perspective of the children. It is known as the Rebel City. The fighting Irish, so to speak.

We strolled to the western end of the city and discovered a modern art gallery on the campus of the University of Cork, the Lewis Glucksman Gallery.  The campus was actually quite beautiful.

We returned to the city’s shopping district. A lot of the streets’ names end in “quay,” echoing the city’s status as a seaport. Patrick Street is a main thoroughfare. We all know how important St Patrick is to the Irish. We also spent quite a bit of time wandering through the English Market. (The Irish spend all this time fighting off the English, and they name a market after them? Ha.) I actually don’t know the history of the name, but I know the market’s been around since the 1700s for sure. Pretty well established. Erin found a black, stray dog (we think it was a stray) in the Market. He looked a bit lonely. Maybe he liked roaming the market because of all the people, or, he wished he could snatch some fresh meat off the ice trays. 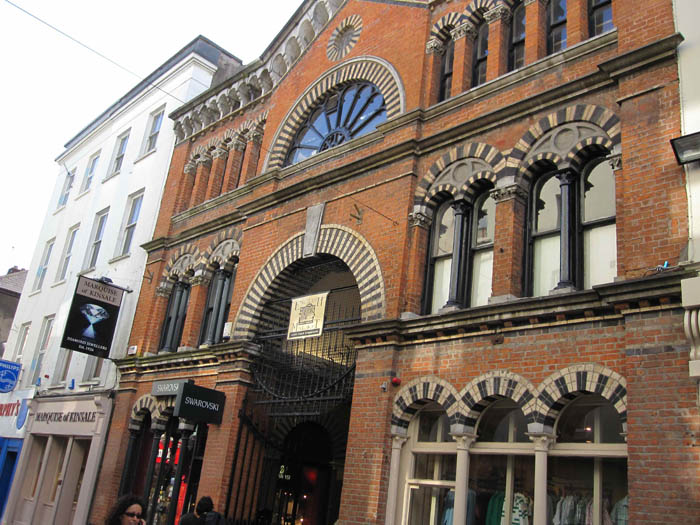 To save money, we bought mini pizzas at Tesco’s and cooked them in the hostel oven for dinner. We read in a brochure about the Craichouse comedy club. Craic is an untranslatable Irish Gaelic word that means something like “good times” or “sociable” or “fun”–that’s it, it’s untranslatable, but it’s very Irish. It was nearby, so we decided to head there for a night of Irish humor. I had a pint of Bullmer’s cider and we listened to a string of 5 Irish and 1 American stand-up comedians make jokes. Let’s just say, some of the jokes were funny, some I could not understand because of lcoal/national references or accents, and some were just plain raunchy. I think the jokes got more crude and sexual near the end. It was definitely an experience I’ll never forget.

We got back late, and the other guests in our hostel room were already asleep, so we climbed into bed as silently as possible.