Cork to Amsterdam to Alkmaar

My phone alarm went off at 2:30 AM. I woke up extra early this morning because I wanted to make sure I got to the Cork City Airport before my 6 AM flight. I tapped Erin awake to whisper goodbye, and slipped out of the hostel as silently as possible. I had the front desk call for a taxi. He thought I was a bit crazy for leaving this early, and maybe I was, but sure as hell was not going to miss my flight to the Netherlands, even if that meant sacrificing sleep. But the taxi driver was nice. He shaved a euro or two off my cab fare. (Yet another example of an Irish person being nicer to me than they had to be. I am really impressed by Irish folk and their kindness.)

When I arrived at the Cork City Airport, not a soul was in sight, except for what I can only call the “zamboni” driver, who was polishing all the empty floors. I found a place to sit and catch up on my journal in the food court by a Subway restaurant. Then a group of Irish Garda (Irish police, or “guardians”), showed up. It must’ve been “lunchtime” for the night shift, because they all ordered Subway sandwiches and sat a few tables away from me. I’m glad the Garda showed up because the empty airport was starting to give me the creeps. … I had left too early… whatever, there was no going back now. I was too awake to go back to sleep, and I didn’t even want to try, or I’d might stay asleep past my flight time.

Closer to boarding time, my stomach began to rumble. I figured I ought to have some sort of breakfast, because I didn’t plan to buy any food on the plane. RyanAir and AerLingus offer cheap flights, but only if you avoid buying anything in-flight. This flight was AerLingus.

My flight arrived at Schiphol precisely on time. Customs was very quick. I made my way through Schiphol’s long corridors and into a vast arrival hall with lots of people. How was I to spot my uncle and aunt in the crowd? I texted Tante Tannie to ask their locatin. Aankomsthal 2. Arrival Gate 2. I saw them from behind. I had not seen them in person for 7 years, so it was a bit different to see them again, as I am sure it was for me.

We departed the airport and got directly on a train to Alkmaar. We sat in business class. My uncle was just about to retire from working for the Dutch railways, so he had some good tickets left. I tried speaking Dutch with again. It came back slowly, just in small words and phrases with a rare sentence. But they seemed to understand what I said, even if I got the syntax wrong. It helped that they know English pretty well–better than I know Dutch–to fill in the gaps.

Tante Tannie took my laundry and immediately put it in the wash. That needed to be done badly. They were surprised I had been traveling with very little–just my backpack. They served me Chocomel, apple tart, and pumpkin bread with cheese. Lekker! After a bit of conversatie, I took a much needed nap in their guest bedroom. When I woke up, I had tea and eierkoekje. They were really treating me well. Such a difference from some of the hostels. But that’s the advantage of having family when you travel. They agreed to take me to Amsterdam tomorrow.

My cousin Magiel, their son, came over for dinner, so I got to see him, too. We had salad, peas, and a hamburger-like patty. Tante Tannie told me their Dutch names, but I already forgot what they were. Much of dinner, I sat back and listened to my uncle, aunt, and cousin speak, trying to discern what they were saying in Dutch. Good practice.

We watched the news–Journaal–after dinner, and snacked on peanuts with colas. At 11 PM, I got to use their new computer to Skype with my family and respond to emails. It was the first time I got to see my family in 2 weeks. Tante Tannie and Oom Piet joined in for part of the conversation. I went to bed at 12:30 AM to get a good night’s rest before our day in Amsterdam.

A short walk from Amsterdam Centraal station, and we hopped on a canal, or grachten, boat ride. The grachtenhuizen, or canal houses, that characterize Amsterdam lined every water way went down. We admired the famous gabled roofs, brick patterns, doorways and windows, and varying sizes. Some comically small, others grandiose and luxurious. We rode by fancy hotels, politicians’ homes, including the mayor of Amsterdam’s, and other gorgeous architecture. The canals were full of house boats (and litter, unfortunately, in some places), but the water level remained the same throughout the canal network. This is because Amsterdam is under sea level, and uses a powerful water regulation system that keeps the sea water out, and the water levels neutral inland. I took lots of photos on the canal ride, listening to the audio track repeat the tour in English, Dutch, and German, and sneaking a few licorice dropjes. 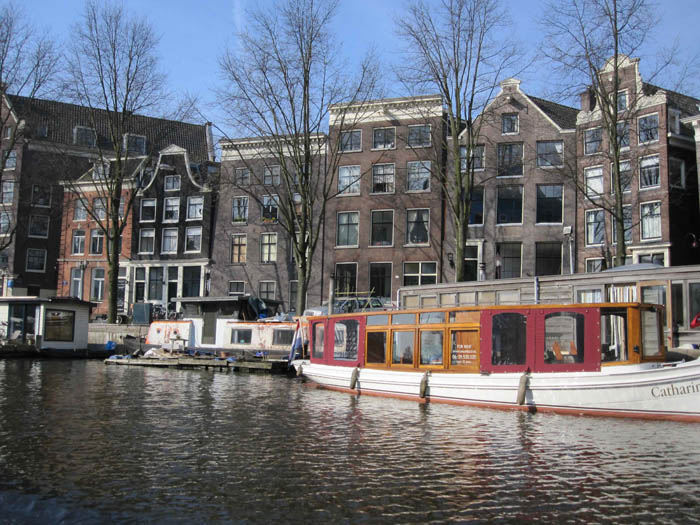 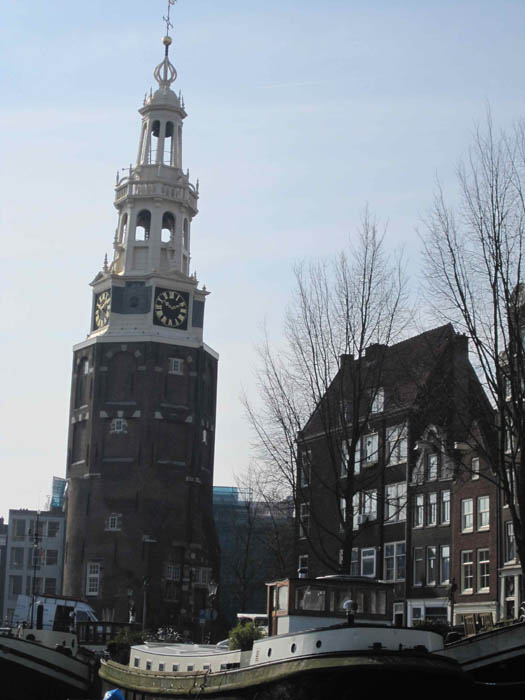 The weather was glorious. I had been lucking out my whole spring break. I had heard of fellow Yorkies stuck in rain storms or cancelling plans because of bad weather. I had had it drizzle a bit in Drogheda, Ireland, and a downpour at Newgrange, Ireland, but that was after I had done my activities for the day. It’s almost like I was carrying the good weather with me. 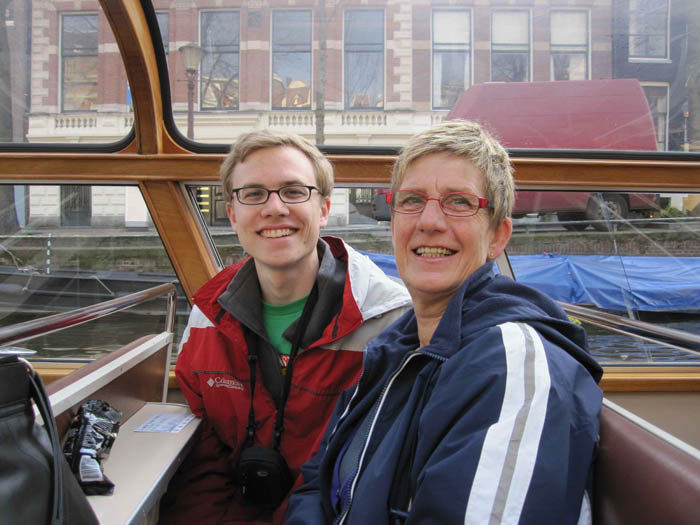 My Tante Tannie and I on the canal boat ride 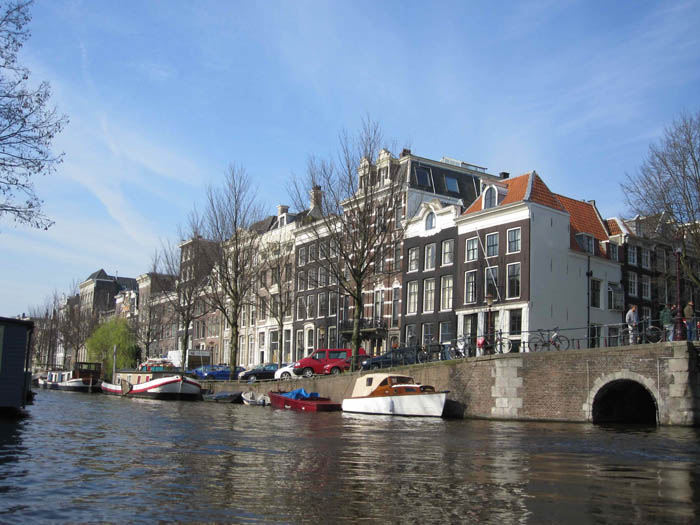 Prinsengracht, Herengracht, or Keizersgracht – I forget which one of those three this is 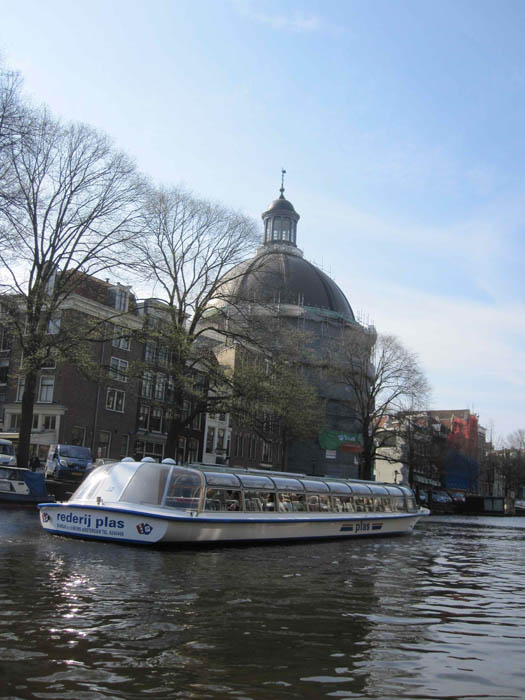 After the canal boat ride, it was time for a cup of hot chocolate met slaagroom (whipped cream). We found a found a cafe, and watched passersby and the construction/destruction of the Amsterdam streets. Amsterdam was installing a whole new underground rail system, much like London’s Tube, apparently. We strolled through Waterlooplein’s fleamarket and past the Bevrijdingsdag/Herdenkingsdag monument. We soon found the hidden Begijnhof and the English Kerk (Church), before settling on Rembrantsplein for lunch. I had a club sandwich that had an oozing over-easy egg on top. Good but messy. 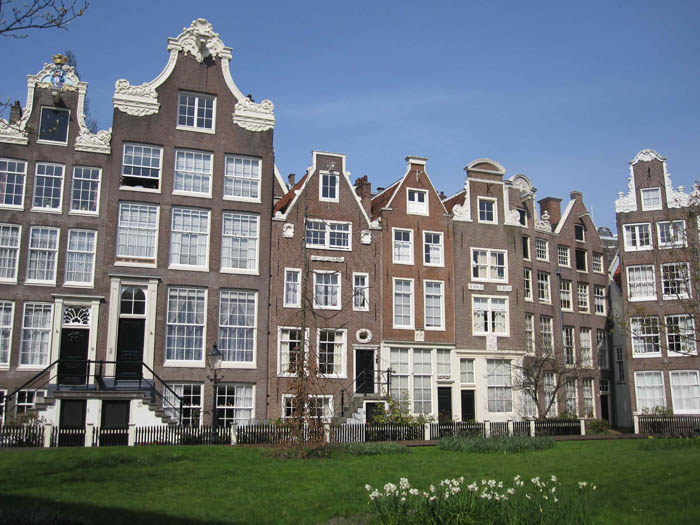 The van Gogh Museum was “heel mooi“–very nice. I saw many famous van Gogh’s up close, such as Zonnebloemetjes (“Sunflowers”) and Zelfportret (“Self Portrait”) which was exciting. The permanent gallery upstairs was unfortunately closed due to renovations. … A lot of things were being renovated in Amsterdam. The entire Rijksmuseum was wrapped up like a present in scaffolding. … But it was still awesome to be in Amsterdam’s Museumplein. GEZELLIG, actually. Gezelling is like the Irish craic. It’s an untranslatable word. It means something like “good times” or “sociable” or “cozay” or “fun”, et cetera, et cetera. Tante Tannie and Oom Piet said the most memorable line of my week in the Netherlands: “De thema van de week is gezellig!” or “The theme of the week is gezellig!” 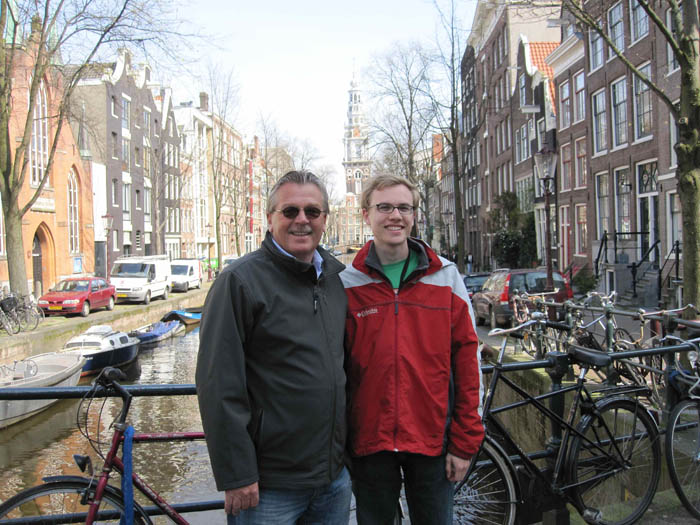 Oom Piet and I with the Zuiderkerk behind us

We had ice cream cones outside on the Museumplein next to the I AMsterdam sculpture. Mooi. We took the tram back to Amsterdam Centraal. I was vermoeiend (“getting tired”), drowsy enough to drop off a few times on the tram. Then it was 40 minutes back to Alkmaar-Noord, and a short car ride into Heerhugowaard.

For dinner, Tante Tannie served spiral macaroni with beef. “Eet smaakelijk!” we said. (Another untranslatable phrase that means something like, bon appetit! or “enjoy the food!”) Dessert was advocaat met slaagroom. Ice cream with a creamy liqueur made from eggs, sugar and brandy–and whipped cream. Mmm-mmm. The Dutch eat so well! So much good food!

Before bed, I Skyped again with home. It was so nice not to use slow hostel computers. I repacked my bag for my journey south to Zeeland the next day, and went to bed after a few glasses of Chocomel, and the remaining pieces of appeltaart. Tante Tannie and Oom Piet treated me so well. I was so blessed to be able to visit them, and thankful for what they did for me on fairly short notice. They did more than I could really ask for. But my week in the Netherlands was just beginning. Two more stops before going back to my home-away-from-home York.