Hoek van Holland to Harwich and Back to York

On the morning of April 17, I packed my backpack one last time. My 3-week long spring break was over. I was happy for all the extra time to travel, but was also happy to begin my journey back to my home-away-from home. After breakfast, my uncle and aunt would be driving me to Hoek van Holland, where I would board a Stena Line ferry back to England.

At 10 AM, we headed out the door for what would be about a 2-hour drive to Hoek van Holland. After dropping me off at the ferry, Tante Hennie and Oom Wim were going to head up to Leiderdorp to visit their son (my cousin Bas) and his girlfriend.

We arrived at the port a bit early — 12 noon precisely. My aunt had packed a small lunch and a thermos of tea. We ate our lunch out on the spoorwegen platform (railway station) that came right up to the ferry house. The sun was shining, and it was a lovely last hour in the Netherlands. Tante Hennie allowed me to pack several boterham (sandwiches), two sinaasappels (oranges), and a fles cola (bottle of pop). 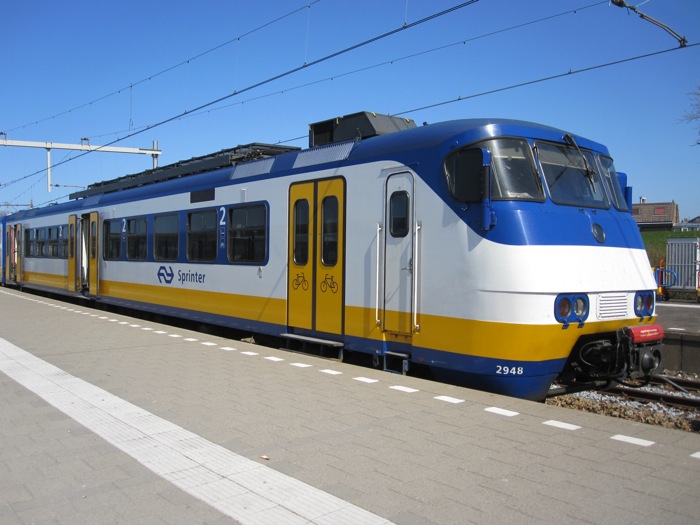 The ship ride is about 7 hours long from Hoek van Holland to Harwich, England. It’s not quite as short as the crossing from France to England at the Cliffs of Dover, but a cool way to travel — not to mention, my only mode to travel and make it back to England before Monday morning since the volcano in Iceland — Eyjafjallajökull (as I learned later it was called) — was still spewing an ash cloud all over Europe and all flights were grounded.

I boarded around 1:30 PM, going through the necessary passport controls stations, and finding a place to sit. I did not reserve a cabin, so I didn’t have much choice but to sit in the main dining area. It was a bit less comfortable than the ferry I had taken from Stranraer, Scotland, to Belfast, Northern Ireland, but, then again, it was 7 times longer of a ride.

We got into the port of Harwich just as the sun was setting: a red-orange ball creating silhouettes of church steeples and trees awaited me. Customs took a seeming eternity to get through. I had a laugh to myself, though. This was the third time I was entering the U.K. since arriving in the U.K. in January!

Finally out of customs, there was just 20 minutes to get to my late-night train into London. I was really tired at this point, but the night was not over yet. I still had to get back to Kings Cross Station for a train to Peterborough, where honestly… I did not know what I was going to do next. I had not booked a hostel or hotel. Looking back, I probably should have just stayed in London for the night, where there were plenty of hostels or nice warm pubs, but I had already booked my ticket a few months back.

I took the Tube from Stratford Station, which was under some kind of renovation (probably for the 2012 Olympics), to KGX. And KGX was under its own kind of renovations. I think the plan was to make it easier to go between KGX and St Pancras (next door), plus make KGX look more like one consistent station. It did look sort of pieced together, over time, like they had added sections ad hoc.

Another hour and a half and I was in Peterborough. Peterborough did not seem like too bad of a city, but the streets were mostly empty at this time of night, and I walked around looking for a hostel or hotel. Hostel, preferably, since I didn’t want to spend gobs of money. I looked at my tiny map of the city, and found out that most of the hostels were on the complete opposite end from the station–and if there were any nearby, I surely couldn’t find them in the dark. The closest option was a hotel called Park Inn. I briefly considered trying to sleep outside, but it was a bit chilly, I figured it was worth spending the money in order to get a good night’s rest so I wouldn’t have such a bad day returning to York in the morning.

I got a room, and flipped on the BBC. All the news was about that effing volcano. Now I was starting to get worried. It looked likely that my parents wouldn’t be able to visit me at the end of the month. 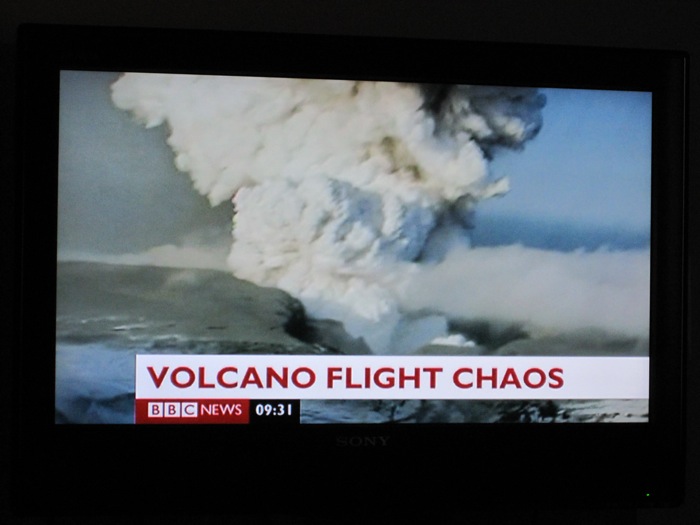 F***ing Eyjafjallajökull on the BBC in the morning 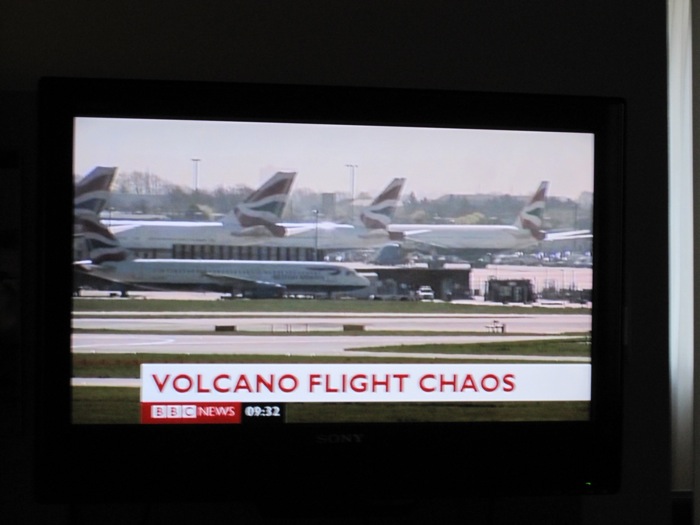 In the morning, my train to York was delayed a bit, sor I sat in a cafe waiting. And finally, finally, after a 2-hour ride north, I was back in York. And was it beautiful.

The city seemed like it had changed magnificently. Daffodils were in bloom all along the city walls and the trees were beginning to bloom. It seemed that had arrived back at the perfect time. It almost made me wonder if I had missed more of this. April 18 must have been the tail-end of the prime daffodil season in York, they must have reached their peak of beauty just a few days earlier. I hoped that, if this volcano cleared up, my parents would be able to see York like this. 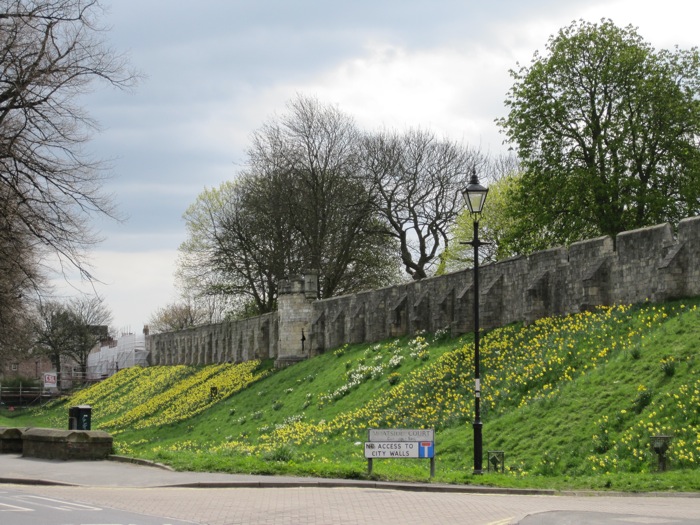 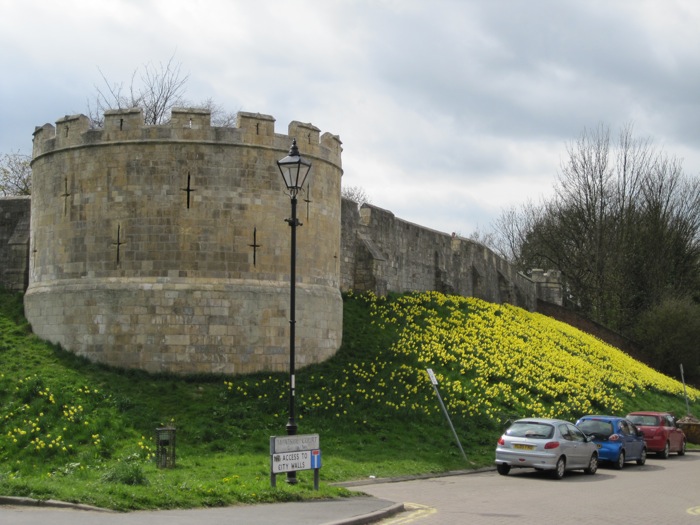 A fleeting moment at the beginning of spring in York

After getting back to my musty room, I uploaded all the pictures I had taken over spring break. That evening, I skyped with my family, telling them that I had made it back to York in one piece. We talked about the volcano situation. My parents decided not to cancel their tickets, even though all flights in and out of Europe were still grounded. … I really did not want to go to classes the next day. 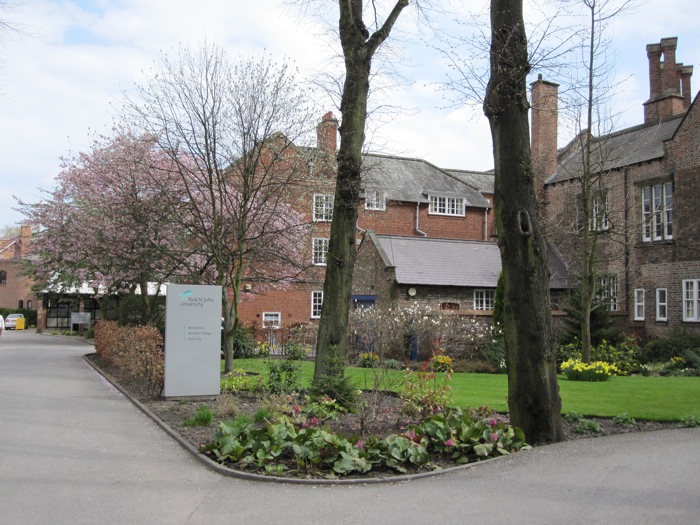 Back on the campus of York St John – buds opening, flowers beginning to bloom

Monday morning it was not really a surprise to me to find out that several of my classmates had not made it back from the continent from their sundry spring break destination. About 8 out of our group of 27 were stuck on the continent. Some had gone to great measures to get back, including taking the ferry from Calais to Dover. Others just got an extra week of spring break. They had no choice but to wait.

It was hard to do homework, but Dean was trying to be flexible about the schedule of due dates. A lot of stuff was going to come up fast in the last month in York.

Tuesday I was obsessed with checking the news online or watching it in the dining hall on the big screen. I had collected a lot of brochures and papers over spring break, intending to include them in my commonplace book. I laid them all out on my bed, and started sorting through them, taping them into my book piece-by-piece. I caught up on my journal, and ordered another one. I was getting close to the last pages of my Moleskine, so I needed to start a volume II. I also managed to fit in a trip to Sainsbury’s and figuring out which classes I needed/could take in the fall back at Calvin, for my registration date was Sunday. And between all that I did my homework, starting research and writing for several of my papers. My goal was to get the majority of my work done before my parents came. By late that evening, the reports about the ash cloud were better, and the at 10:00 PM, the U.K. decided to open all its airspace again! Hooray!

Wednesday was boring in the sense that I basically woke up, and did homework all day. I don’t think I even got out of my pajamas. I took breaks by doing some of my more fun homework — my commonplace book. Then all of Europe reopened their airspace just in time for my parents’ flight! My brother Philip used Skype on his iPod Touch to let me know that our parents had made their way to the airport, and they had left for Detroit. They were on their way to the Netherlands — and then me in he U.K.!

Thursday morning I learned that my parents’ flight to Amsterdam was a success. My mood lightened substantially, now that I did not have a volcanic ash cloud to worry about. In class, we discussed George Bernard Shaw’s The Devil’s Disciple. I really did not like this play or learning about Shaw. Perhaps I would rather see plays performed. Reading them takes a bit more effort. Or I just really was not a fan of this particular play. Simple as that.

When I got back to my flat, my flatmate’s girlfriend told me that a parcel had come for me. It must’ve been my new Moleskine already! I was proud that I had journaled every day of my semester. Writing was sort of my companion for everyday, even though really I was talking to myself.

Friday I finished all my British Culture class readings and wrote more of my feature stories and got caught up on Where Angels Fear to Tread by E.M. Forster. I also wrote an essay for my “The Medium is the Message” class (one of my YSJ classes). After a load of laundry, I went to Dean’s house in the early evening to catch up with a lot of people who had finally returned from spring break and had a long week of catching up on homework and whatnot just like I did. Overall, I felt pretty productive, but in true semester-in-Britain fashion, we were going on another excursion on Saturday: Yorkshire Dales. I knew that really I had nothing to complain about. I was in England, after all.