I was a bit reluctant to put my hiking shoes back on the morning of our excursion to the Yorkshire Dales. They were the only pair of shoes that I had with me for 3 weeks, and after a week back in York wearing slightly more comfortable shoes, I wasn’t ready for them. But we were up for another day of hiking — and in the Dales no less — so I put them on without another thought. 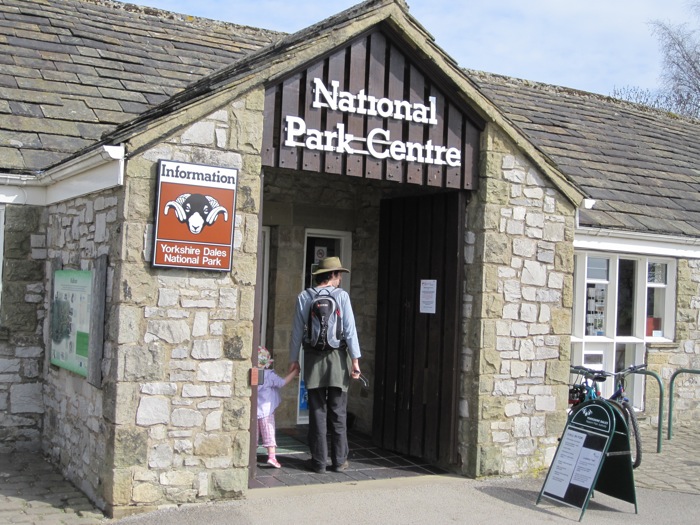 Turns out, the Yorkshire Dales trip was a leisurely hike. We started in the small town of Malham. We did not take ourselves too seriously on this excursion, and the sun was bright and warming. We split into 2 groups: the group that could walk 8 miles fast, or stroll with Dean. I strolled with Dean. Unlike our trip to Haworth, there was no mud. The dirt was pretty dry. So we strolled along hedgerows, stone walls, gnarly trees, and along rivulets. 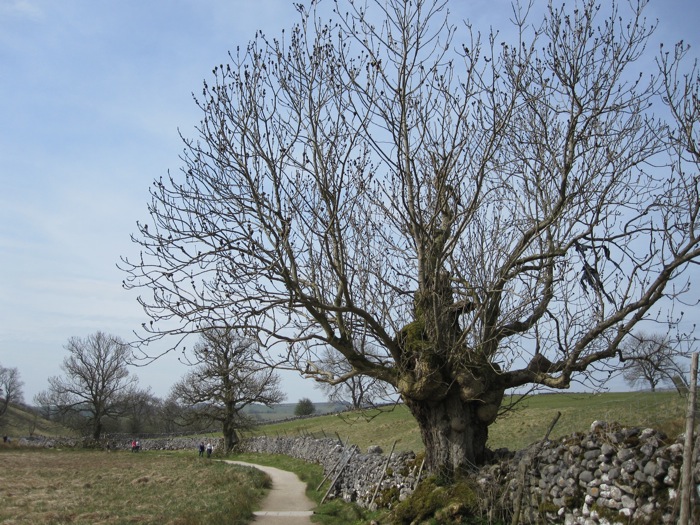 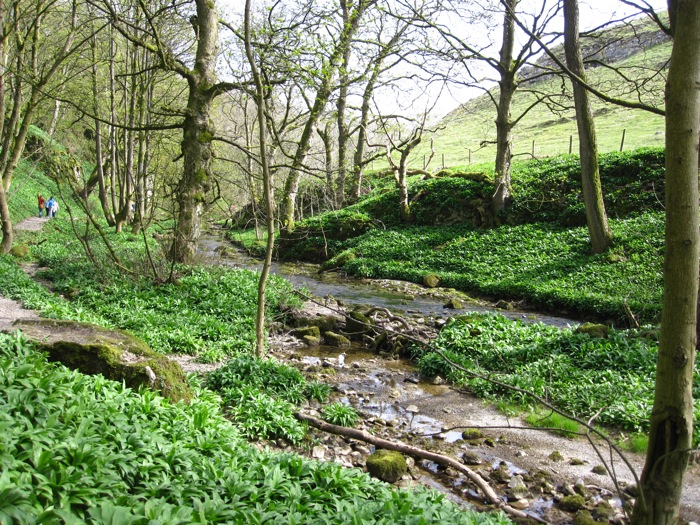 A glen of sorts in the Yorkshire Dales 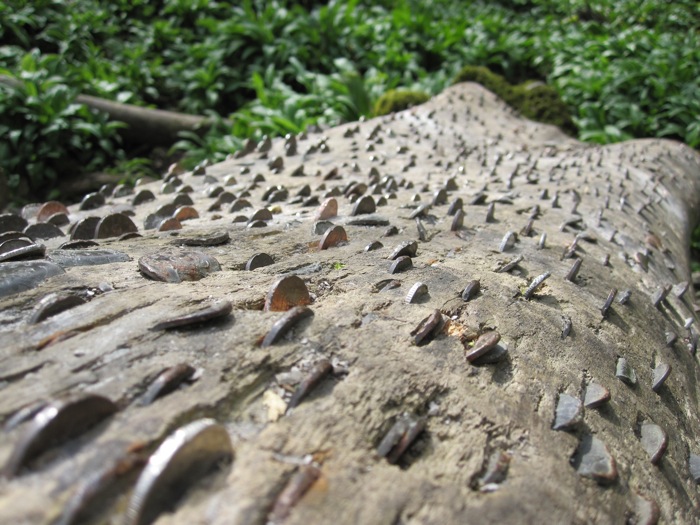 How many pounds sterling do you think are stuck in this fallen tree? 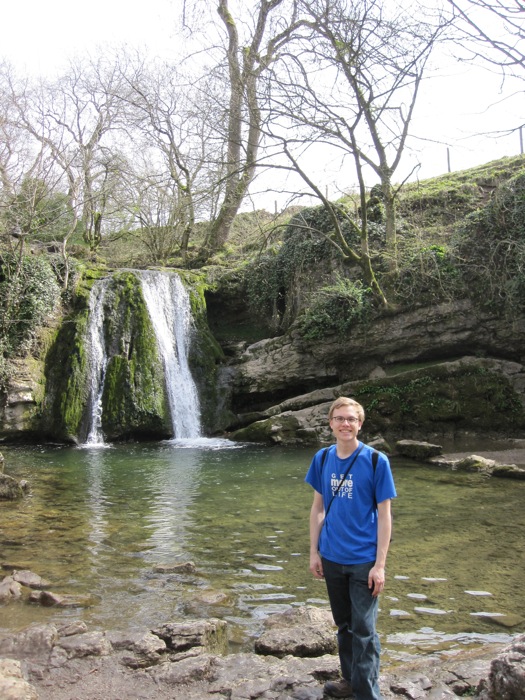 When we walked into one of the dales, I thought it resembled a landscape in the state of Montana. The karst landscape was also reminiscent of the Burren, near Galway, Ireland, where I had been nearly 3 weeks earlier. We did climb up some semi-treacherous rocks, but they were only treacherous because a 3-tiered waterfall spilled over them, making them slippery. 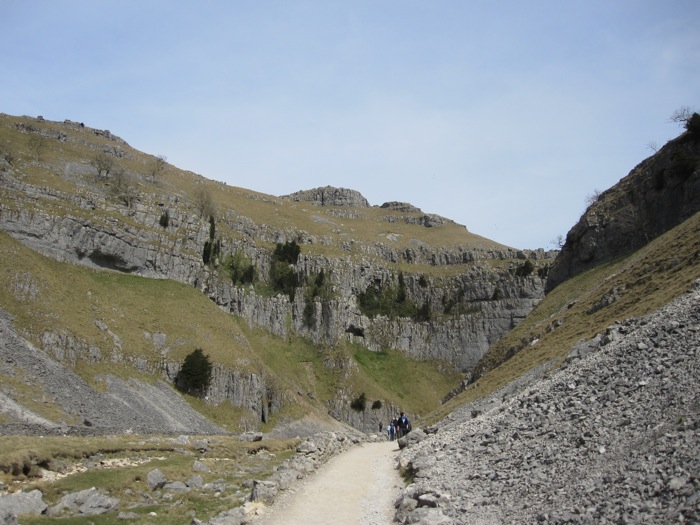 Entering the dale; surprisingly wide and level paths most of the way in – or as Dean put it, “Even grandma can use a wheelchair on these paths.” 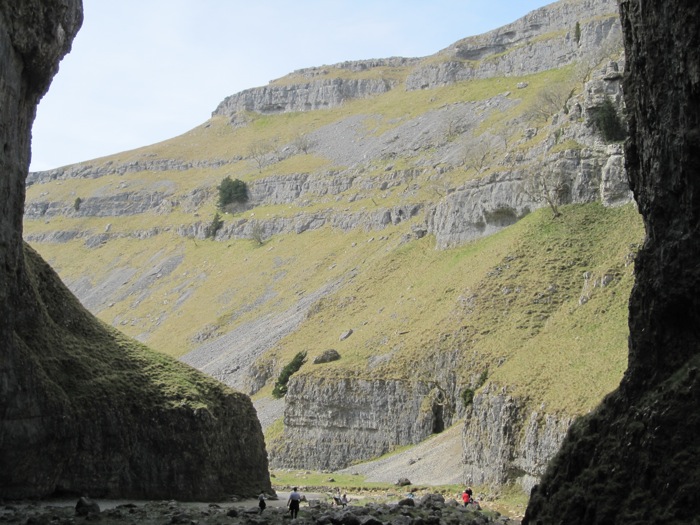 A grey-green landscape, deep in the dale – kinda looks like Montana, don’t you think? 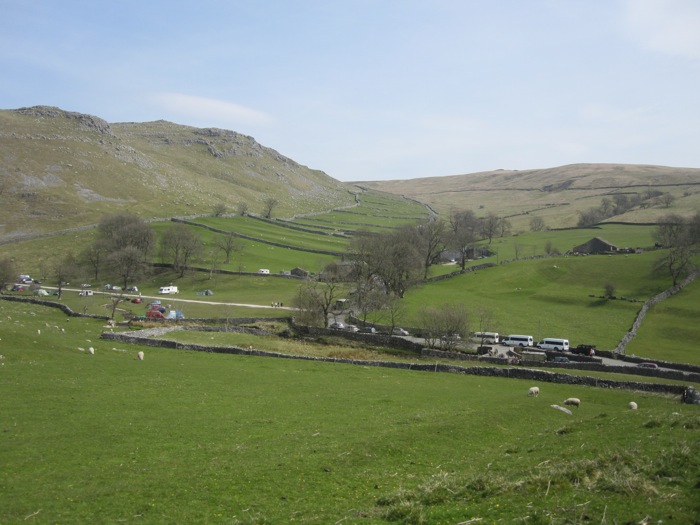 Fields are partitioned by stone walls and go up the hills

In the sun, it was quite warm, almost hot, but in the shady glens it was about 10 degrees cooler. I found a patch of onions or leeks growing next to a fallen tree. People had inserted coins into the fallen trunk over time, like it was some kind of wishing well.

After a lunch break in the dale, we hiked to another location, this time up high. We found this cool karst cliff. This was the most Burren-esque of all the sites. Karst is an eroded limestone landscape. (It’s hard for me describe or understand how this kind of landscape occurs, but looking at the pictures should give you a good sense of what it is like.) When I walked on the rocks, some of them wobbled beneath my feet. Some of the girls sat on the very edge of the cliff, but I was just fine sitting back a few feet. A few branches grew out of the rocks, wavering in the gentle breeze. Below, a stream wiggled off into the hazy distance and low blue mountains. 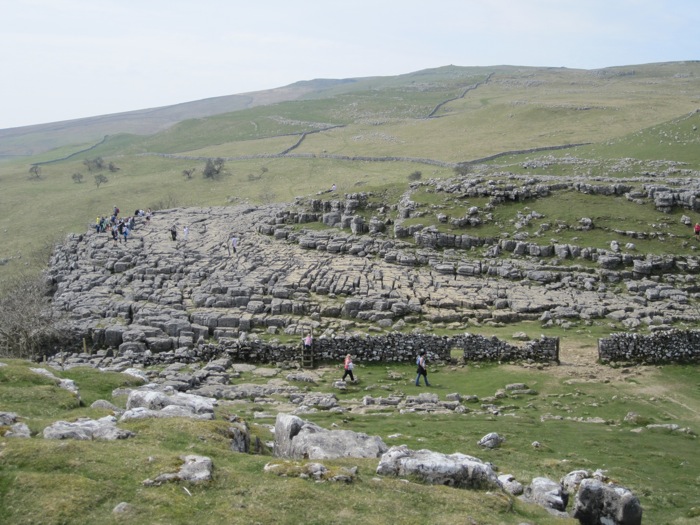 Sidenote: I later discovered that this exact location had been used in the filming of Harry Potter and the Deathly Hallows. It’s a scene where Harry, Ron, and Hermione were going from place to place, camping, so they would not be caught by the Death Eaters, et al., while they hunted for Horcruxes. 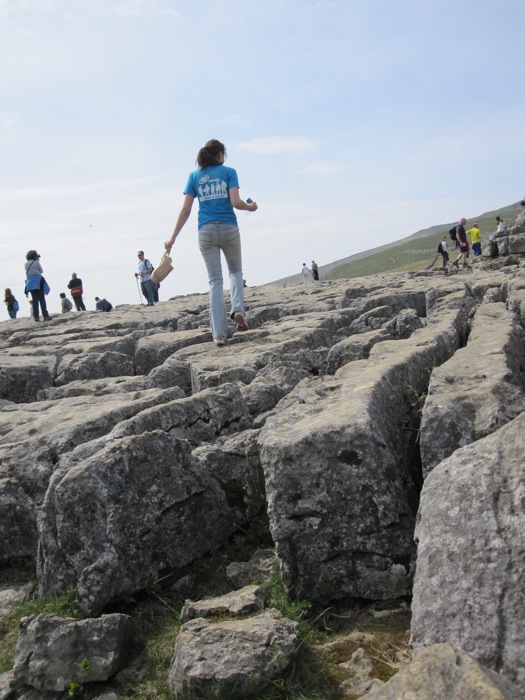 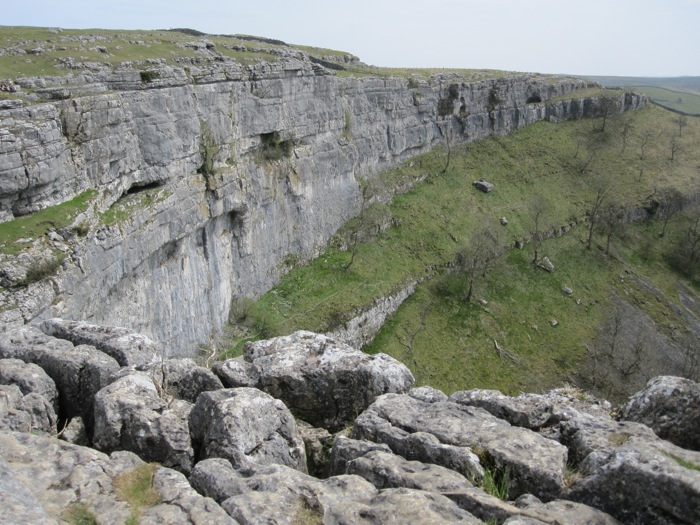 The cliff near Malham 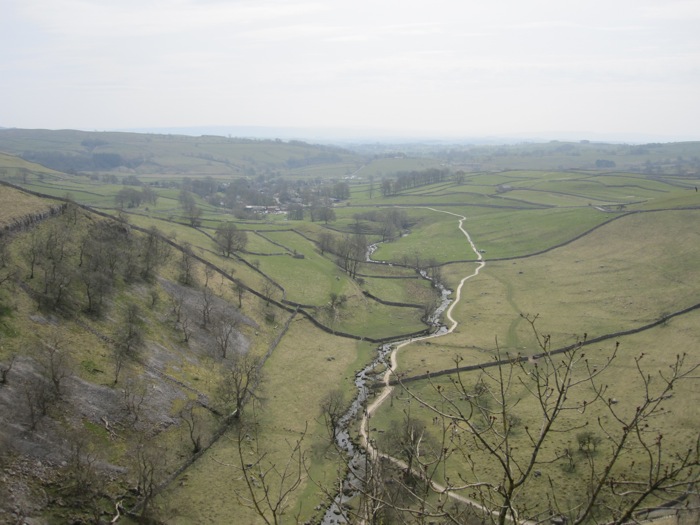 The rivulet winding and fading into the distance below 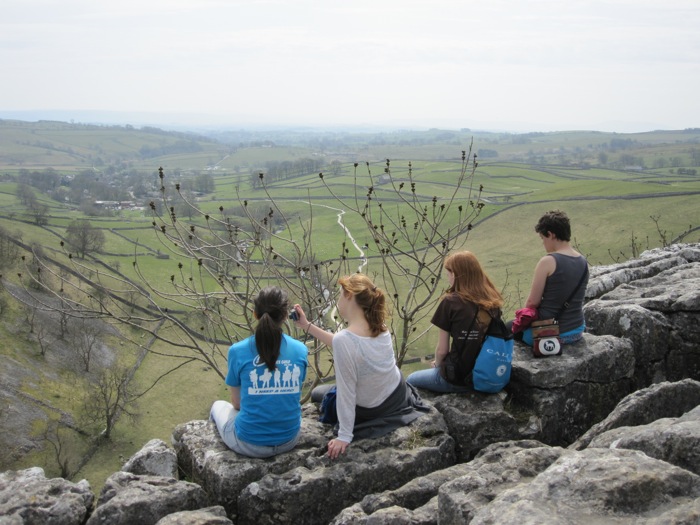 We did not have to rush to get back to the coach before nightfall this excursion. We actually took great pains to make our time stretch to 3:30, when the coach was set to depart. Back in the town of Malham, I ordered a strawberry ice cream at the Old Barn Inn (I think that’s what it was called). We sat by a babbling brook and fed two ducks. The ducks seemed to be a couple. 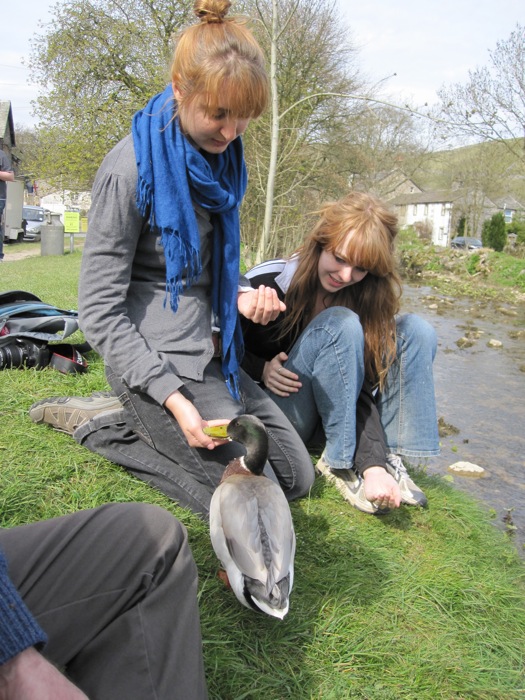 Sanna and Megan and our duck friend in Malham

When we finally got back to the bus, we found that the fast group had already returned and were reading books and whatnot.

In the end, Yorkshire Dales turned out to be a refreshing reminder of why I was in England. Yet again, I was present in an astonishingly beautiful English landscape that was somehow familiar, yet altogether different that something I had experience before. 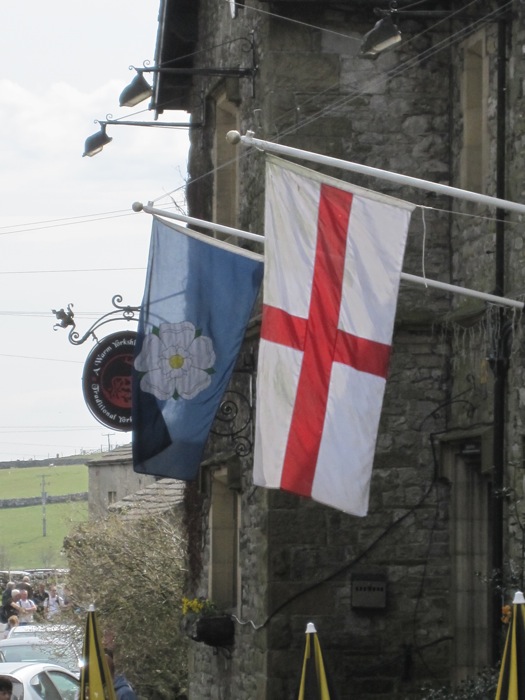 I finished Where Angels Fear to Tread by E.M. Forster on the coach ride home. The book ended better than I thought it would. Still not my favorite book from the semester (that’d probably have to go to Great Expectations or Middlemarch), but better than Shaw’s Devil’s Disciple.

After our return to York, I stopped in Sainsbury’s to pick up a few typical English treats to give my parents as a welcoming gift to England: hobnobs, Jaffa cakes, Sainsbury’s dark chocolate, and some other groceries for myself. I video chatted with my sister in her dorm. I worked on my YSJ class paper, leaving 500 words to write another day, and set my alarm early. I had to wake up for registration for fall classes at Calvin in the morning. 7 AM! Coming up: my parents vist this week!


Previous post: Hoek van Holland to Harwich and Back to York
Next post: Parents in York – Day 1
Tags: Forster, Where Angels Fear to Tread, Yorkshire Dales
Posted in Excursions, Journal