Early Sunday morning I registered for fall classes at Calvin. I got into all of the classes I needed and wanted except one. I’d have to take Creative Nonfiction instead of Writing for the Media, toward my Writing minor, but the latter was not being offered. Since I was up early, I decided to finish my Medium is the Message class essay, then get started on my Roads to Revolution essay. I had done a lot more research done on my Roads to Revolution essay throughout the semester, and had a pretty good outline, so I thought it shouldn’t take me too much time. I just looked to Tuesday, when my parents would arrive, to get me through two days of hard work.

Monday I turned in my essay to the Faculty of the Arts office. I forgot where the office was, so I went into 2 different sections of the Quad before I found it. (In case I have not talked about it before, the Quad is the square building in the middle of campus. It seems to have been built piece-by-piece — or at least not arranged in any logical way other than the fact it was a quadrangle. Some doors were smaller than others. Stairwells go up and down in odd directions. Hallways narrow inexplicably.) The way one had to turn in papers was very strange, too. I had to fill out some kind of form that could be folded over my stapled essay, and sealed –so my name could not be seen to the graders — and I got to keep a tear-off slip as “proof” that I had turned it in.

Roads to Revolution was a movie and review day, Medium is the Message was cancelled (which meant I’d never have that class again! just the papers and projects!), and in British Literature, we discussed Where Angels Fear to Tread. Following a dinner of lamb hot pie, I wrote a lot of my Roads to Revolution essay on the English Civil War.

Skype pinged me that my parents were calling. My parents were with my uncle and aunt in Heerhugowaard (where I was just a few weeks previously), and I told them how to use the train once they landed in England. I had given Tannie and Piet my parents’ rail tickets, so they’d have them straight away when they made it to Birmingham.

Tuesday morning: Parents-in-York Day! I did not sleep too well because I was too nervous/excited, anticipating my parents’ arrival. I kept my eye on the clock during class in the morning, ticking off the times they were supposed to be doing important transportation transitions. 9:40 AM, Dutch time, leaving Amsterdam. 10:00 AM, U.K. time, arriving in Birmingham. Going through customs. 11:38 AM train from airport to Birmingham New Street. 12:03 PM, train from from Birmingham to York!

Class finally let out, and I went back to my room to pick up the stuff I had bought as a welcoming gift for my parents (hobnobs, jaffa cakes, Yorkie bar, fruits sqaush, etc.). I walked to the center of the city, and bought a few Sandwiches at Mr Sandwich in the Shambles for my parents. They’d probably be hungry once they got off the train.

I arrived at the York Railway Station with plenty of time to spare, so I read a few chapters of Bill Bryson’s Notes from a Small Island, which I had been carrying with me for leisurely reading throughout the semester.

I made my way to Platform 10, where their train from Birmingham was due to arrive. I was wearing my red coat in hopes that they would spot me easily when the got off the train. I stood under the YORK sign.

Finally, their train arrived. I saw my mom’s head first, but my dad had gotten off first, but a man got in my way to wave at him. I nudged my way through the crowd getting off the train, and tapped my dad on the shoulder, but my mom spotted me before he turned around to see me. I’m not quite sure what all happened next, but I know there were a lot of hugs and kisses — a very joyous event indeed. I said, “Welcome to York.”

This was semi-surreal. My parents’ — who I had not seen in person for nearly 3 months — were here in York, with me, thousands of miles away from home.

The Whirlwind Tour of York Begins

I took one of my parents’ 2 suitcases, and led them out of the train station. We took our time, so they could admire the architecture of the station, and the busyness of all the trains and people coming in and out.

It was a bit tricky to be a tour guide, showing them some of the great sites along the way, whilst trying to bring them to their room at the Brentwood, which was about a 20-minute walk on the busy York streets. The trees were still flowering and the River Ouse was still flowing, and the weather was not bad at all.

I had found their bed and breakfast — The Brentwood — several weeks earlier, after my parents had looked up possible places to stay online. I went around York on foot, finding each place, and I told them which places looked like the best to stay, taking into consideration the distance from my flat and from the city centre. The Brentwood was located in the Bootham Crescent neighborhood, down the road from Bootham Bar, and there was a shortcut that went past the hospital, nearly straight (as straight as one can go in York) to my neighborhood in the Groves.

The hosts of the B&B were warm and friendly, helping my mom and dad up to their first-floor room (that’s the second floor, by American standards). The room was lovely and had an en suite bathroom. The view was not much, but my parents would only be sleeping here after I kept them out late. Ha!

Before heading out again, the hostess gave us a map of York (even though I doubted we’d need one, since I had a basic map of the main streets in my head already, but it was a nice souvenir nonetheless), and my parents ate the coronation chicken sandwiches I had bought for their lunch.

And then we were off. I took them to Markham Crescent first, to show them were Dean and Nancy were living for the semester, which was on our way to my flat in the Grange. I showed them Eldon Street (even though it isn’t really much), since I walked on it nearly every day to and from class/the city. 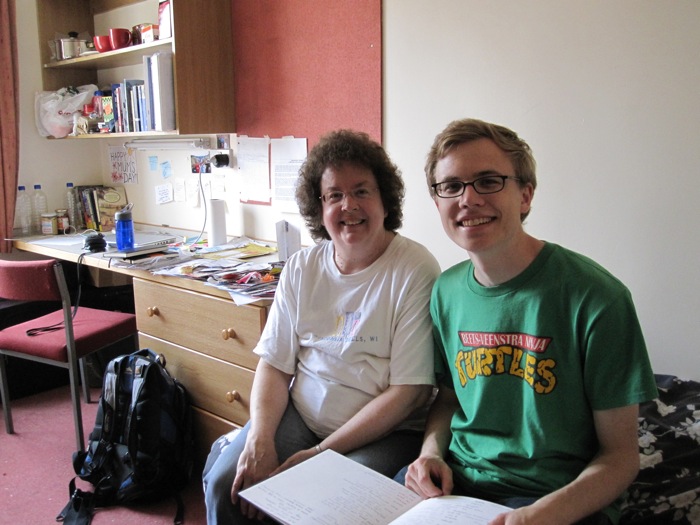 I show my mom my commonplace book in my flat

I showed them around my flat: the messy kitchen, the W.C. and shower room, and my room upstairs. Now they were on this side of the webcam. They had seen it all on Skype, but now they saw it all in person.

Next was a tour of the York St John campus. I showed them the Spar and Londis convenience stores and St Thomas with St Maurice Church, where I had gone for a couple services, on my route there. I showed them were other Calvin students were living in the Lord Mayor’s Walk dorms.

We took a look around the Quad. We stopped in the dining hall, where I ate most of my meals. I showed the “modern” academic buildings. DeGrey, Foss, and Skell, and the rooms where we held class, and the library — so they could get an idea of the school. 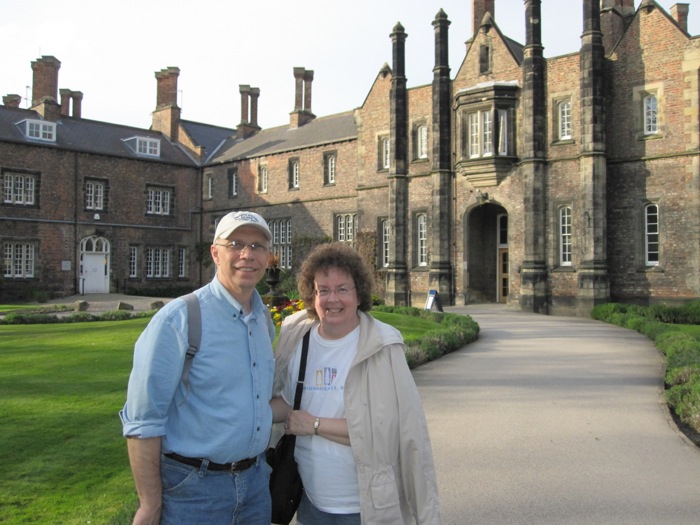 My parents outside the Quad at York St John University

We strolled down Lord Mayor’s Walk to Monk Bar, and made our way up the winding streets to the Shambles. We stopped at the Minster, of course, and I stood in awe of my parents having their “in awe” moment under the Minster for the first time. Most of the shops had closed by now because it was past 5 PM, but it was nice to show my parents the city unhindered by lots of pedestrians and traffic. Tomorrow, they’d be able to see how filled with people the streets could get during the day. 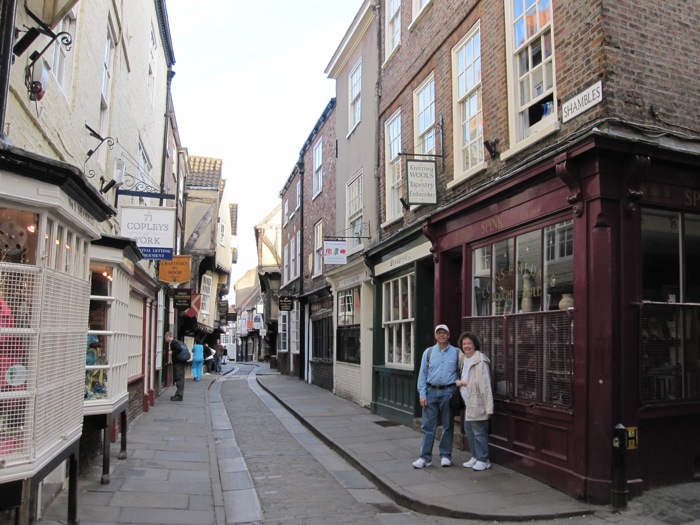 Dad and Mom in the (fairly empty) Shambles 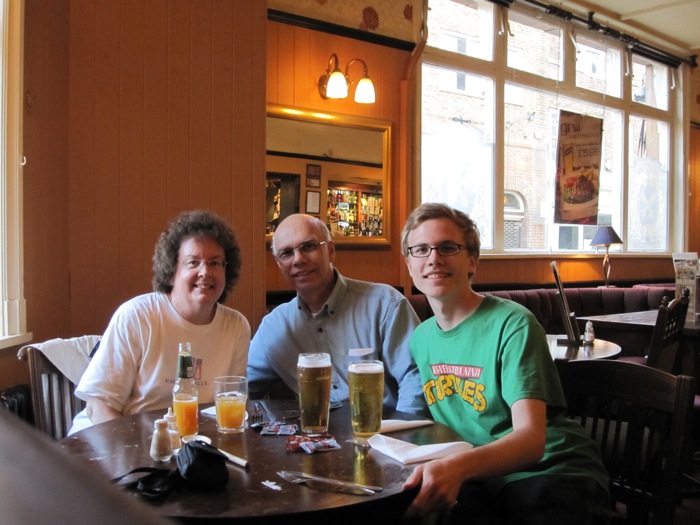 Our meal at the Cross Keys pub

Cross Keys was our destination for dinner. The pub was quiet (unlike my previous experience there, when a football match was going on). I just wanted to take them to a nice English pub. My dad had fish and chips, and my mom had bangers and mash. I had fish and chips as well. My dad tried a pint of Foster’s, while I had Stella Artois; Mom had citrus J2O. 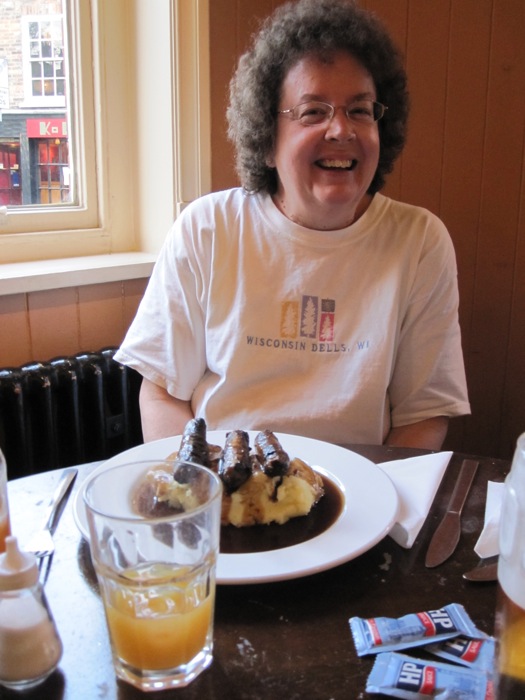 Mom laughing and enjoying her bangers and mash at Cross Keys 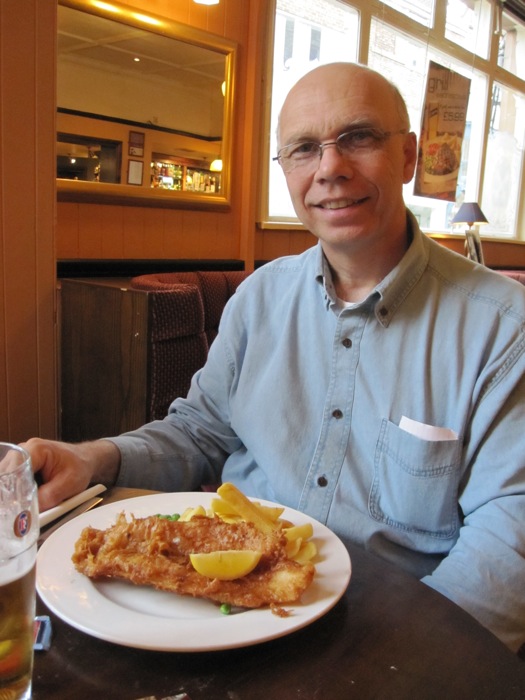 Dad enjoying his fish and chips at Cross Keys

Since we had been keeping in touch over Skype so well, we picked up our conversations right where we had left off. I didn’t feel the need to summarize the last 3 months to them, yet it was still a different experience to have my parents sitting across the table from me again.

It was nearing dark when we left the pub, so we’d probably have to call it a night soon, but we managed to walk around a bit on some of the city walls. I decided to take them on part of the city wall near Monk Bar, before heading back through campus and the back streets to my flat.

We Skyped with my siblings back home, just to let them know that the parents had made it safely and what we had done on on day one. Lots of trans-Atlantic laughs and stories went around.

It was pretty late by the time I walked my parents back to the Brentwood in the dark. They would have been pretty lost without me, I’d like to think, but they tried to remember the route a little bit. The shortcut path from the Groves to Bootham Crescent was a nice fast way from my side of York to theirs.

I had a jam-packed day up my sleeve for them the next day. I had said to my parents, “Be prepared to walk A LOT.” Not that we hadn’t done a lot of walking today, but day two would be even more.