With one month left of my semester in Great Britain, I was celebrating for 3 short days with my parents in York.

I let them sleep in just a bit. I arrived at their bed and breakfast around 8:30 AM. They were eating breakfast in a small room at the back of the Brentwood, and talking to the hostess and chef (who were wife and husband). They had been served a full English breakfast, and were finishing up their toast when I pulled up a chair next to them. The dining area was cozy and nicely decorated with antiques, trinkets, and English wall art.

We went back up to their room, so they could get their coats and sack for our day out in York. We had a lot of walking ahead of us. I took a moment to give my mom as a belated/early Mother’s Day gift–the U.K. Mum’s Day had been March 14, but the U.S. Mother’s Day was not till May 9. It was a silver (Christmas) ornament that I had bought in Kinsale, Ireland. (A secondary reason that I wanted to give it to her now was that it was delicate, and I didn’t want it be crushed in my luggage on the way home a month from now.)

We trekked down to Bootham Bar, stopping to take the (practically mandatory) pictures in red telephone booths that are scattered throughout Britain. Before ascending the city wall, I showed my parents the Three Legged Mare, one of my favorite pubs in York. We then made the “circle tour” of the entire city walls. The daffodils were still in bloom (at least more than half of them, but they had been waning from their peak for some days now). 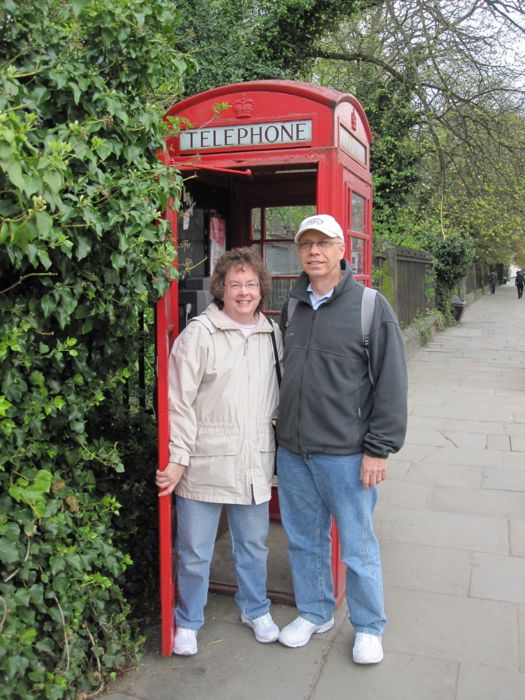 Mom and Dad in a classic red telephone booth

Me in a classic red telephone booth

We started at Bootham Bar, headed south toward the Railway Station and the war memorial. We stopped often to take pictures of the sights/sites along the wall, and I made sure my parents looked back every so often, so they would not miss the spectacular view of the wall winding back toward the Minster.

I told them the names of all the “bars” in York. No not pubs. Micklegate Bar, Walmgate Bar, Monk Bar. I made sure they saw the hall-like entrance, called a barbican, at Walmgate Bar. That’s the thing about York. York is a city where “bars” are gates, “gates” are streets, and “pubs” are bars.

Briefly we got off the wall to detour at Clifford’s Tower and the York Castle Museum. I showed them the grocery stores I typically went to, Sainsbury’s and Morrison’s. (Hey, I had to show them my everyday-life in York, too, not just the old landmarks!)

We came to rest at King’s Square, my favorite of all of York’s open spaces. I bought my parents pasties from the Cornish Pasty Bakery, and they got to experience the pecking hoard of pigeons, yearning after every speck or crumb that dropped from their pasties. Next we stepped inside Caffe Nero for some frappe milkshakes: Mom had strawberry, Dad had chocolate, and I had citrus, even though I meant to get banana.

Sipping our milkshakes, we wandered through the Shambles once again, this time heavily populated with people. Now my parents could see the difference between the day hours and night hours in York. I showed them a few things I had learned about the Shambles, like the shrine to Margaret Clitherow, a Catholic martyr; the Pump Square, where John Wesley peached; and the fact that the deep window sills were used for selling meat–as all city “shambles” used to be the street for butchers.

Newgate Market was bustling. Mom found a set of handkerchiefs she liked, and bought them from a street vendor. She said it was hard to find nice handkerchiefs for women in the U.S.

From Parliament Street, one of the widest, longest streets in York, I took them to one of the narrowest, shortest (or the shortest) street in York: Whip-ma-whop-ma-gate. We entered Minstergate Bookshop–I just wanted to give my parents a taste of one of the many bookshops in York, full of many old and new books, winding staircases, and rickety shelves and creaky floorboards. Lovely places, bookshops–I mean that in all sincerity.

Our next stop on our quest through York was the monolithic cathedral in the center of the city: York Minster. It was time to explore inside. Even though I had been inside the Minster myself for a church service and a few times in the “free” section.

We roamed around the main floor for a while, and down in the crypt, but soon we decided to go to the very top. The views of York below were breathtaking — like we needed our breath taken away after climbing 275 stairs up. I could point out all the places I had come to recognize: the Nestlé factory, the Grange, Clifford’s Tower, main streets like Stonegate and High Petergate — scattered all through the tiled roofs of the city. 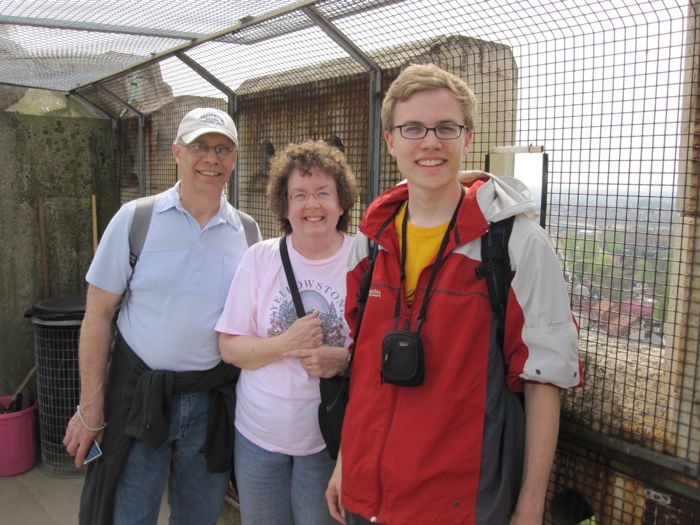 With my parents at the top of York Minster

Ascending the tower of the Minster made everything come into perspective, not just the city below: my parents’ visit made me realize how much I had learned in my short time in the UK I was able to take them in an efficient route around the city, tell them a bit of history, and, beyond that, tell them stories that I knew I’d be telling for the rest of my life. 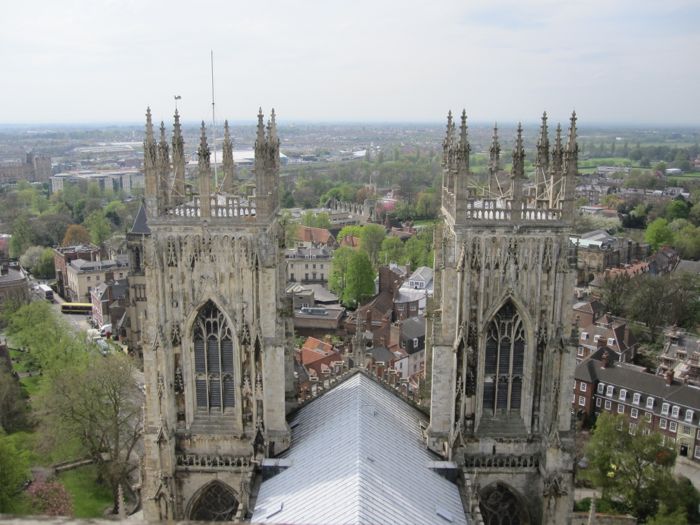 Towers of the York Minster 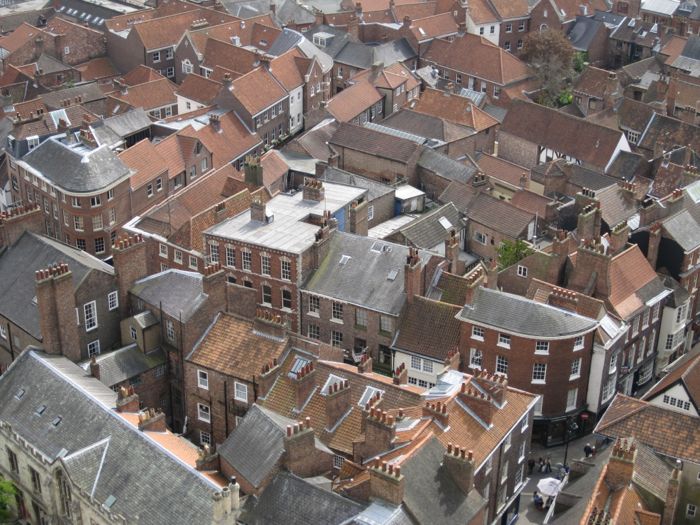 We were exhausted by the end of the day, and we rested in Dean’s Yard, listening to the spring wind blowing through the trees. We moseyed to dinner, first stopping at Grays Court gardens to take photos of the nice blooms. 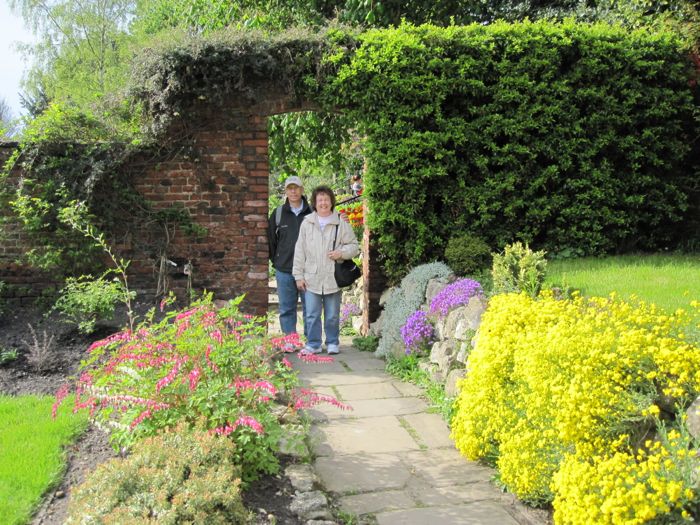 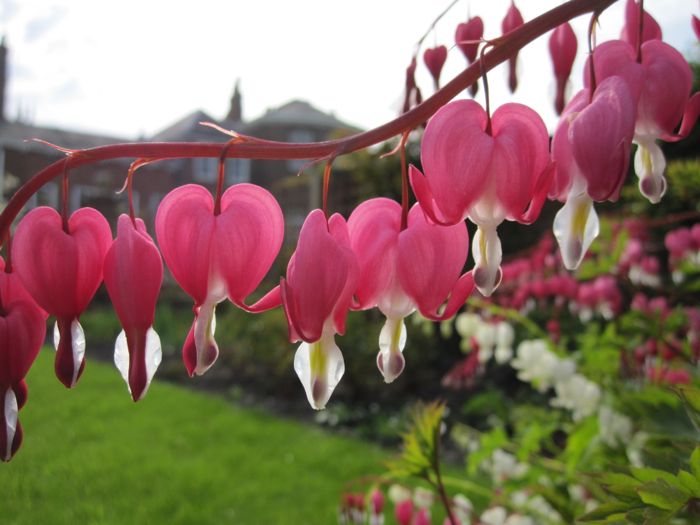 For dinner, we went to the Old White Swan on Goodramgate. We all had varieties of toad-in-the-hole for dinner. My dad had Cumberland sausage; Mom, Lincolnshire whirl; me, wild mushroom, herbs, and black pepper sausage. The portions were so big, only I finished my plate, even though I was absolutely stuffed.

To walk off our meal, I took them to see the bombed out church on Coney Street and Betty’s Tea Rooms (even though it was already closed), then walked the final portion of the city wall back to Monk Bar. We walked one more time through the YSJ campus, then stopped at the Spar on Lowther Street so they could buy a few breakfast and snack items for their train journey to London.

Back in my room one last time, we Skyped with my brother, but we all had a hard time staying awake. I gave them some more advice on London, such as how to use the Tube, where to go first, etc. But it was time for bed. We sleepily walked back to the Brentwood.

Their time in York was fast and short, but I’d have to let them go off on their own to explore London. (In retrospect, I wish I had gone to London with them.)