The following article was written for my British Culture: Tapestries and Networks class, one of my Calvin College courses here at York St John University. Therefore, it’s a little different than my typical blog post. Enjoy.

I anxiously watched the live coverage of the Health Care Reform bill debates on the night of March 21, 2010, on news websites wondering if the U.S. House of Representatives would pass the bill. But since I was in a time zone five hours ahead of Washington, D.C., I went to bed before learning the result. I woke up to a 219-212 victory for the bill. No Republicans voted for the bill, while most Democrats did. After the Senate passed the bill, President Barack Obama signed it into law. I witnessed all of this from my room in York, England, watching American politics from afar, and wondering how the politics of the United Kingdom were different the United States. 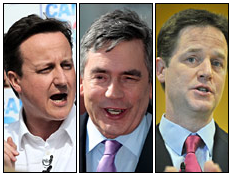 The U.K. is currently in the middle of a General Election period, one that will elect a new prime minister, and it is getting really interesting. Currently, there seems to be a three-way race between the incumbent Gordon Brown of the Labour Party, David Cameron of the Conservatives, and the newly popular Nick Clegg of the Liberal Democrats. Election day is May 6. On that day, U.K. voters will vote for the party they like best, and the party that gets the most votes gets to form the new government. The party that comes in second place will form Her Majesty’s Loyal Opposition.

On the other side of the Atlantic, the U.S. is no longer debating Health Care (at least not the bill, but maybe the law), and it has been over a year since Obama was inaugurated as U.S. President. One may argue that it is always election season in the States, as U.S. Presidential elections are usually dragged out for at least two years in advance to the actual day of voting, with the news media constantly picking out potential candidates for 2012 and beyond.  But not in the U.K. Election coverage here is intense, but only has been for the past month or two. So with the recent passing of Health Care Reform in the U.S. and the hubbub of the General Election in the U.K., I thought it would be fun to compare and contrast the U.K. and the U.S. political systems. It took a bit a research on my part, as an American, to familiarize myself with the U.K. system, and I am sure still do not understand it as well as the U.S. system. (Perhaps if I were Canadian I would understand the Parliamentarian system better since the Canadian system is largely based off the system of the U.K.) Politics and political systems are complicated, as always, so this is my attempt to present the similarities and contrasts as simply and as concisely as possible.

Why do the Brits still have a monarch? That is topic for another story altogether. But I will say that I do not see the Brits getting rid of their monarch anytime soon (“God Save the Queen”!), in the same way they have not gotten rid of the Pound Sterling to join the eurozone. Debates about whether they should dispose of the royal family and peerage system all together will continue in the background for years to come. When it comes to the constitutional part of constitutional monarchy, the U.K. in reality does not have an actual written Constitution with a capital C as does the U.S. Instead their system of government is based on precedent – laws from the past – relying more on tradition and a loose collection of laws rather than a single written document with a few amendments. In that way, the political system in the U.K. is somewhat more malleable. Without turning myself into a constitutional theorist, the U.S. Constitution is a bit more fixed, thus more difficult to change. In some ways it is much harder in comparison to amend the U.S. Constitution perhaps, than it is to change a single law in the collection of laws that make up the “constitution” in Britain.

Both the U.K. and the U.S. systems allow for multiple political parties. The U.S. Constitution is silent on political parties; however, the U.S. has developed a two-party system dominated by the Democrats and Republicans, and occasionally a third-party candidate or independent manages to win a seat. Although the Labour and Conservative parties have dominated British politics since the 1920s, the U.K. has more of a multi-party system than the U.S. The Liberal Democrats (formed from a merger of the Liberal Party and Social Democratic Party in 1988), for example, usually come in third with a fairly substantial amount of votes – at least more substantial than any third party in the U.S. The Labour Party is the centrist or left-of-center party, while the Conservatives (a.k.a. the Tories) are the center to right-of-center party. The Liberal Democrat Party is also a center to center-left party, like the Labour Party, but takes a more social liberal stance. Compare this to the Democrats in the U.S., who usually take a center to left-of-center approach to policy, whereas Republicans, in general, tend toward the center to right-of-center. While there are usually two major parties in the U.K., it is not as set in stone as the Democrats and the Republicans in the U.S., the two parties that America seems to have settled on almost completely years ago.

The reason the General Election has gotten so exciting lately in the U.K. is that Nick Clegg and the Liberal Democrats—the party that was in third place—has skyrocketed in the polls after the first prime ministerial debate on April 15. This was the first debate of its kind ever held in the U.K. This is a strange thought since American presidential debates have officially been held since the 1960 Nixon-Kennedy debate, but in format go back to the 1858 debate between Abraham Lincoln and Stephen Douglas (not for president, but for the U.S. Senate). It is not like the British political parties have not thought of debating before – in fact, Harold Wilson first challenged the Prime Minister at the time, Alec Home, to a debate in 1964 – it has just never come to fruition till now because of party disagreements on debate rules and rejected offers. Once the winner of the General Election on May 6 is determined there will be no inauguration with all the pomp and circumstance. Once a party wins, the prime minister is almost immediately installed. The same day the previous Prime Minister resigns is the day that the new Prime Minister moves into Number 10 Downing Street. Speaking of which, saying who’s next in No. 10 Downing Street is like saying who’s next in 1600 Pennsylvania Avenue or the White House – it is a metonym, or name used as a substitute for something else with which it is closely associated.

In this U.K. election, the leaders of the parties are not only vouching for themselves, but for their party because they need an absolute majority in Parliament in order to become (or remain, in Gordon Brown’s case) Prime Minister. A candidate for U.S. President, however, runs for himself or herself. While a presidential candidate usually belong to a political party, their victory or loss is not tied to the success or failure of the Democratic Party or the Republican Party, depending on what party with which they are affiliated. As a result one is more likely to hear, for instance, “Vote for the Conservatives!” instead of “Vote for David Cameron!” because if the Conservatives win, David Cameron becomes prime minister. Americans will recognize this subtle difference, because if you supported Barack Obama, for example, in the 2008 presidential election, you were more likely to say, “Vote for Obama!” than “Vote for the Democrats!” when voicing your opinion about who should be the next leader of the nation. In addition, the Prime Minster of the U.K. is theoretically considered equal with all his Cabinet members, but has the added task of being the head executor of the decisions made by the government. The Prime Minister is given (now symbolically) this authority from the monarch. In the U.S., the President has a Cabinet, but they act more as advisers with less authority than the president himself. Plus, Cabinet members in the U.K. must be part of the House of Commons or Lords, whereas the U.S. President can appoint whomever he sees fit to carry out the different duties of each department, such as the Secretary of Defense.

Palace of Westminster, where the Houses of Parliament meet

In the U.S., the legislative body is called the Congress, whereas the U.K. calls theirs the Parliament. The metonym for referring to the legislature in the U.K. is Westminster, like saying Capitol Hill means Congress in the U.S. Parliament is bicameral – meaning it has two houses – much like the U.S. is bicameral. The lower house is called the House of Commons (similar to the U.S. House of Representatives), and the upper house is called the House of Lords (like the U.S. Senate). Members of the House of Commons are called MPs – Members of Parliament. The people elect MPs from 650 constituencies, or areas divided based on population, across the U.K. The U.K. uses a system called First Past the Post for electing MPs. Essentially this is a winner-takes-all system, similar to the U.S. Electoral College system, where whatever party gets the most votes in a constituency gets all the seats for that constituency. This explains why there usually is a party with majority rule in Parliament. But in the rare event that no party wins a majority, a coalition government can be formed in which the top two parties must work together to form a majority government.

The Parliamentary system becomes increasingly complex when you factor in the devolved national legislatures of Scotland, Wales, and Northern Ireland. These are separate assemblies below the U.K. Parliament (the Westminster government) that serve the people of these nations. England does not have its own devolved government. This is similar to how each State has their own government, but the major difference is that these devolved assemblies derive their authority from the U.K. Parliament, whereas the States have the right to exist from the U.S. Constitution.

In the end, while the U.S. and U.K. may have many things in common when it comes to political systems, the U.K. is still older and tradition has shaped the face of the political landscape for a longer period. The U.S. has traditions, too, of course, but we must remember that the current government of the United Kingdom is the system of government that the U.S. broke away from in 1776 plus all the changes that have happened since then – namely the continued limitation of the monarch’s power and the changing rules for the House of Lords. Since 1788, the U.S. Constitution has only been amended 27 times, further evidenced that with all political systems – whether in the U.S. or U.K. – any sort of change takes time. We’ll see what happens on May 6 and who is the next to reside in No. 10 Downing Street.