Speeding Toward the End and Stratford-upon-Avon

The End of All Things (Well, Almost…)

The days after Hadrian’s Wall I felt like I was speeding toward the end. Indeed, there were only 12 whole days left. I worked on my final essay for British Literature, honing my thesis on Middlemarch. I prepared some ideas for a conference with Dean. I thought I’d compare and contrast what choices the characters make toward self- and societal improvement throughout the novel and how those choices reflect Victorian times in England.

To pass the dull moments, I found more cool shows on the BBC iPlayer (if only the iPlayer worked in the USA!), such as “The Grumpy Guide to… The 1980s,” which took a negative look at the “most embarrassing decade ever.” I wouldn’t know. I wasn’t around for most of it.

There were more news stories of Eyjafjallajökull spewing an ash cloud over the UK and Ireland, but not as widespread as last time. This time I was a bit more confident that it would go away by the time we would have to leave, but if not so be it.

In my conference with Dean about my final paper, he told me I had chosen the “biggest book with the broadest topic” for my thesis. Which was true — so I had to laugh at myself first — but then he helped me narrow it down to be about a few instances in Middlemarch where one character gives another character a second chance.

The week was also filled with trying to catch up on my behemoth of a commonplace book. Really, I had brought it upon myself. Some of my classmates’ commonplace books were mostly journals. The format I had chosen was a bit cumbersome, since I had decided to include tiny illustrations and tape in brochures and other souvenirs, it was just time-consuming. Yet, I still enjoyed commonplace-booking over studying for the Brit Lit final exam, though I did some of that, too, which was the next day.

The exam the next day turned out to be different than I expected. Not that I think I did horribly, but I spent way too much time on the first essay, that I didn’t leave myself enough time for the second one. I rambled, and in general, couldn’t think straight. It was just like I was stating facts about the books we had read all semester and repeated my theses over an over in all the sentence combinations I could think of. Everyone at dinner afterward seemed to think it was tough, even the English majors. But at least it was over, and I spent that evening detoxing from the exam, watching more “Modern Masters” on BBC, this time about Pablo Picasso.

In the morning, I needed to get out of my room for a change of pace, so I spent the entire time in a favorite corner on an upper level of DeGrey writing out my essay by hand. Sometimes I find writing longhand rather than typing actually saves me time when writing essays because I can think more clearly. There’s more of a connection between head and hand when writing with a pen than when typing on a computer. This also allows me to edit and revise as I type up the manuscript.

Thursday, I felt a bit queasy. It was probably the non-stop commonplace-booking and paper writing. I went to Dean’s office to collect my last allowance of pounds sterling for my time in York. I got an extension on my paper, so I could devote my time to finish my commonplace book, but really I wished I had had more done and could be handing in everything tomorrow to give me an entirely free weekend. But such was the case.

In Edinburgh, the guys had hatched a plan to have a “Man Night.” Never too late! Thursday night was the night, and though I still felt queasy, I went. I figured, the worst that could happen is that I would throw up whatever was upsetting my stomach. We headed to the Three-Legged Mare. Funny thing is, the beer that I had, Constantine’s Ghost, somehow made me feel better. We had lots of good conversation and agreed to meet for part two the following night to watch Goodfellas.

The queasiness came back the next day, but not as severely. I guess the beer only temporarily relieved my symptoms. I think my body physically responded to all the nerves and emotions and thoughts running through my head as my time in York was quickening to a close.

I finished my commonplace book (as in up to Hadrian’s Wall, our latest excursion) just in time to bring it to Dean’s house for our regular Friday night get-togethers. All the doors on No. 16 were open, and it was warm enough for some of us to sit outside on the back patio. I had fun seeing how many clothespins I could clip together. I don’t even remember what all the night’s conversations were about, but it surely was one of the best nights at No. 16. 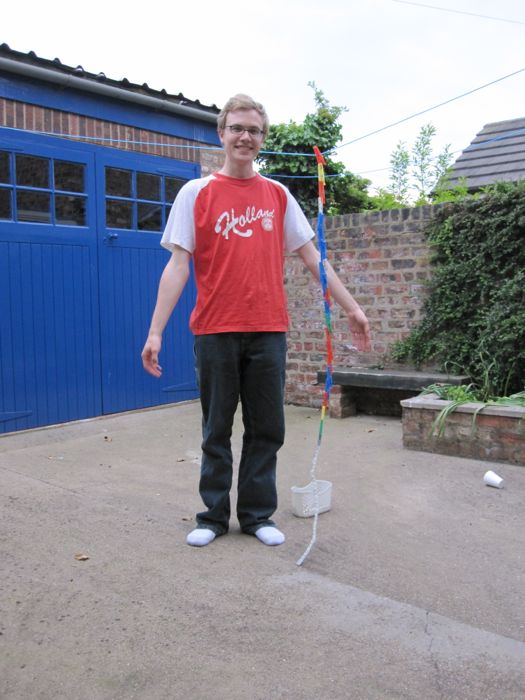 Me showing off my clothespin structure at No. 16 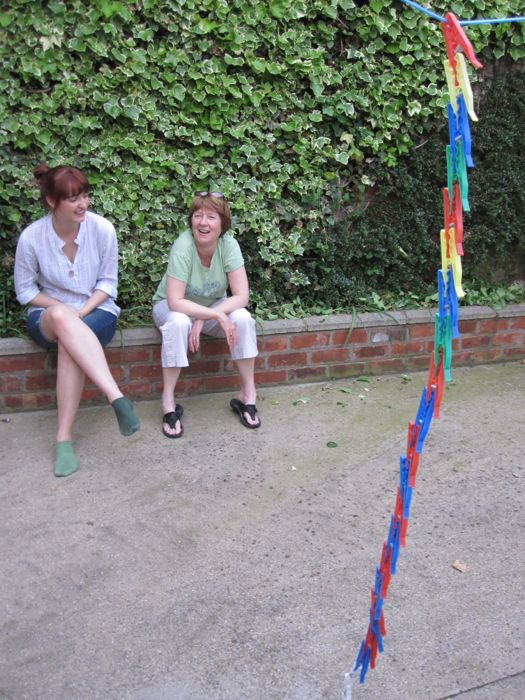 Later that night, us guys broke away for “Man Night: Part 2” to watch Goodfellas in Andrew’s room, first stopping at St John’s Takeaway to order pizza. I had never seen the movie before, but I found it really good. We wondered why we guys — and there were so few of us on this semester abroad — never did this before. But I guess that’s how things go sometimes. (Funny sidenote: John and I walked back to the Grange together, and we noticed a sandwich shop called Goodfillas. How did I not take note of that before!? It seemed like I kept finding little things like this about York at the end.)

Saturday I worked more on my Eliot essay. I did take a break to get a pasty in King’s Square, where a man approached me — actually sat down right next to me on the stair I was sitting on — and asked if he could have a bite. I don’t know if he was homeless or just hungry or poor or what, but I never know what to do in these situations. I said no and tried to ignore him. I might’ve give him a pound or two so he could buy his own pasty, but I was too afraid to pull out my wallet, for fear he would snatch the entire thing out of my hands. I didn’t risk it. Soon enough he left me alone. I think I would’ve felt bad or guilty in any case, because in those situations you just don’t know what they’ll do or if they really need help or how to best help. It was a little more scary than the “faux mugging” I had in one of my first days in York, just because this was so in my face, whereas the other man gave up as soon as he realized my accent was not from around there.

Sunday the 23rd of May, I finally finished my Middlemarch paper. I celebrated by buying myself a sandwich at the York Hogroast. The day was hot and humid with almost zero clouds. York was getting its foretaste of summer.

I went to sit near the York Minster but was surprised to find a large gathering of people with torches and flags. No, it wasn’t the village people coming to ransack the church — it was a Pentecost or prayer gathering headed by the Archbishop of York. Only one of two archbishops of the Church of England. I didn’t have my camera on me — a rare occurrence on this trip — so I was sort of mad at myself for not being able to capture this awesome moment. But, thinking on it again, I’m glad I didn’t have my camera. It gave me at least one special moment that I didn’t or couldn’t capture with a photo and just my mind, and that was important, too.

We had a party at Carrie’s flat that night to celebrate the beginning of summer break for the most of us. It was sort of anti-climactic, but very nice knowing our last days in England were free of homework and could be used to soak up as many last-minute memories as possible. I video chatted with home once again afterward, explaining that I was done with the “school” part of the semester. Hooray!

Monday I finished my souvenir and gift shopping around the city and took photos of places I wanted to remember. Having lived in the city for a few months, I always put off taking pictures of the places that had become semi-normal to me, so now was my last chance. I made sure to stop at the National Railway Museum again to buy a few posters. The NRM had the best posters in town.

After dinner, Megan asked if I would show her the way to walk the entire city walls, since she hadn’t gone around them yet. It was a good walk, and it gave me excuse to give the walls another go-around, too. Then we went to the Student Union for drinks after 9 PM. Mostly I had avoided the Student Union pub all semester. The SU was not my favorite pub, but we still had a good time. The drinks called “Diesels” were delicious.

Tuesday Dean had planned a special outing, or, final excursion, for those of us left in York (a few had already headed home). He bought us tickets to see William Shakespeare’s King Lear, put on by the Royal Shakespeare Company, in Stratford-upon-Avon, the birthplace, home, and burial place of the bard.

The coach ride to Stratford was about 3 hours from York. We left around 1 and got there at 4, enough time to explore the town a little bit and have dinner before the show, which was being put on at the Courtyard Theatre.

I went to see Shakespeare’s burial place first, just up the road from the theatre, with a few others. I liked the “curse” on Shakespeare’s grave, warning not to move his bones. 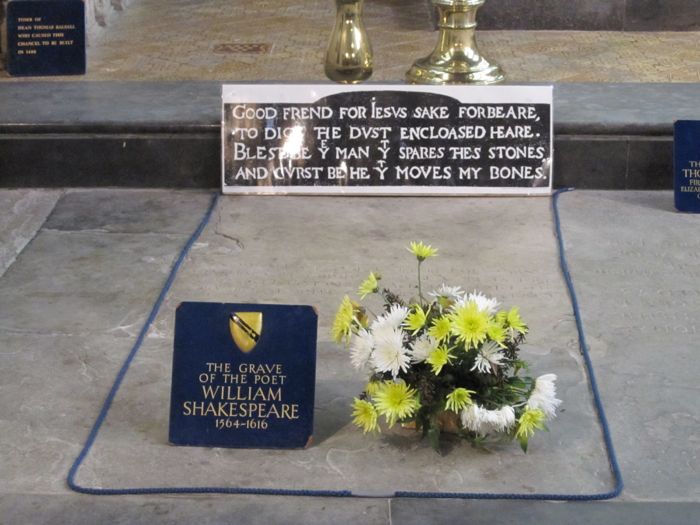 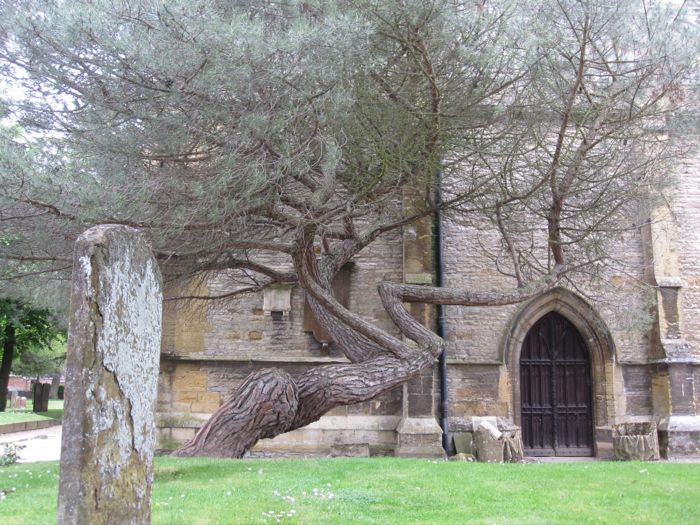 Gnarly tree outside the church where Shakespeare is buried

I went to dinner at the Garrick Inn with some of the girls, ordering a “deli board” for my dinner. Really it was a sampling of meats, cheeses, and sauces but it’d do for a meal. I liked the mango chutney sauce the most. 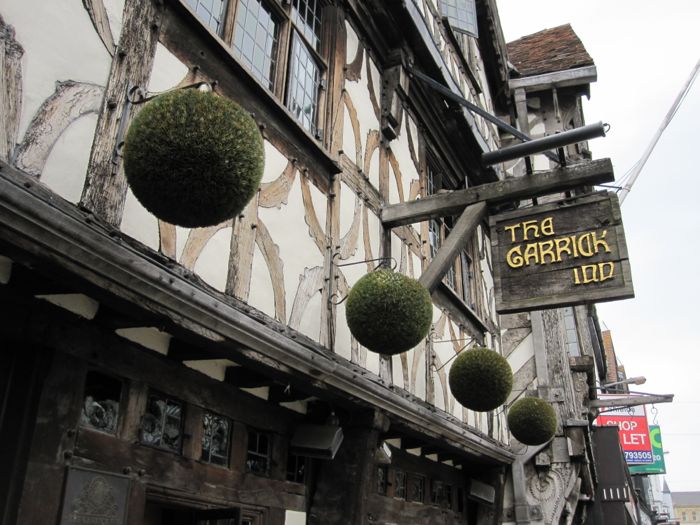 The Garrick Inn, the locale where we had dinner in Stratford-upon-Avon

I split off by myself after dinner to explore the Bancroft Gardens on the River Avon, a small park of sorts with a memorial statue to Shakespeare, surrounded by four of his most famous characters. I didn’t have enough time to go see his birthplace and home, too, which I would have liked to, but I guess it’s good to always leave something for a next time. I had to get back to the theatre not to miss the play. 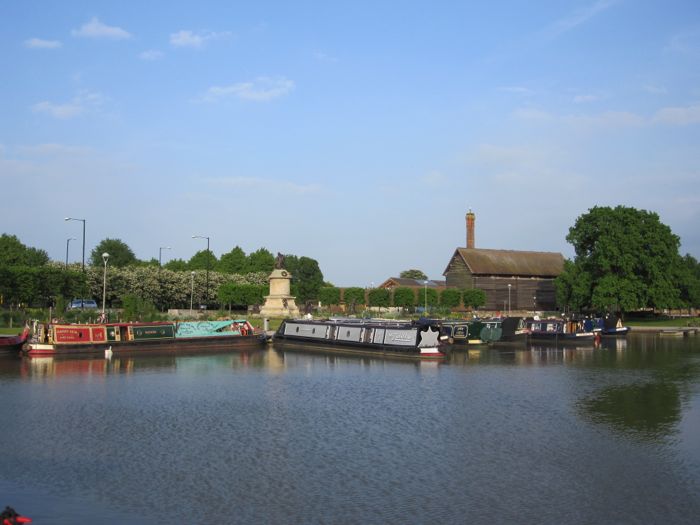 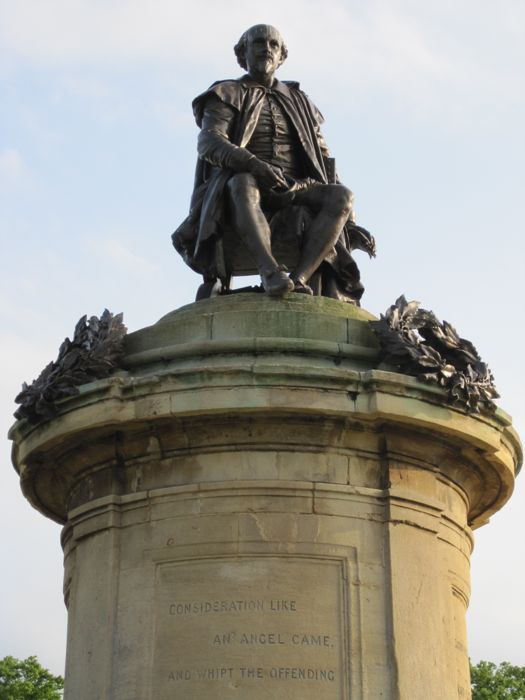 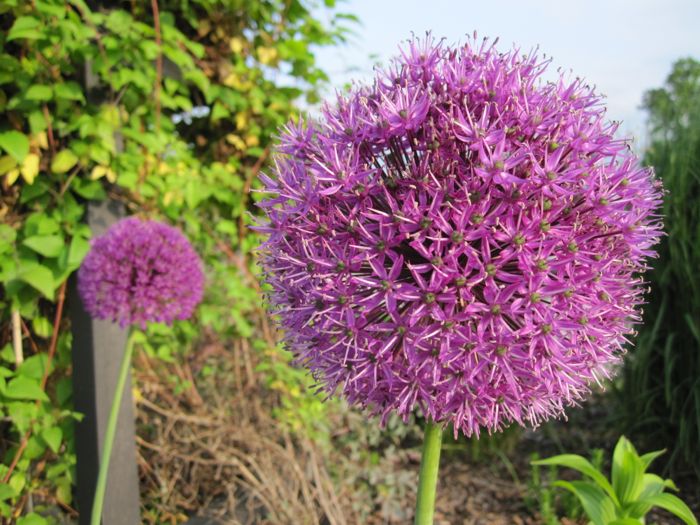 Allium in the Stratford-upon-Avon Bancroft Gardens

The play itself was fantastic. The acting was great, especially the players who portrayed Lear, Kent, and the Fool, I’d say. I think the woman who played the Fool was the same person who played Mrs. Figg in Harry Potter and the Order of the Phoenix — Kathryn Hunter. The special effects were cool for a staged play. There weren’t many props or sets per se, but the rain and storm scene with King Lear was simulated well. The whole play had a whole medieval/early modern/1920’s mixture look — I’m not sure of the reason, but it worked well. 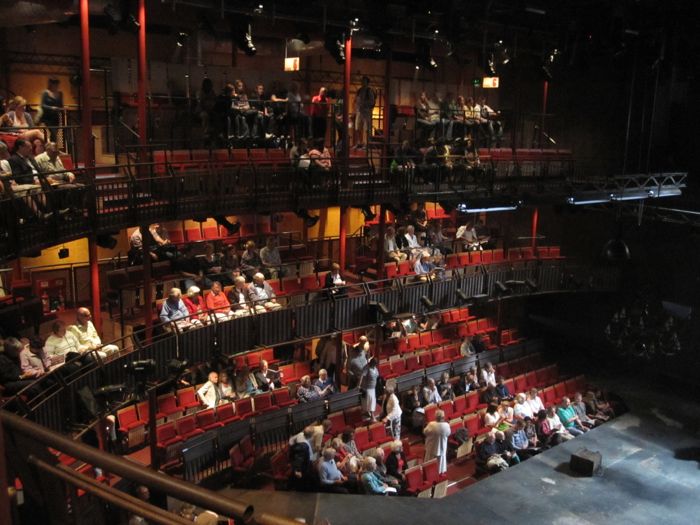 Inside the Courtyard Theatre, Stratford-upon-Avon, before the performance of King Lear 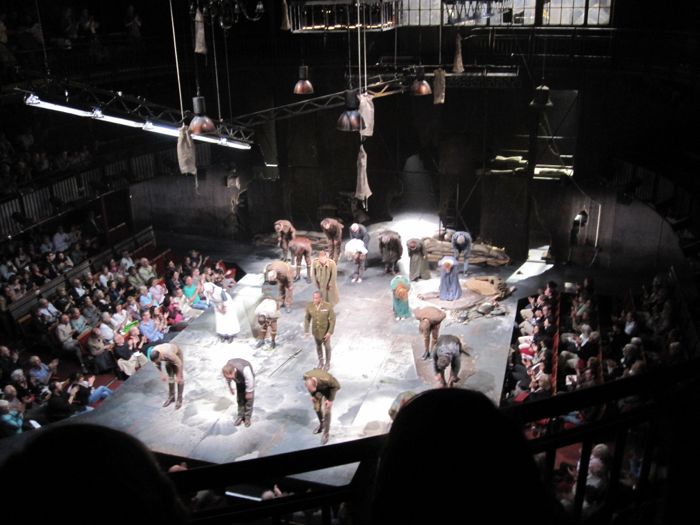 The actors bowing after their fantastic performance of King Lear

The play got out at 11 PM, so we didn’t get back to York till 2 AM. The coach driver was nice enough to drop us Grangers off at the Grange so we didn’t have to walk all the way.