The morning after Stratford-upon-Avon, the caretaker of the Grange came to check my room and sign my quittance forms. All he really did was toggle all the drawer knobs and door handles, and that was that. Never had an easier check out in my life.

I worked on a card that we all would be giving to Megan that night at our graduation/farewell-to-York/end-of-semester party. Megan, one of the seniors left behind, who was missing her graduation ceremony at home, was being specially honored. I made a punny on the card, a parody of the Calvin seal: instead of drawing a heart in a hand, I drew a card in a hand, and wrote, “This card we offer to you, graduate, promptly and sincerely… upon your graduation from Calvin College.” I went around to get the card signed by as many of us as I could during the afternoon. I also spent the tie making a card of appreciation for Dean and did my last load of laundry and began packing my suitcase so I wouldn’t have to do it all later.

For the party, Eva and Teresa decorated Dean and Nancy’s house. They hung ballons, the English flag, and streamers. Lots of good snacking food was placed out. Grapes, nuts, brownies, cake, crisps. Eva played “Pomp and Circumstance” from her laptop, we put the graduation cap and an English flag as a cape on Megan. We also gave Dean a box of memories–complete with a George Eliot quotation on the top–and our cards at that time. We made some jokes that he should read all these nice cards before grading our papers because maybe it’d improve our marks.

We spent the night reminiscing about the past semester and how it went by all too quickly. (One funny moment for me was how Kyle found out it was okay to call me “Will” as opposed to “William,” and how he had always wanted to call someone “Will.”) Oh, all the good times to be had on Markham Crescent.

Some of us headed to the cocktail bar called Dusk afterward. It was pouring rain on the way there, but we warmed up inside with out cocktails. Dusk has the most amazing drink I’ve tasted to date. It’s called the “Milky Bar Kid.” It’s sort of like a White Russian, but almost has a Nestle-like edge to it. I spit 2 with Kyle because drinks were 2 for 1. Some of the others had been to Dusk a time or two before, but I wish I had discovered it earlier. Sometimes it seems like you discover the best things about a place just as you’re about to leave it.

We walked Fran to the Railway Station early this morning. She was headed to Amsterdam. She called me “William’s Wish Wellingtons,” once again, and told us that we had made this semester “surpass” her previous one. We definitely could have said the same about her.

We went to our last breakfast in the dining hall. A full English one for me, of course. I finished most of my packing after that, so the rest of the day was left to go soak in York one last time.

We walked the city walls one last time. It was nice to hear the bells of York Minster chiming in the distance as we made the loop around the city. 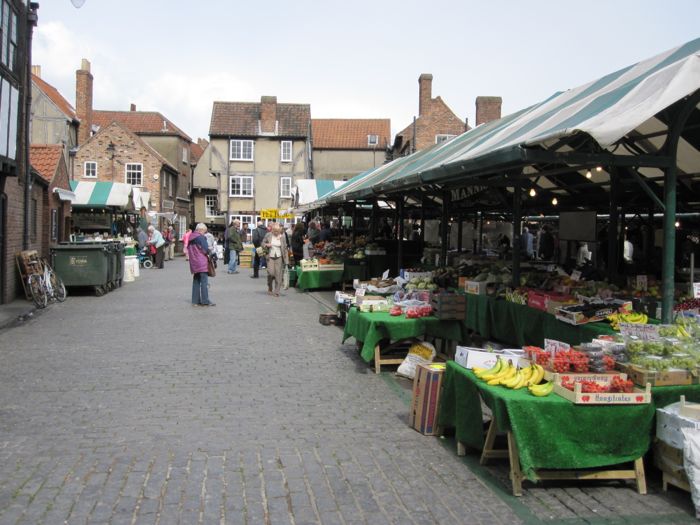 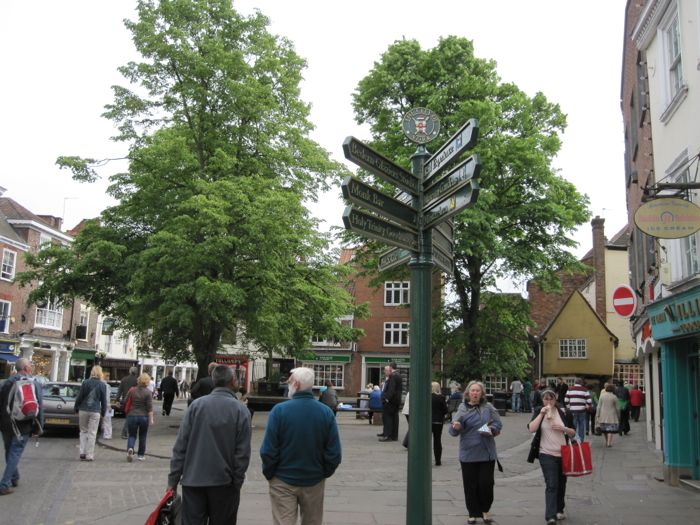 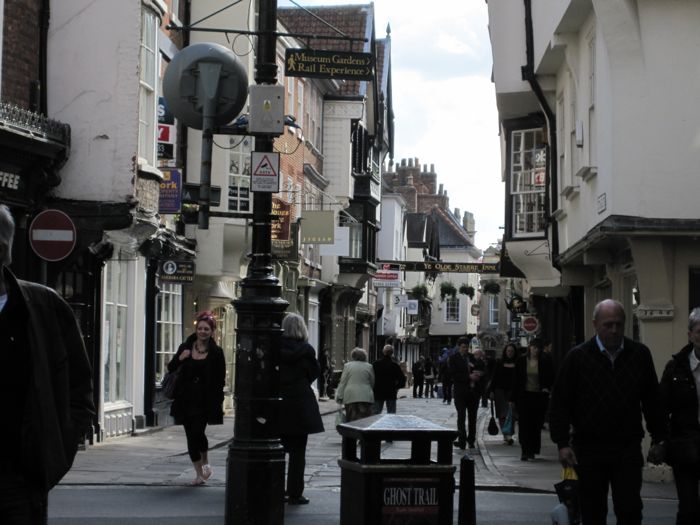 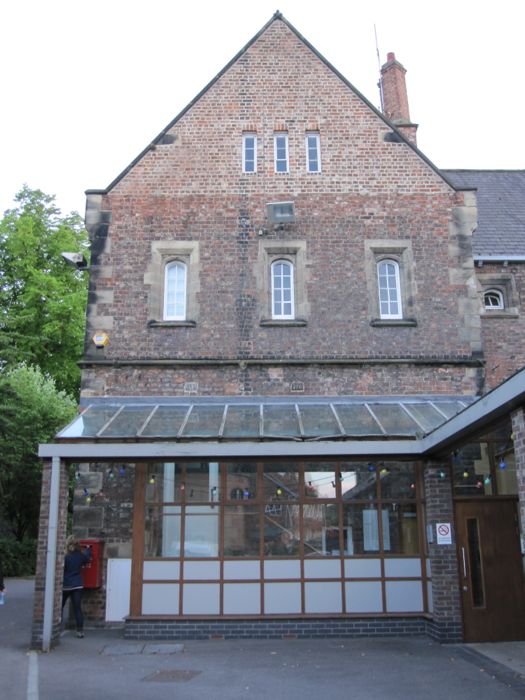 The building where Dean’s office is, one of the top windows

Some of the girls headed to the top of York Minster later since they had not made time to do that before, and I went off to poke around in the National Trust store. I found a cool Wellington boots keychain that I bought because it reminded me of “William’s Wish Wellingtons.”

I walked up and down and around York’s streets one last time. Through the Shamble and Newgate Market and around Dean’s Yard and York Minster. I settled into Caffè Nero one last time to have a cup of hot chocolate.

One really cool thing that happened to me after leaving the cafe was, a British couple asked me for directions! That may not seem like a lot, but it was meaningful to me. Instead of sticking out as an American touristy sore thumb, on my last day, it seems that I must’ve looked like I knew where I was going and what I was doing, and it was true. And the askers were British, which tops it all off. (They asked where Exhibition Square was.) It was a bit awkward though, because it was one of those cases where I showed people the right way to get somewhere, but then they followed me for a while because actually, I was headed that direction, too.

I had my last dinner in the dining hall. Pizza and a 40p roll. Ironic that it wasn’t an English meal, but hey.

Later, Eva, Jenica, Mary, Melissa A., and I went down to Dame Judi Dench walk along the River Ouse. We took a lot of crazy pictures. Too many. We tried–but failed every single time–to get a “jumping” picture. You know, those pictures where everyone’s midair? We were basically as silly as could be.

And as our final act we went to lie below the York Minster. Yeah, that sounds weird, too. But if you’ve ever seen the York Minster in person you know its majesty. It had become a symbol of our semester, a spiritual guide for our our little lives in a city called York. Oh, how I wish I had Wish Wellington’s for real. I wish I could linger a little longer under that stained-glass facade. 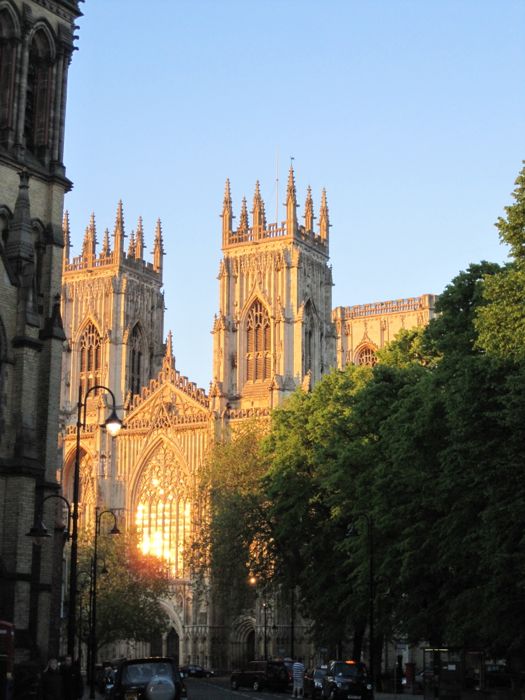 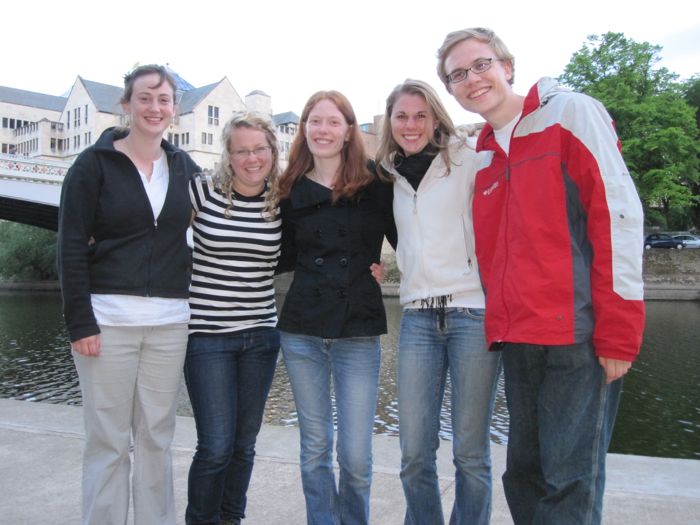 Melissa A., Jenica, Mary, Eva, and me on the River Ouse, our last night in York

The rest of the story is just zipping up my suitcase, munching on Jaffa cakes, and video chatting with my family one last time from abroad, knowing that the next day I’d be seeing them in person again.

Got up at 5 AM, and boy is it bright at that time of day at that time of year in England. I wasn’t particularly hungry, but knew I should eat something. It was going to be a long day.

I rolled my luggage down to the meeting area, knowing I wouldn’t be able to get back into my flat after I left my key behind. Do I have everything? Yep.

Well, we didn’t leave York without a hitch. Maybe York didn’t really want us to leave. Melissa L. had forgotten her passport in her flat. Good thing we were only five minutes away when she realized it, but I think going back to get it made our hearts beat a little faster. We would’ve been cutting it close to get to airport in any case, since we had to drive all the way to Manchester.

Since boarding was soon, Dean convinced the airlines staff at the counter to start a fast line for us. I was first in line, only because I was standing closest to Dean. They weren’t going to let our plane leave without all of us, but it still felt like a rush. Other people had a harder time at the desk, like Julie, whose suitcase busted open. That, and few other small incidents, made everyone antsy to just get the flight over with and get back to the States.

It was weird to hear the American Midwest accent on the loudspeakers once we arrived. Do we really sound that nasally?

Our last flight to Grand Rapids was a very small plane, and we took up most of it. I think only 2-4 of the passengers were not with our group, it seemed. We were all excited to see our families again. Some of us said, “‘Murica!”

‘Murica. Yup that’s home. But even more than that, my family is home. It was good to see my dad, mom, Philip, and Jessica again. And you can imagine all the hugs and kisses and coming back to a familiar place.

What was it I just did again? I’m not entirely certain. I think I’ll be processing this semester for the rest of my life.